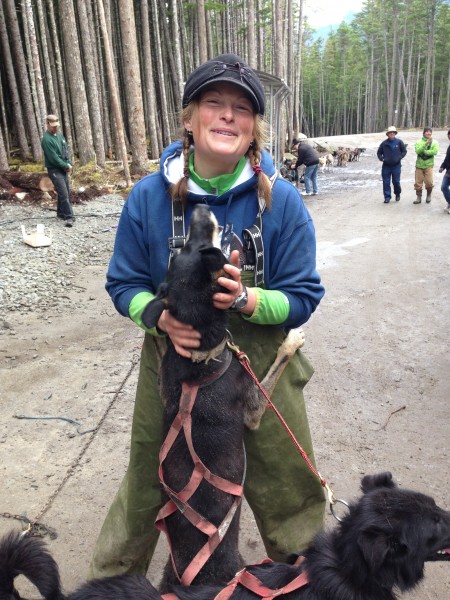 Musher Marian getting a big hug and kiss from one of her fur kids! – Skagway Alaska

Alaska’s famous wildlife makes for superb viewing, but give me a well-trained pack of Alaskan sled dugs for a summer wheeled sled ride and then some puppies for cuddling to complete the Alaskan native “animal” experience. Mix in some spectacular mountain views and some Alaskan tall tales, and you have a very memorable visit to Skagway, Alaska. Alicia, from Charleston, and her 2 sidekicks picked us up at the pier and drove our group of 20 through the Chilkoot mountains with their gorgeous views of nature and wildlife to the mushers base camp. 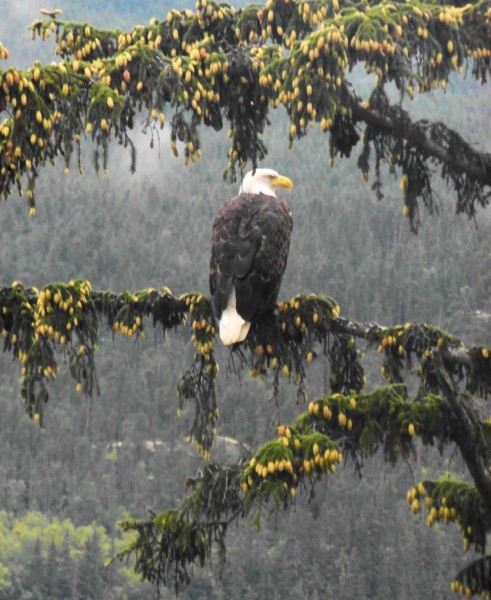 A bald eagle hanging out near his mate on Taiya Inlet near Skagway, Alaska!

Along the way, we heard many interesting and amusing Alaska tales. Among the most notable was that John Nordstrom earned enough money in Alaska to launch his very successful Nordstrom department store business out of Seattle. And Levi Strauss launched his jeans business to help clothe the locals and the miners before bringing it to the “lower 48”. 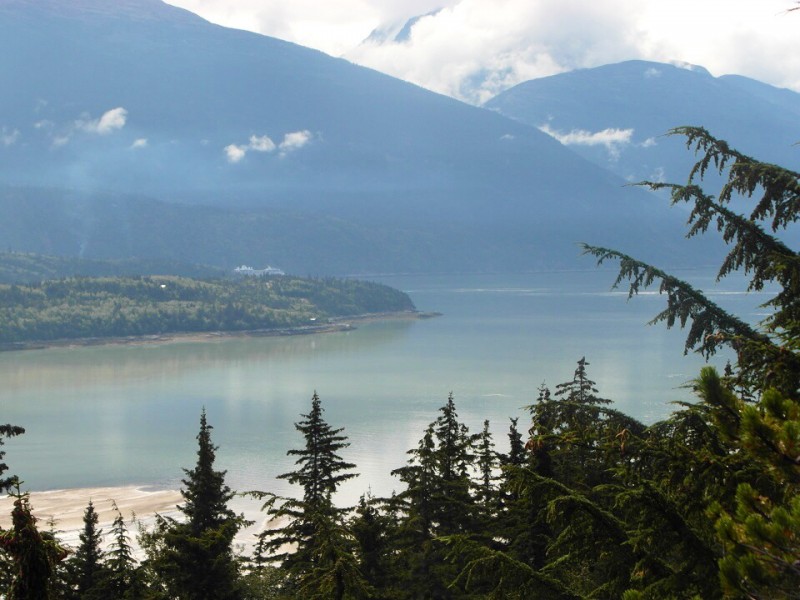 Once we arrived at the mushers’ base camp, we changed over to an awesome unimog open-air expedition vehicle to go up the steep, rocky mountain roads a good 800 feet to the camp where the sled dogs do their summer training and work to earn money with their mushers to finance the mushers’ racing lifestyle over the winter months. 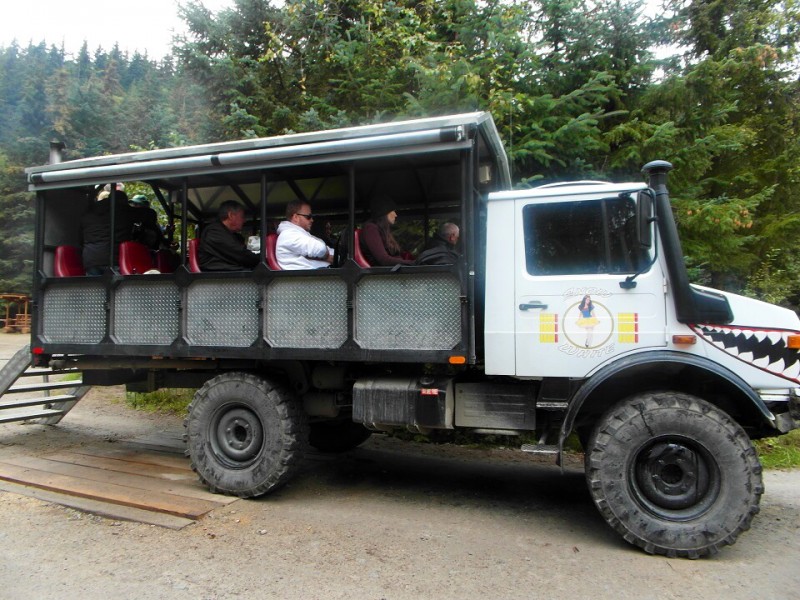 Where these mushers and their dogs used to be an essential part of the Alaskan transportation system and earned their living in transport, they have been replaced in the 20th century with more modern forms of transport from the snowmobile to the airplane. Consequently, the musher lifestyle has changed from paid transport to competitive sport. Not too surprisingly, the most popular national sport in Alaska is — you guessed it — sled dog racing. And these races are not just a Saturday afternoon affair. Not at all. Alaskan mushers and dogs are fierce long-distance competitors, with the most popular race being the Idetarod trail sled dog race which is an international competition that begins in Anchorage and ends in Nome, a distance of over 1000 miles, often in white-out conditions, over some of the roughest terrain Mother Nature has to offer. The musher and his well-trained team of 16 musher dogs aim to do the race in 9-15 days. 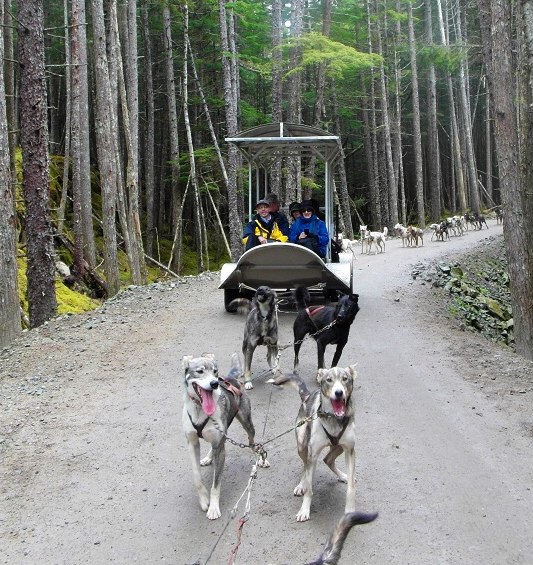 Summertime sled ride with our team of 16 dogs! – Skagway Alaska

Keeping that seriously “competitive” image in mind, know that the heart of our excursion was to have a ride with a musher and his or her team of 16. While most mushers are men, there are women who participate in the sport and we had the distinct pleasure of having one of them as our musher for our dog sled experience. Now I have seen many a dog eager to go out for a walk or an adventure, but multiply that “eagerness'” by 16, and then add in a well-bred seriously competitive nature, and you are in for a wild and fun-filled dog sled ride! At one point, I seriously wondered if we were going to turn over, and at another point, Marian, our musher, stopped the team because 2 dogs actually got into a bit of a fight as one was forced to make a turn too close to a tree for his peace of mind. The dogs yelped and barked, we hooted and cheered, and well, I had images of a college football game or some other fiercely competitive and loud sport … except that the image of these 16 canines running as if their lives depended upon it in front of me was, despite the momentary wrestle, frankly more civilized than a bunch of football players. 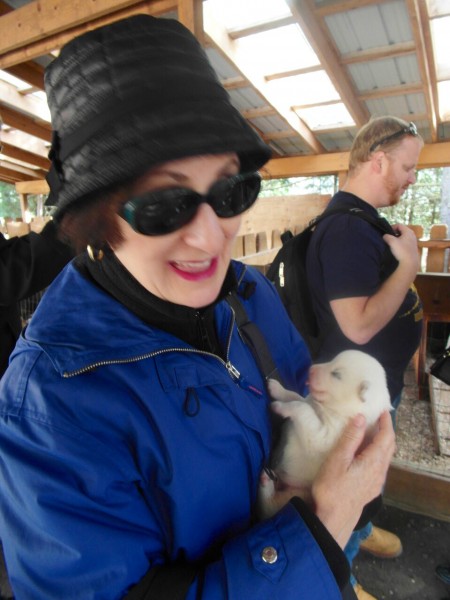 You probably noted that our sled dogs do not look like the traditional Alaskan Husky or Alaskan Malamute breeds. That’s because these days, most of the sled dogs are mixed breed, bred with long distance runner breeds like Grey Hounds, to produce a dog who is lean and fast as well as able to handle the fierce cold and winds of Alaskan winters. 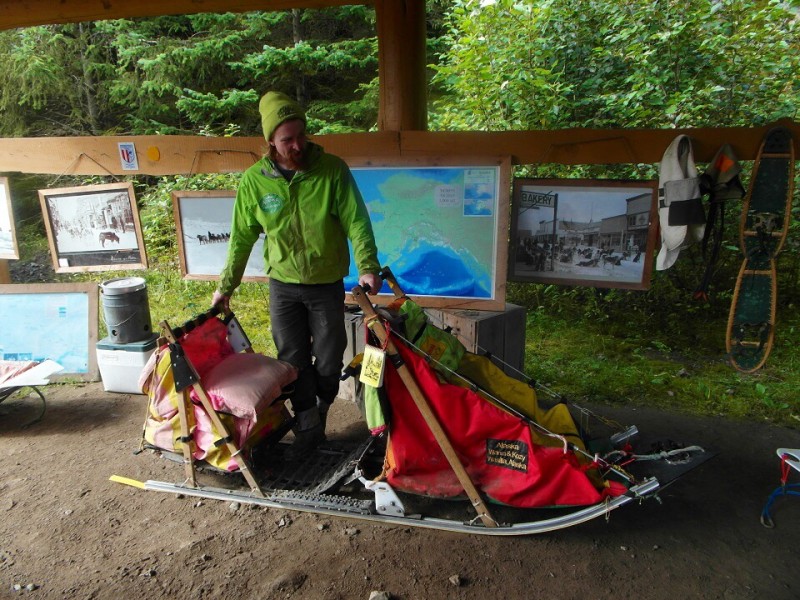 Our visit to the Skagway Sled Dog and Musher’s Camp was capped off with a talk by John, one of the mushers who competes in the Alaskan long-distance races, and then by dessert: we got to visit with and pet and hold some truly adorable sled dog puppies and meet their mothers and siblings. I lucked out with the most cuddly puppy of all only 9 days old. Parting was such sweet sorrow !