In 1968, Time Life Books released a new book about cooking, “Recipes from Italy”. Up until then, my idea of Italian food did not extend much further than veal piccata, spaghetti with meatballs, or pepperoni pizza. But my girlfriend was intent on becoming a good cook, and, following carefully the instructions from the book, she cooked a mouth-watering Spaghetti alla Carbonara which introduced me to the delights of real Italian cuisine.

The recipe was a slightly Americanized version, using bacon instead of pancetta and adding cream to the mix. But the smooth velvety texture of the egg-covered pasta combined with the meaty crunchiness of the bacon allied themselves perfectly with the pleasing taste of the dish. From that point on, I was hooked, not only on spaghetti alla carbonara but on Italian cuisine.

Being an international business executive, I was traveling around the world two and a half weeks a month so I had plenty of opportunities to savor Italian food in Italy as well as in Italian restaurants in other countries. I also learnt from my wife how to cook spaghetti alla carbonara and made it a regular offering in our home. By that time, Il Cucchiaio d’Argento (the Silver Spoon) cookbook of Italian recipes had a prominent place on our kitchen shelf. 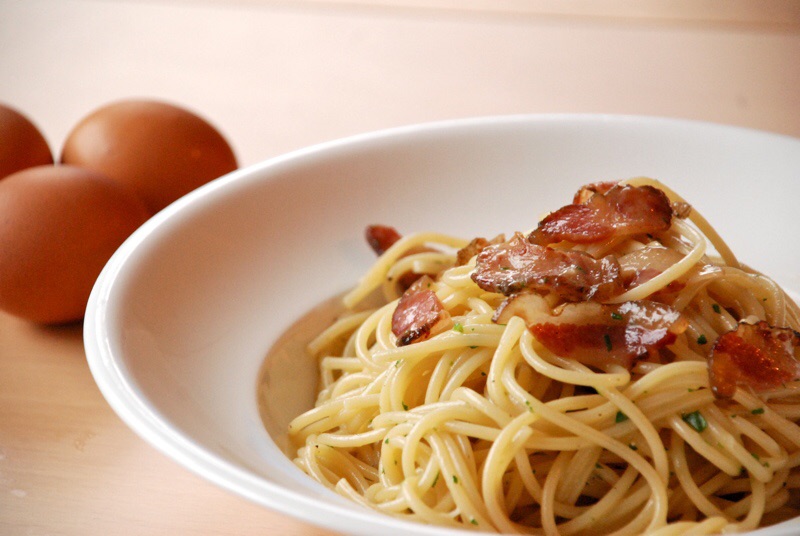 I discovered and enjoyed many of the wonderful dishes which each region of Italy offers and became a strong advocate for Italian cuisine. But I always have had a special place in my heart for spaghetti alla carbonara, and I made it a practice over the years to look for that particular dish on the menu of Italian restaurants around the world. When spaghetti alla carbonara appeared on the menu, I often ordered it, if only to compare it to “my” recipe.

Unfortunately, I have almost always been disappointed by the restaurant versions of the dish, particularly outside of Italy. Often, the dish comes bathed in a liquidy sauce; sometimes, peas or other vegetables are added. I believe that spaghetti alla carbonara should have no more eggs or cream than necessary to envelop the strands of pasta, and pancetta should be the only additional ingredient.

I would actually argue the opposite. The mark of a great chef should be his ability to turn out fine spaghetti dishes and there are plenty of splendid spaghetti dishes to choose from in Italy. I can think of no better test for a chef than his ability to turn out a mouth-watering spaghetti alla carbonara! Is it any wonder that the girlfriend who first cooked spaghetti alla carbonara for me has now been my wife for more than 40 years?

« Faroe Islands, best island destination in the world!
BonVoyageurs among Top 100 Travel Tweeters in the world in 2014! »