The Vienna coffee house is an institution which dates back more than three centuries to 1685 and which has since then become an intrinsic part of Viennese culture. Coffee drinks served with a small (and sometimes large) glass of tap water, mouth watering pastries, a wide choice of newspapers, marble tabletops with the iconic Thonet chairs, elaborate decor and an invitation to stay and linger are hallmarks of what became known as a Viennese coffee house, a style of cafes which also spread in the nineteenth century to other cities of the Hapsburg Empire such as Budapest and Prague. 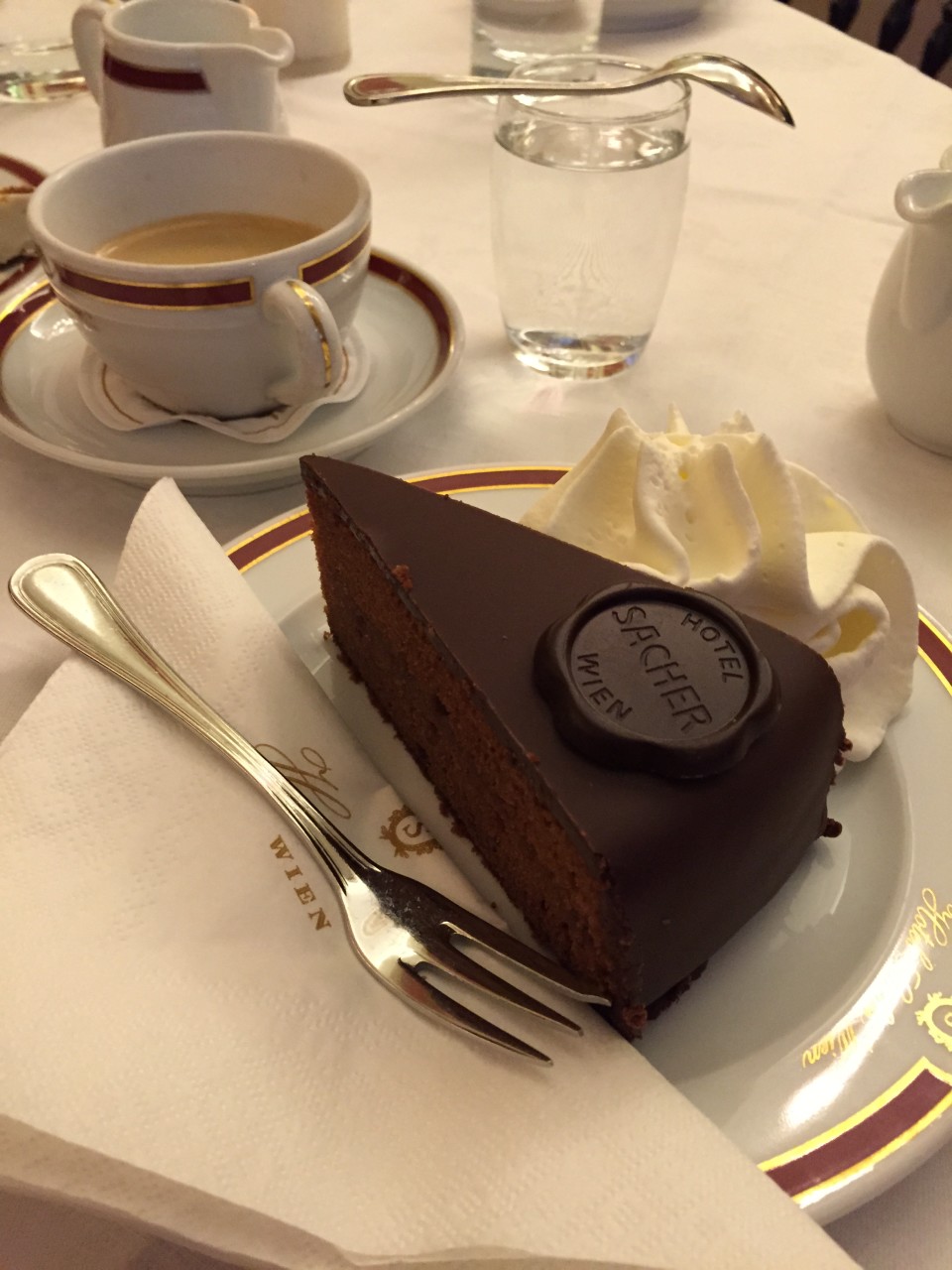 Threatened by the fast pace of modern life and the rise of “espresso” bars, the traditional Viennese coffee house may not be as popular as it once was and there are not as many in Vienna as there used to be. I have read somewhere that there are approximately 2,400 coffee houses in Vienna but I confess that I have my doubts whether that number is still accurate. In any case, on a recent trip to Vienna, we elected to take a look at the traditional cafes and coffee houses in and around the central part of Vienna. Since we were in town for only a few days and we also wanted to partake of some of the other wonderful attractions of Vienna, we decided to go “cafe hopping”. I hired a guide/driver and a car and we drove from one coffee house to the other until closing time caught up with us late at night. While cafe hopping may not have been too salubrious for my waistline (I made sure to have a different pastry in every coffee house we visited) or for my ability to sleep that night (thanks to the large amount of tea and coffee I consumed that day), it was an experience that we thoroughly enjoyed and which allowed us to get a feel for the diversity and charm of Viennese coffee houses. By the way, each cafe showcases its own unique version of the “torte”,  as well as many other pastries, so there’s a lot of sampling and tasting to do!

The Vienna Tourism Office had provided us with brochures about the Vienna coffee houses, including one in particular which listed the name and address of coffee houses providing live music, as well as the days and the times for the performances. “Johann Strauss Live” was the title of that section and I wanted to give priority to a visit of those cafes as I was eager to hear some Strauss music in Vienna. Interestingly, we heard wonderful music of all sorts in many different cafes that day, and we visited every single one of the cafes listed under the “Johann Strauss Live” chapter as offering live music that day, but we returned to our hotel that night without having heard a single note of Johann Strauss music. Strauss music seems to have become irrevocably associated with (and apparently limited to) the New Year’s Concert at the MusikVerein and is no longer played live in Viennese cafes! It may also have something to do with cost, as a Johann Strauss live orchestra is certainly more expensive than a single piano player (which is now the norm in all the cafes we visited)

While we thoroughly enjoyed the live music we heard in all of the cafes we toured, I dream of the day when Vienna will be dancing again to the sounds of Johann Strauss waltzes and polkas coming from its wonderful cafes!

Here’s the list of the traditional Viennese coffee houses we visited : 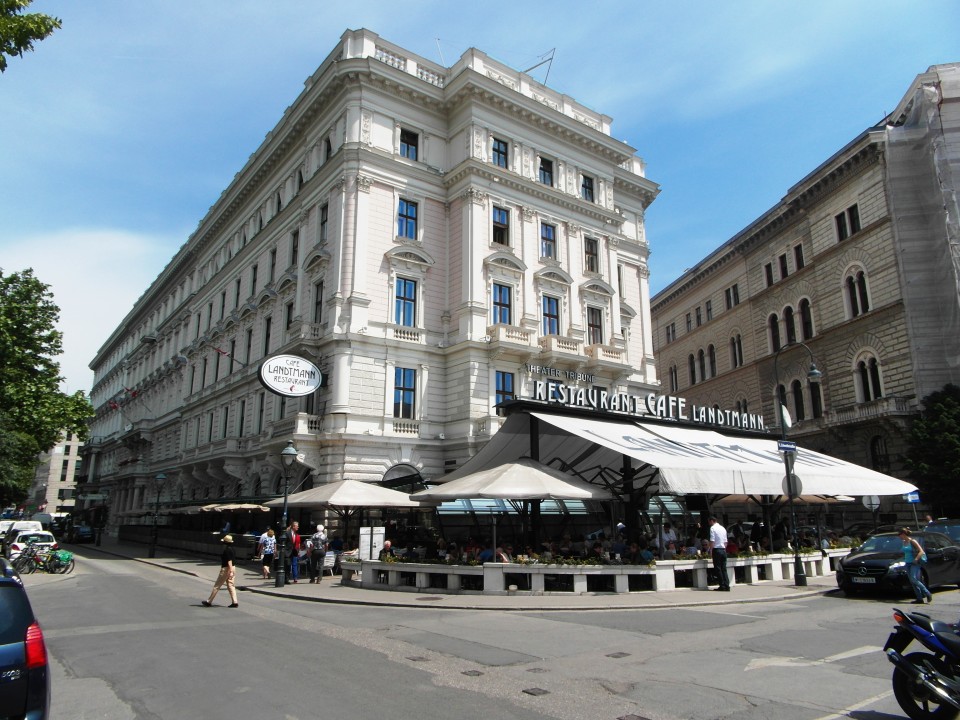 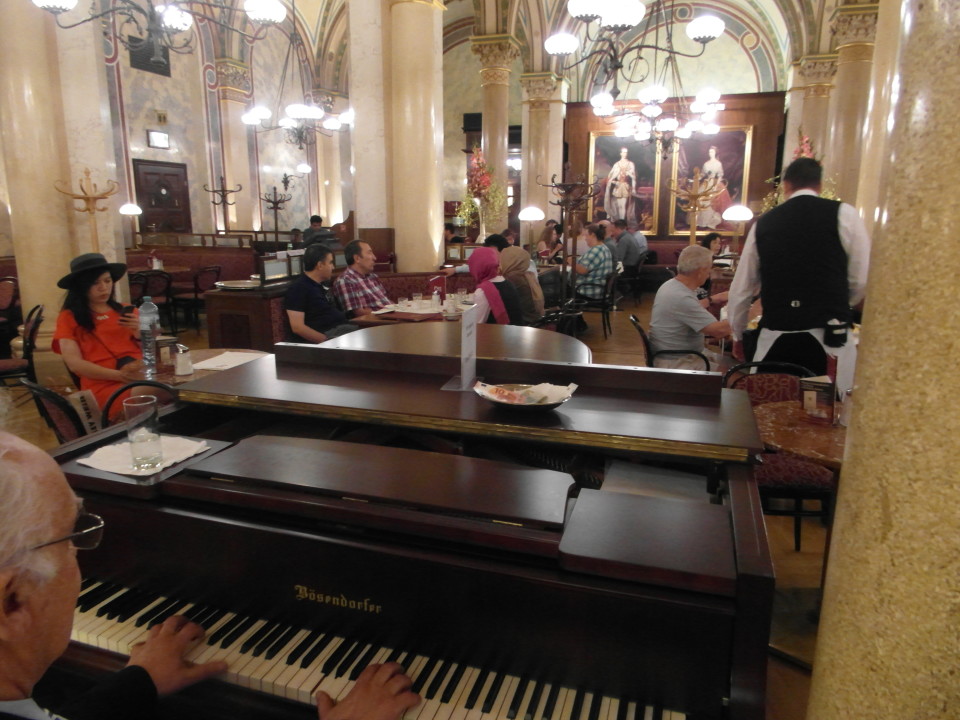 The fully renovated version of a cafe first opened in 1876, Cafe Central sits indeed in the central part of Vienna and probably has the most beautiful interior room of any cafe in Vienna. Its former patrons are said to have included famous historical figures such as Lenin and Trotsky, Adolf Hitler and Tito, Sigmund Freud, etc… 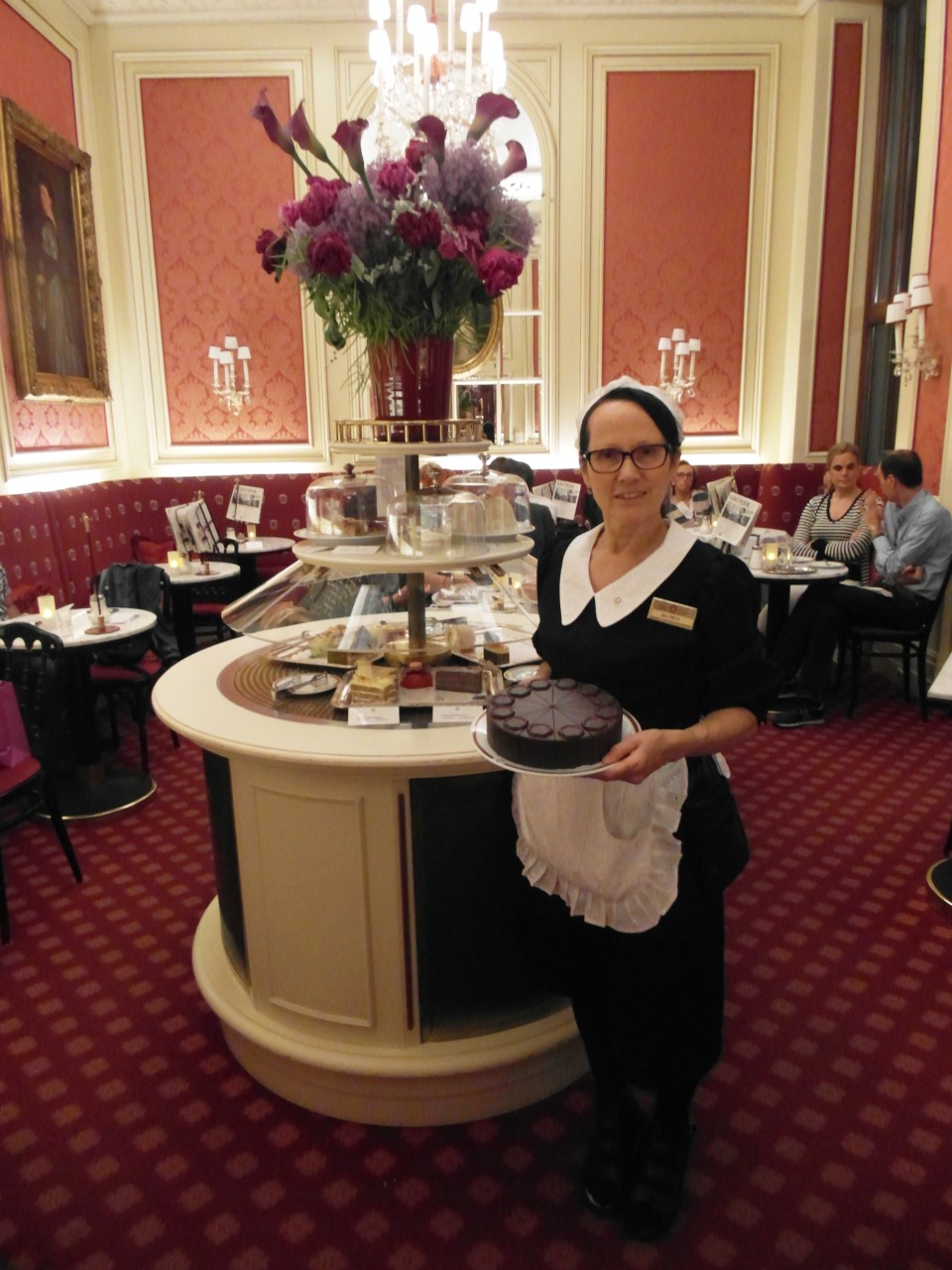 Cafe Sacher is a luxurious cafe located at Hotel Sacher, right behind the Opera House. We were staying at Hotel Sacher during our stay in Vienna and as such, we did not need to make a reservation or to wait in line and could simply be escorted through a side door to a choice table at Cafe Sacher reserved exclusively for hotel guests. What better way to experience the world famous Sacher Torte! 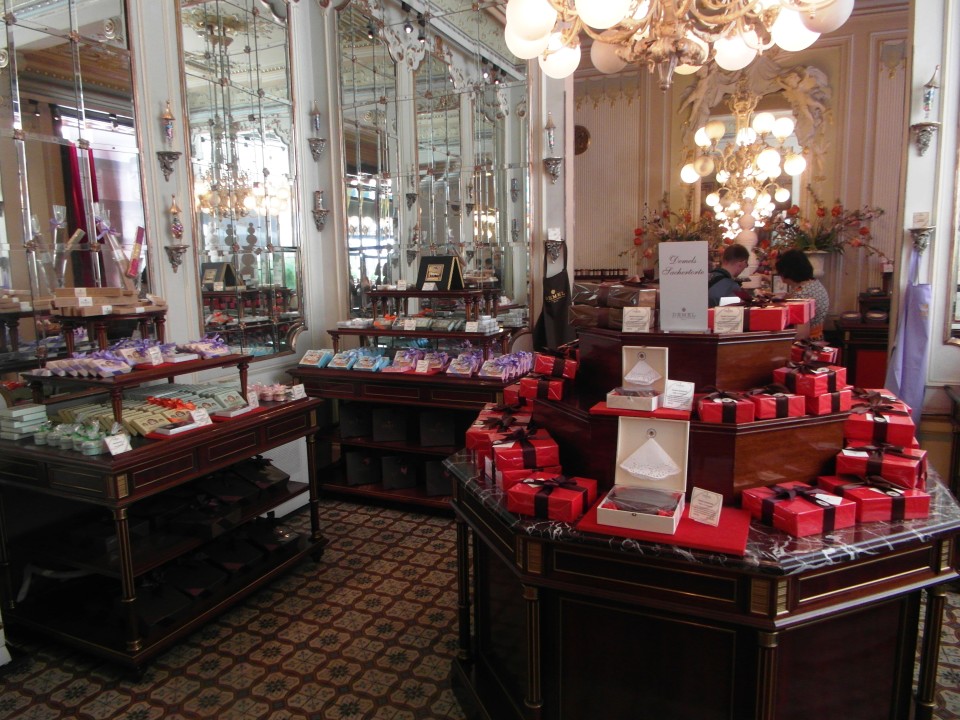 Cafe Demel, located just off one of the most visited squares of Vienna, Michaelerplatz, is not simply a cafe, but also a very successful and large pastry shop and chocolaterie dating back to 1786. Cafe Demel is reputed to offer the finest pastry in Vienna, which patrons can watch being made through the glass-enclosed interior patisserie. Another must when visiting Vienna! 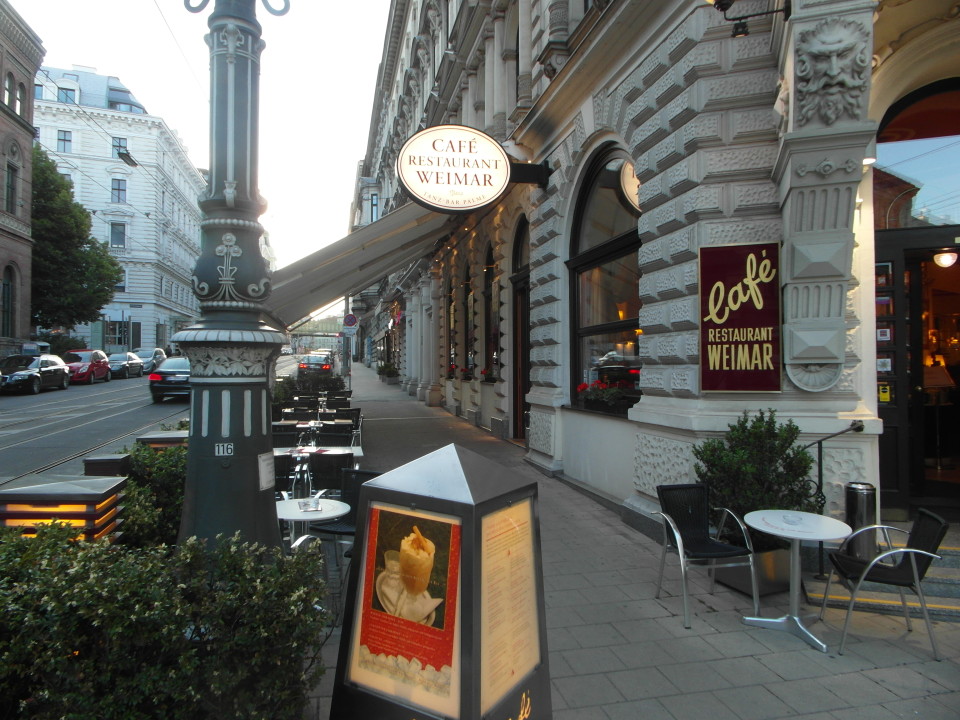 Cafe Weimar is a beautiful traditional Viennese coffee house located near the VolksOper, and has become a meeting point for artists and theater goers. 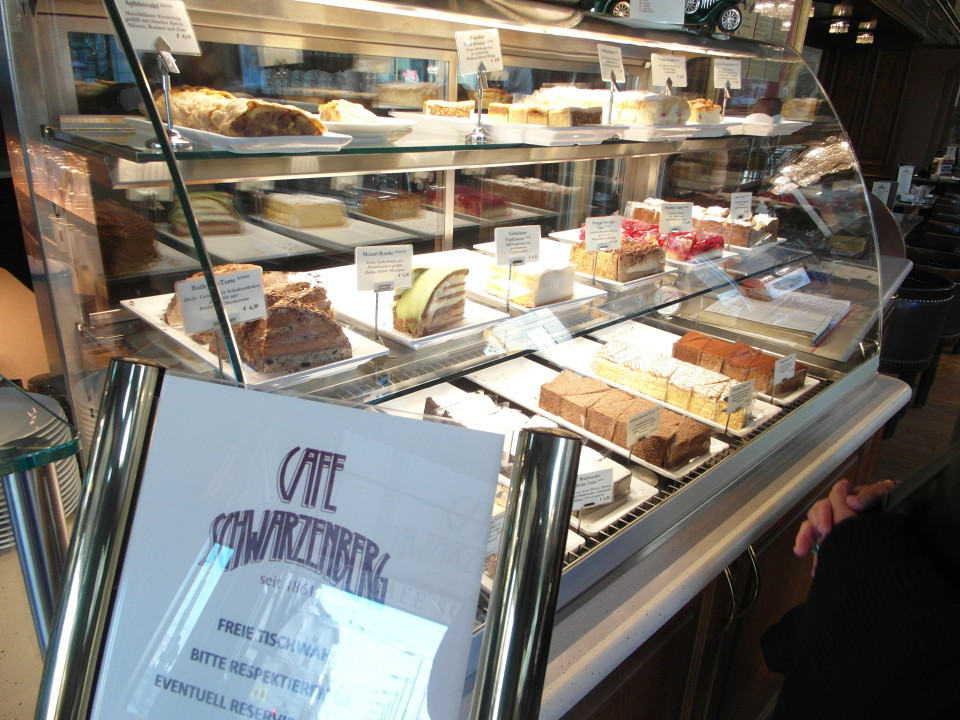 Cafe Schwarzenberg is a very historical cafe dating back to the construction of the Ringstrasse in Vienna in 1861. Because its interior has barely changed since then, it is an interesting cafe to visit. Cafe Schwarzenberg is conveniently located near the MusikVerein and KonzertHaus. 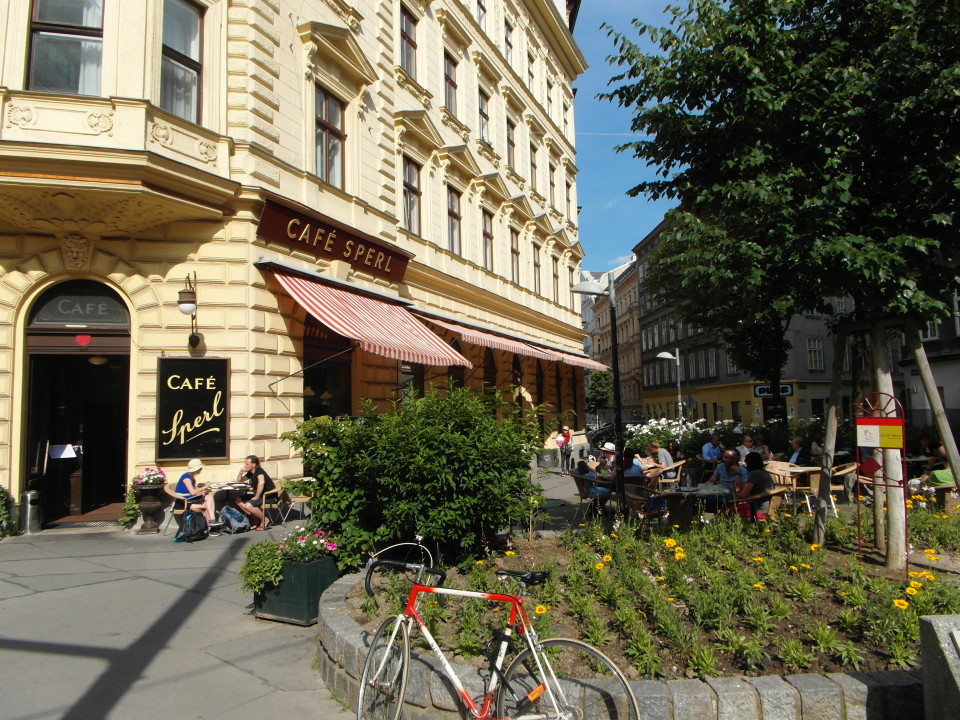 Cafe Sperl is located a short walking distance from the Naschmarkt. Opened in 1880, it has so much character that is has been featured in several well-known movies and has been named “Austrian Cafe of the Year”. 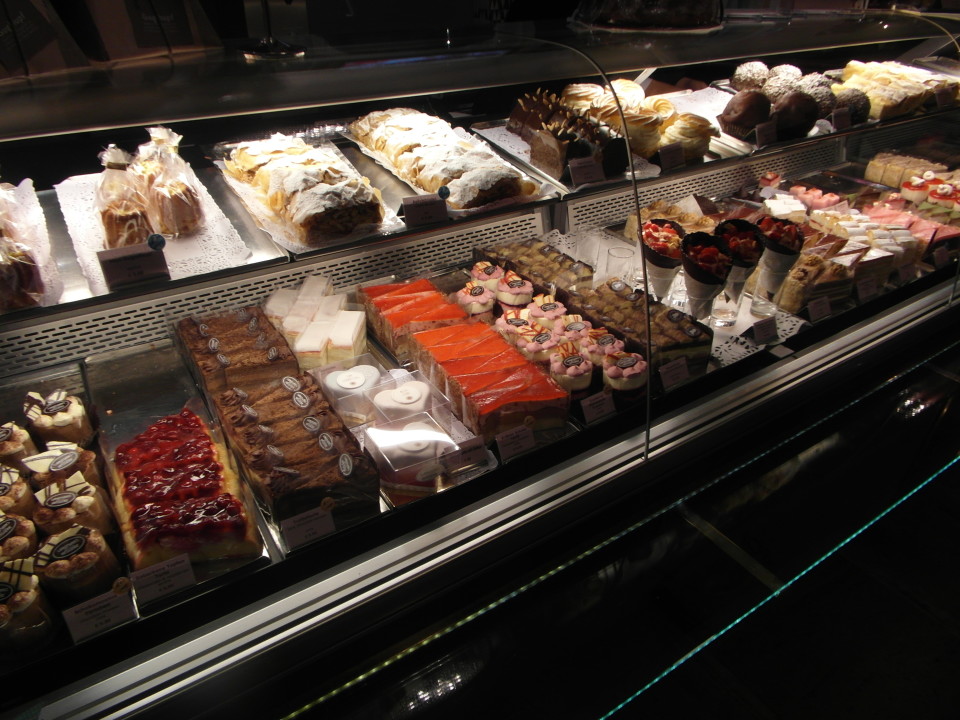 Cafe Griensteidl is probably the best situated cafe in Vienna, right on Michaelerplatz. Founded in 1847, Cafe Griensteidl was the meeting place for Vienna’s intellectuals in the late nineteenth century. 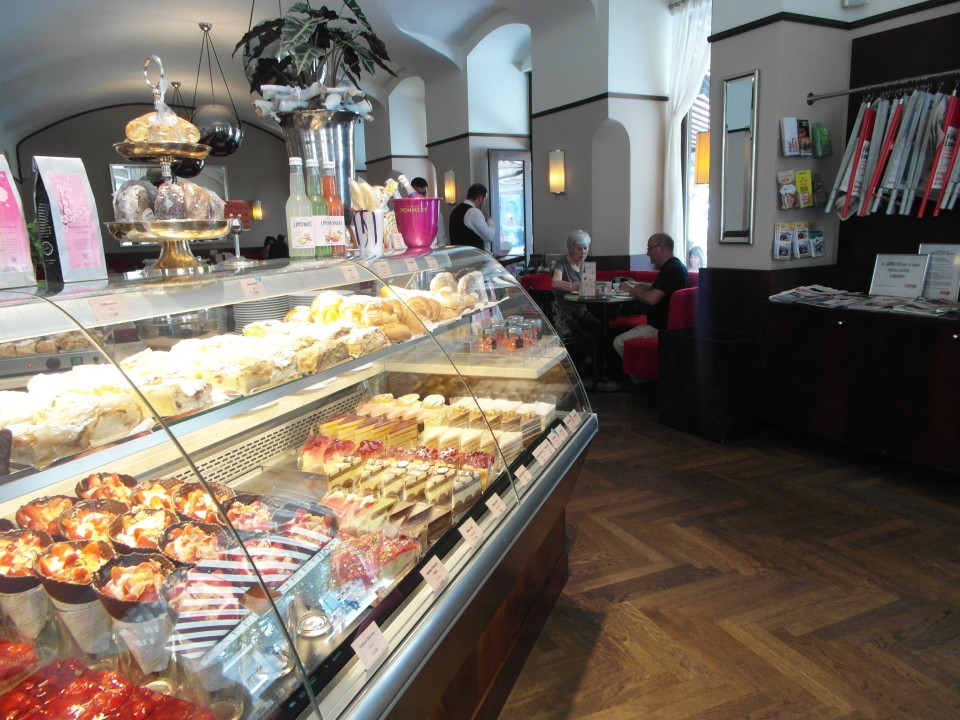 Cafe Museum, opened in 1899 and recently renovated and re-opened, was known as a meeting place for artists. Gustav Klimt was a regular. 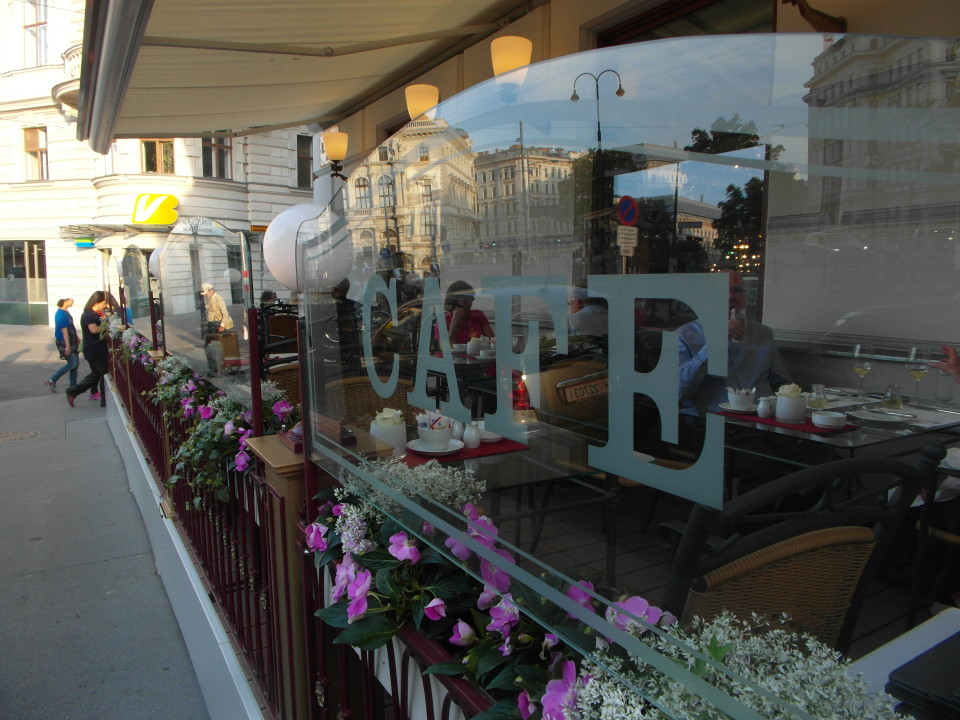 Cafe Imperial, founded in 1873 and part of the world-renowned Imperial Hotel, is a luxurious and quiet cafe catering to a well-heeled clientele. 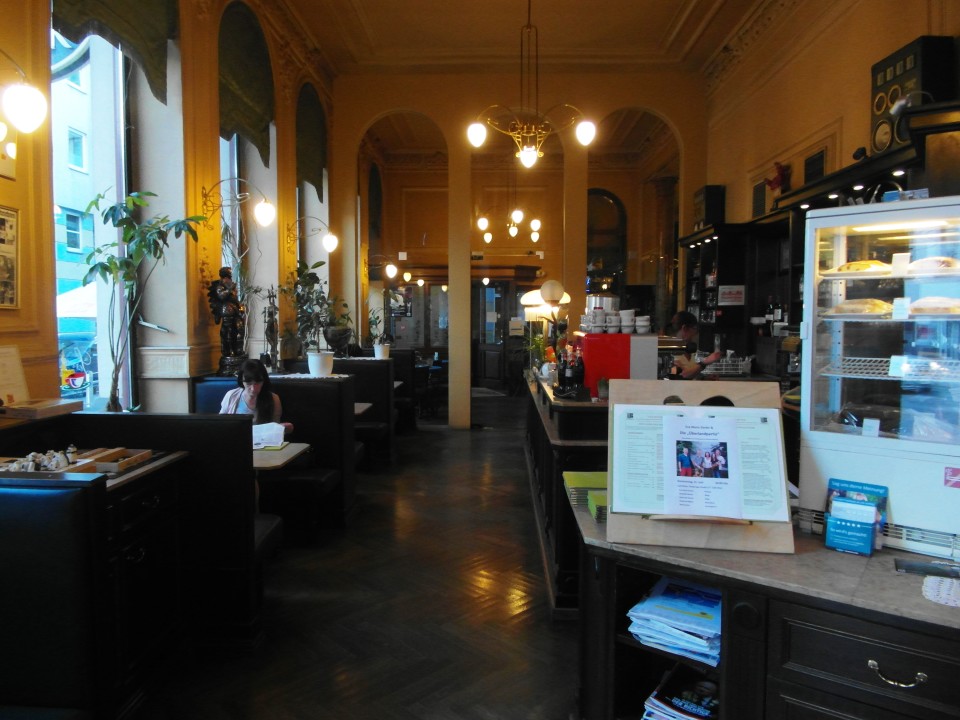 Cafe Ritter lies in the 6th district, a short drive away from the central core of Vienna. We visited Cafe Ritter because it was listed as offering live music on the evening of our visit, although we found upon arrival that this was not the case. A quiet charming cafe in a residential neighborhood. 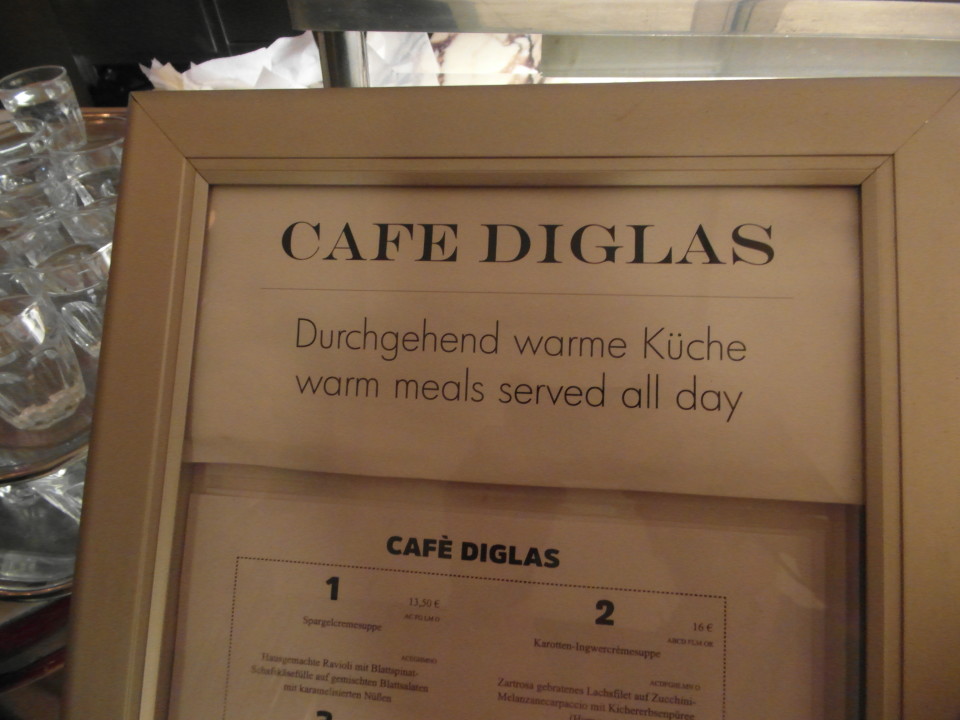 Cafe Diglas is located near the apartment where Mozart used to live, and which is now the Mozart Museum. And that makes it an interesting stop either before or after a visit to the Mozart apartment, or St. Stephen’s cathedral nearby.

Did we see all the traditional coffee houses in Vienna? Far from it. We could easily do another cafe hopping day and visit other fascinating traditional Viennese coffee houses such as Cafe Bellaria, Cafe Braunerhof, Cafe Hofburg, Cafe Pruckel, Cafe Residenz, Cafe Schmid Hansl, etc… There may not be 2,400 coffee houses left, but there are still enough to make you want to return to Vienna time and time again!