From Vienna to Italy to Buenos Aires … around the world, Wiener Schnitzel, Cotoletta alla Milanese or Coteletta a la Milanese is a very popular dish, beloved by those who enjoy traditional recipes which have been passed down from generation to generation. I can’t tell you which restaurants make the best version in the Italian or Spanish-speaking world, but I can tell you where to find the best Weiner Schnitzel in Vienna. Welcome to Figlmüller, where they have perfected the art of making crispy and deliciously satisfying Wiener Schnitzel for more than a century. 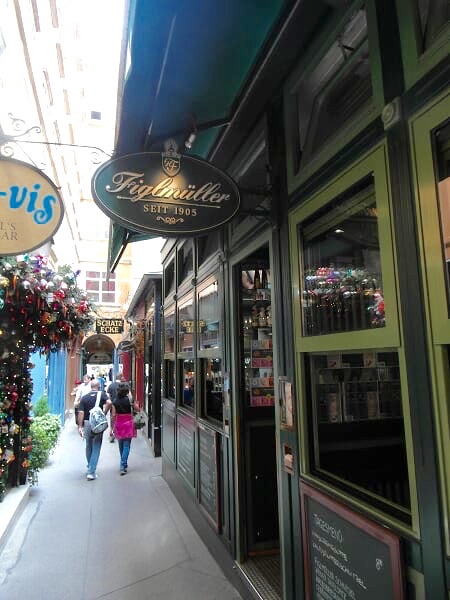 What is the Figlmüller secret to the perfectly cooked Wiener Schnitzel? After finishing most of my lunch platter … do note the “huge” size of the portion below … and enjoying every bite of the tender, succulent and delicious “Figlmüller schnitzel”, I decided I needed a visit to their kitchen to observe the cooking process firsthand in order to uncover the secret to Figlmüller success. 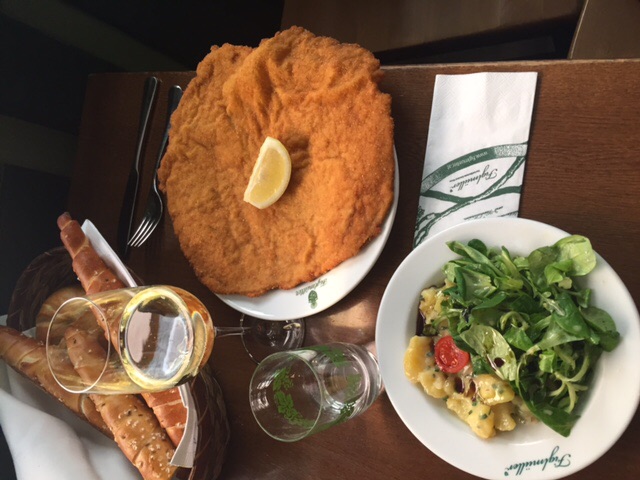 My first reaction was that the food produced in that very tiny galley kitchen was unbelievably awesome, totally out of proportion in quality to the size of the place where it was prepared. How was that possible? As I watched the kitchen staff in action, I saw that they have a highly efficient schnitzel system managed expertly by cooks who are well trained and totally dedicated to the art of schnitzel cooking. Plus, they use only the finest ingredients, from meat to breadcrumbs. Here is a summary of what I discovered as the essence of the art of Figlmuller schnitzel-making :

*Have all ingredients ready in advance and efficiently located, one beside another.
*Use only the tenderloin cut of pork which will neither curl or puff while being cooked. You can substitute chicken or veal for the pork.
*Cut the tenderloin into 250 gram (approximately 8 ounce) portions and pound each piece until the schnitzel is wafer thin. 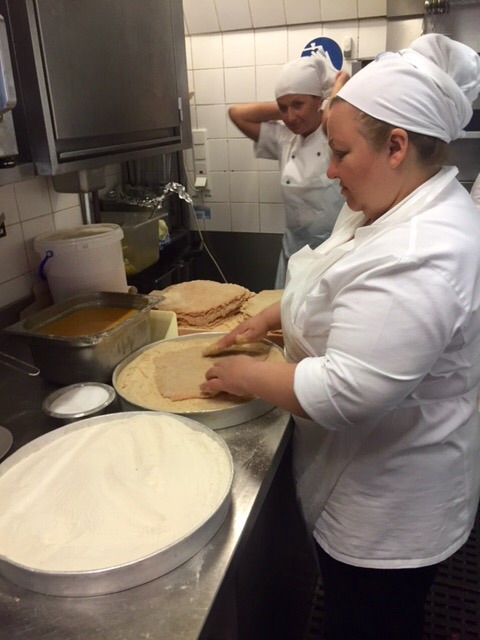 *Dip the schnitzel successively into flour, egg and a very special breadcrumb coating made from Austrian emperor rolls. These rolls are baked specially for Figlmuller and undoubtedly contribute to the superb crispiness of the the restaurant’s recipe.
*Shake off the excess breadcrumbs and put schnitzel into butter and oil simmering at a medium temperature, then move them into a saute pan with oil maintained at a slightly higher heat, and finally dip them quickly into boiling oil for a quick flash fry to crisp them up. Drain quickly and serve right away. Yes, it is the three pans of oil at three different precise temperatures along with the precision art of number of seconds of cooking per pan which contribute significantly to the Figlmuller difference. I’m sure of it! 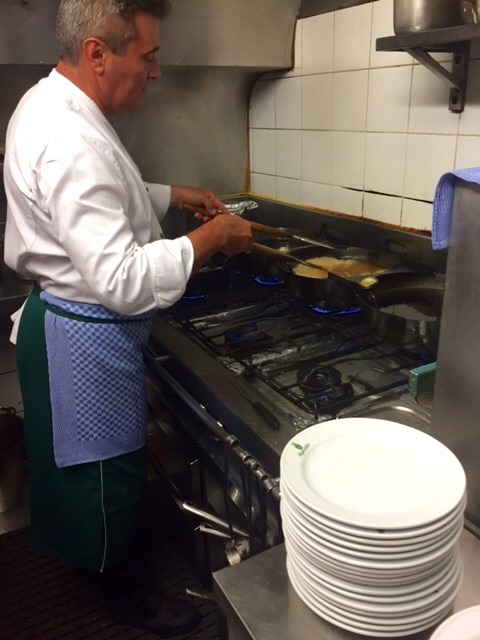 Enhancing the flavor of the schnitzel and balancing out the meal, Figlmuller serves its superb schnitzel accompanied by a green salad with a light vinaigrette and traditional German/Austrian-style potato salad. Our waiter suggested a dry Austrian Riesling which perfectly accompanied the meal. 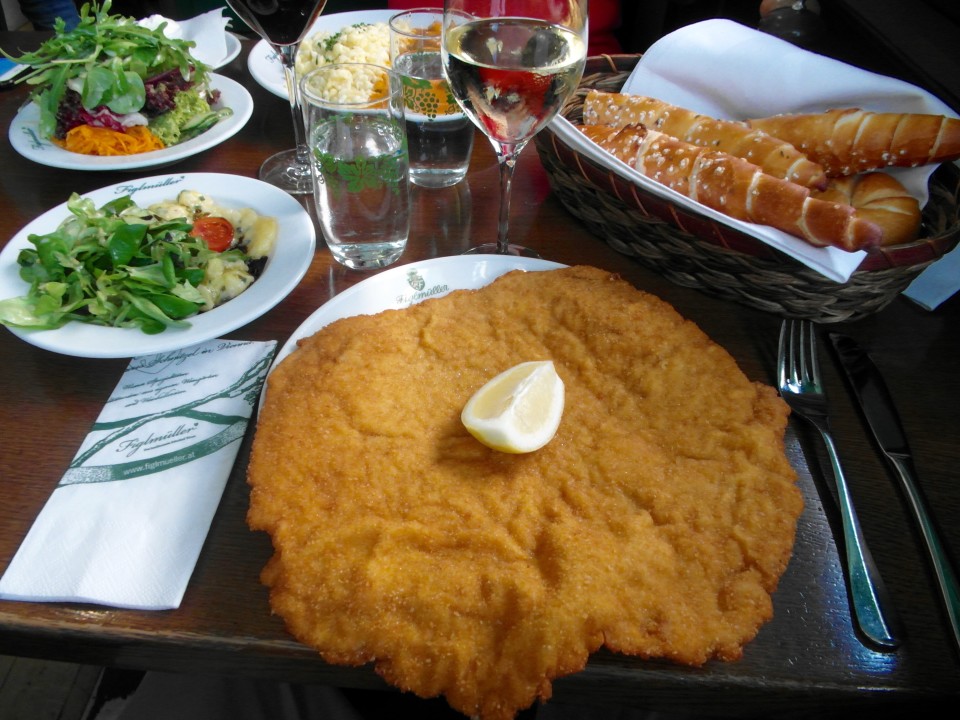 My husband savored his Veal Goulash, spätzle and sweet and sour braised red cabbage, accompanied by a Viennese Cabernet Franc, as much as I loved my schnitzel and Reisling. 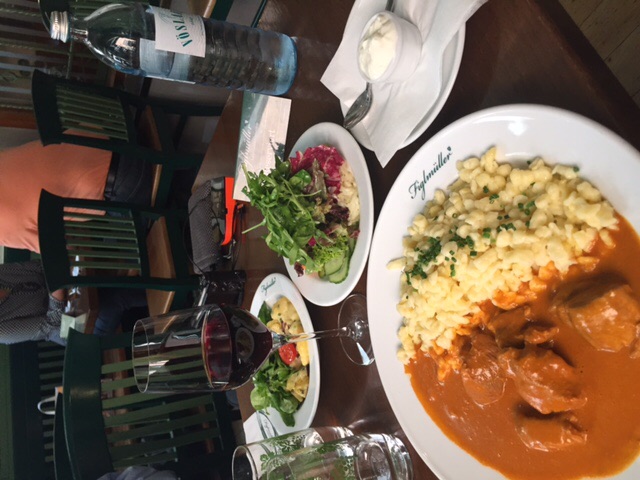 The quaint original Figlmüller, which was recommended to us by good friends who lived in Vienna for many years, is located at Wollzeile 5. Given its enormous success, the Figlmuller family has opened a second restaurant nearby. See http://www.figlmueller.at/en/about.html for more info. If you want an authentic traditional Viennese culinary experience, combined with excellent service and old warm charm, I recommend Figlmuller, for lunch or dinner, without hesitation. But — make sure to arrive hungry with a large appetite! 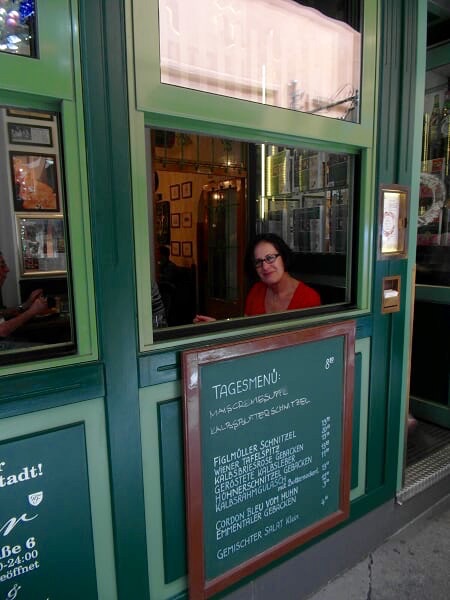