The name “African Queen” probably conjures up memories of the dynamic duo, Humphrey Bogart and Katharine Hepburn in the 1951 film by the same name — but forget that movie for now.  Close your eyes and imagine a restaurant with exotic decor … rosewood paneling, African motifs, lush tropical plants. 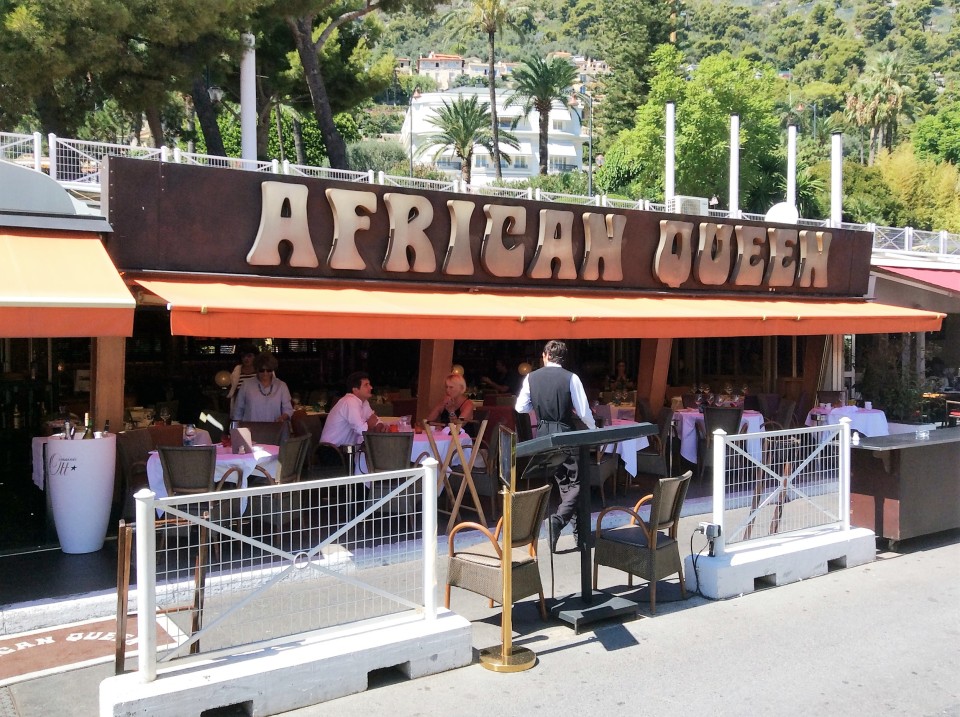 African Queen restaurant in the port of Beaulieu-sur-Mer

Large parts of the restaurant are open-air, reminiscent of an elegant dinner setting in the Serengeti.  Only in this case, it’s not the breezes from the African savanna blowing across your table but the breezes from the Mediterranean.  And the view does not include the occasional giraffe or dik-dik passing by, but a view of Le Port de Plaisance marina of Beaulieu-sur-Mer*, one of the chicest towns along the French Côte d’Azur .  So chic, that it is one of the main playgrounds for the rich and famous who have built glamorous estates and villas nearby on places like St. Jean Cap Ferrat, often touted as having the most expensive real estate in the world.  Not too surprisingly, your view from inside the African Queen restaurant will likely also include some fascinating people-watching. 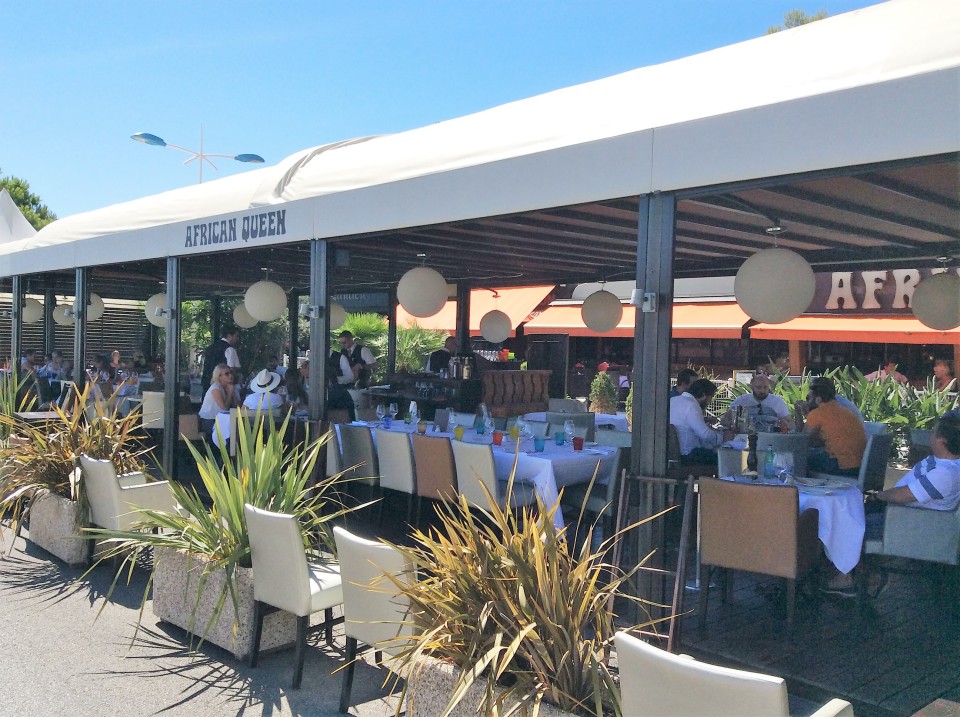 African Queen restaurant terrace in the port of Beaulieu-sur-Mer

But what about the pizza?  Close your eyes again, erase any memory you might have of “gourmet” pizza you have eaten.  Burrata mozzarella, fresh arugula, wild mushrooms, caramelized onions simply don’t cut it in a restaurant on the Côte d’Azur known for catering to the rich and famous.  Now with a clean palette, imagine that you are inside the African Queen being served a simple elegant white pizza cooked, of course, in a wood-burning oven and then brought to its full glory with shavings of white truffle at the table. 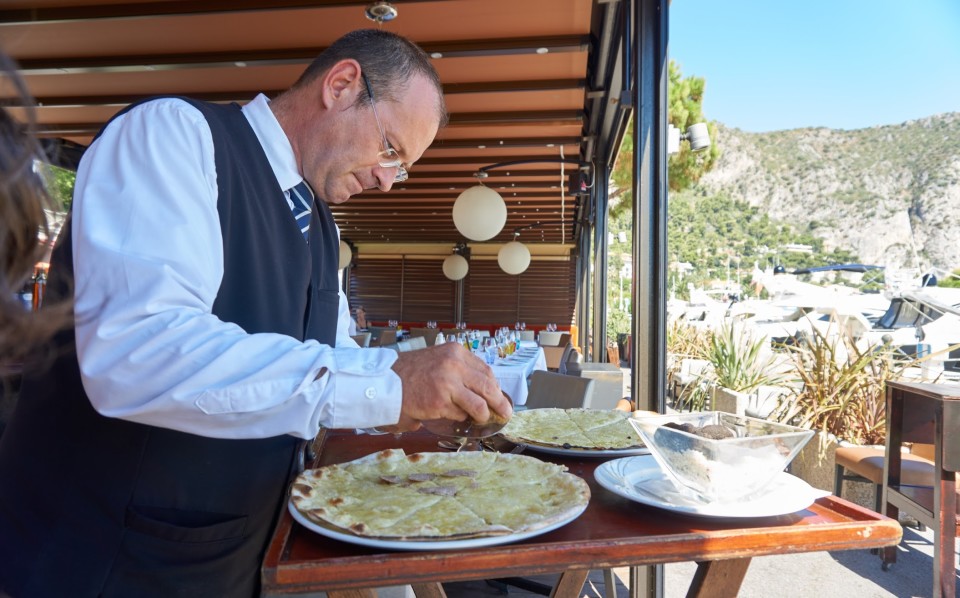 You are surprised to see so many shavings of such a rare tuber on your pizza. 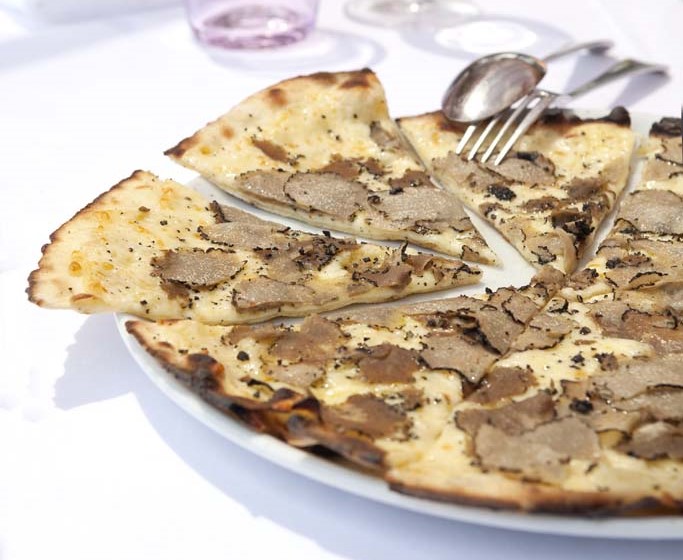 You smell the aroma, which began to infuse the atmosphere as the waiter shaved the white truffle over the pizza, and as you bring the pizza to your mouth your nose is flooded with the pleasing aroma.  You take your first bite, and you know right away that this is heaven.  Back to earth — you forget the exorbitant price of the pizza.  It is definitely worth every Euro you are spending! 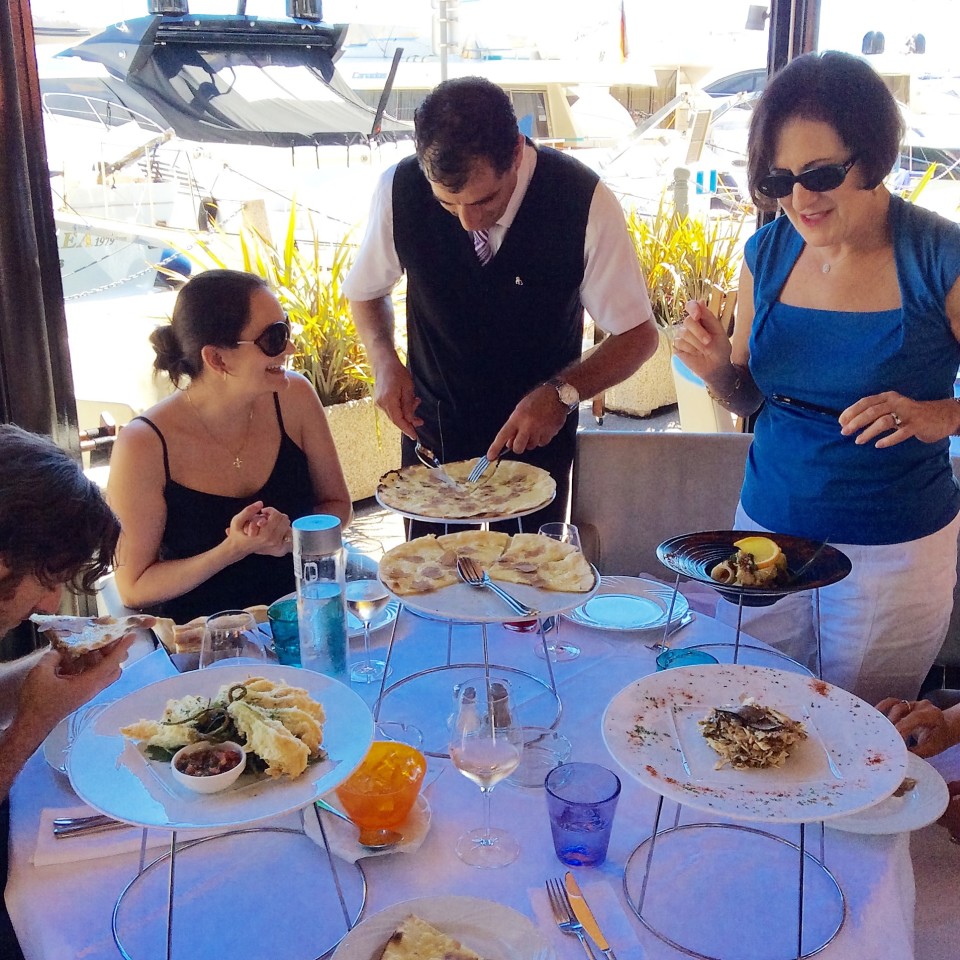 The rest of our midday meal was pretty close to heaven as well. 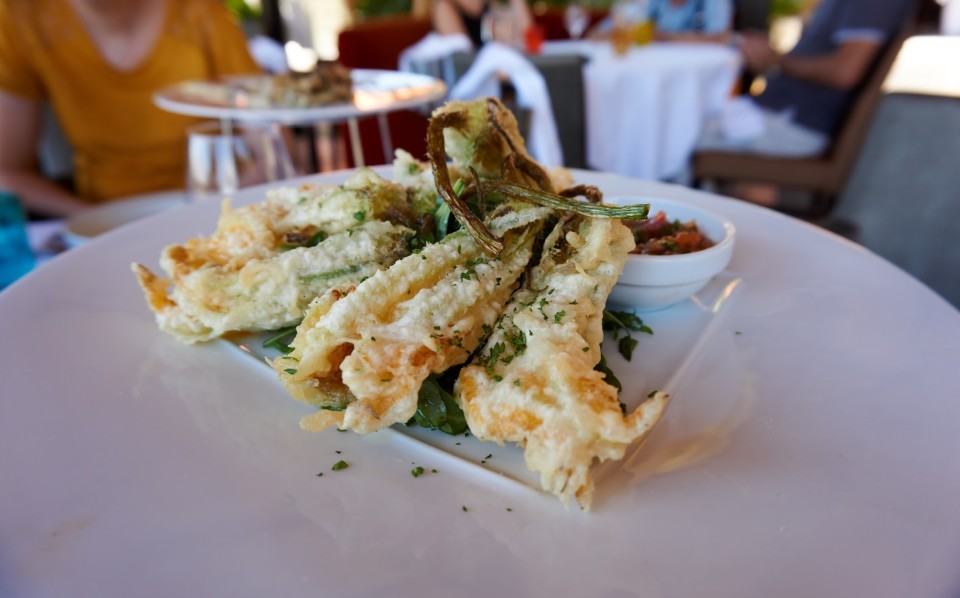 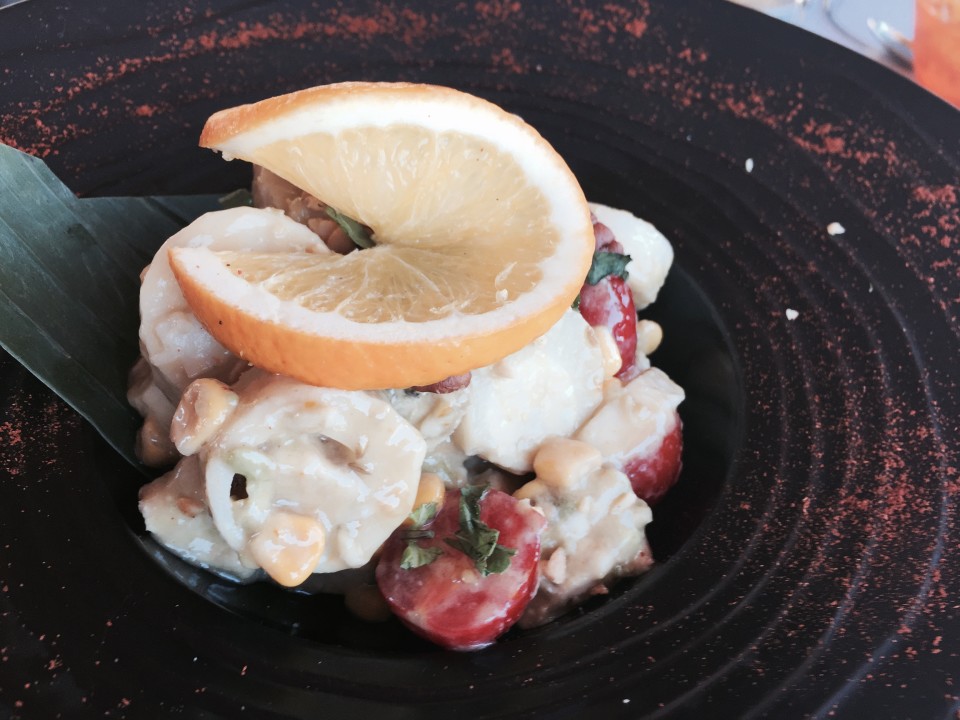 And the main course-size salads were equally impressive.  The African Queen’s classic “Salade Africaine” of hearts of palm, avocado, pecan nuts, chicken, corn, peanuts and fresh mint was bursting with color and flavor, while the seasonal Salad of local Purple Artichokes with a truffle Vinaigrette and shavings of black truffles and parmesan cheese was the perfect accompaniment to the pizza. 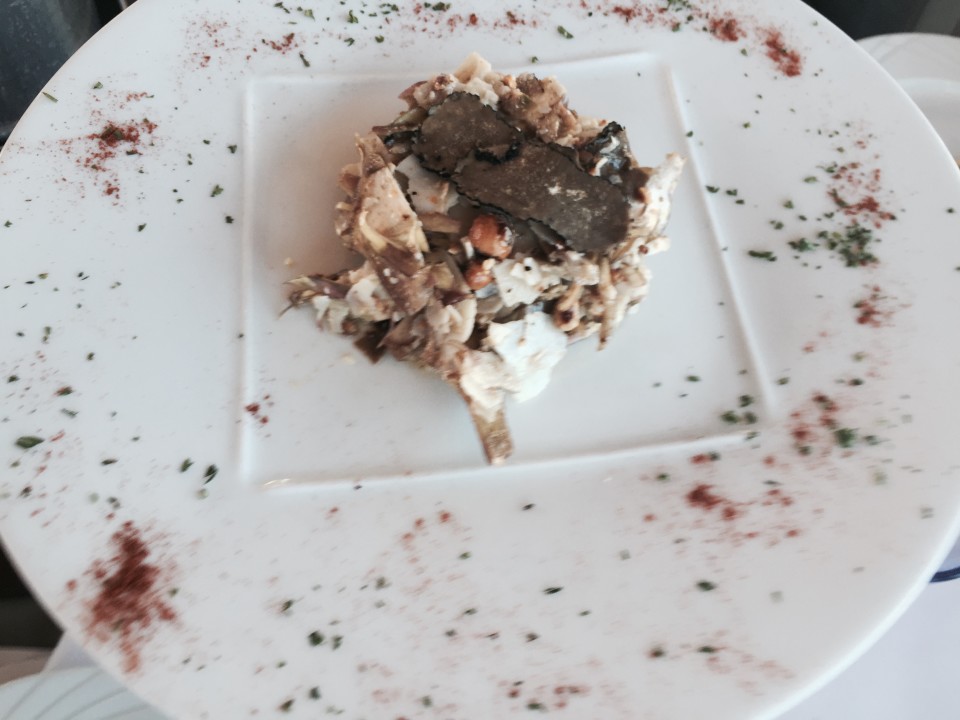 The African Queen is also renowned for its fresh local seafood, but it is definitely on our radar screen for the superlative taste experience of its Pizza Blanche à la Truffe.  However, perhaps you are wondering why “pizza with truffles” — which sounds Italian — is on the menu of a “seafood” restaurant in France named “The African Queen”.  Aaah, yes, this may seem like a bit of an anomaly but the history of the region provides an explanation for the “Italian” influence.  The southeastern region of France up to the border of current-day Italy actually belonged to the Italian States of Savoy and Genoa during the first part of the 19th century.  Although the process of Italian unification began in 1861, the borders were fluid and many Italians continued well into the 20th century to settle in this region which officially became part of France in 1860.  So the charming influence of the Italians still strongly permeates the culinary traditions and lifestyle of the present-day Côte d’Azur.  Et voilà… pizza with truffles at the legendary African Queen.

On your next trip to France’s fabulous Côte d’Azur, forget any comments about surly waiters … our service was superb! — and head over to The African Queen to create your own memories as you savor the restaurant’s heavenly Pizza Blanche à la Truffe.  And why not try some of their local seafood dishes as well?  Pourquoi pas?

*Postscript:  The town of Beaulieu-sur-Mer was the inspiration for the mythical town of “Beaumont-sur-Mer” featured in the 1988 film Dirty Rotten Scoundrels starring another indomitable duo — Michael Caine and Steve Martin.  Much of the film was also shot in Beaulieu-sur-Mer and the environs including the Villa Ephrussi de Rothschild which we visited … for the second time … prior to arriving at The African Queen.