According to Forbes and other sources, London has become the most visited city in the world.  If you are one of the many planning to travel there, let us recommend a charming boutique hotel which is reputed to be the essence of “Englishness” … discreet, personal, friendly, interesting, lavish, down-to-earth, brilliantly managed and with its own distinct personality … The Athenaeum Hotel and Apartments, London.  Nothing is too much trouble for the staff of The Athenaeum.  In the heart of elegant Mayfair, a prime location just around the corner from Buckingham Palace, The Athenaeum Hotel wants its guests to consider this property their “home away from home in London”.  And to that end, the staff is very welcoming and very well trained.
. 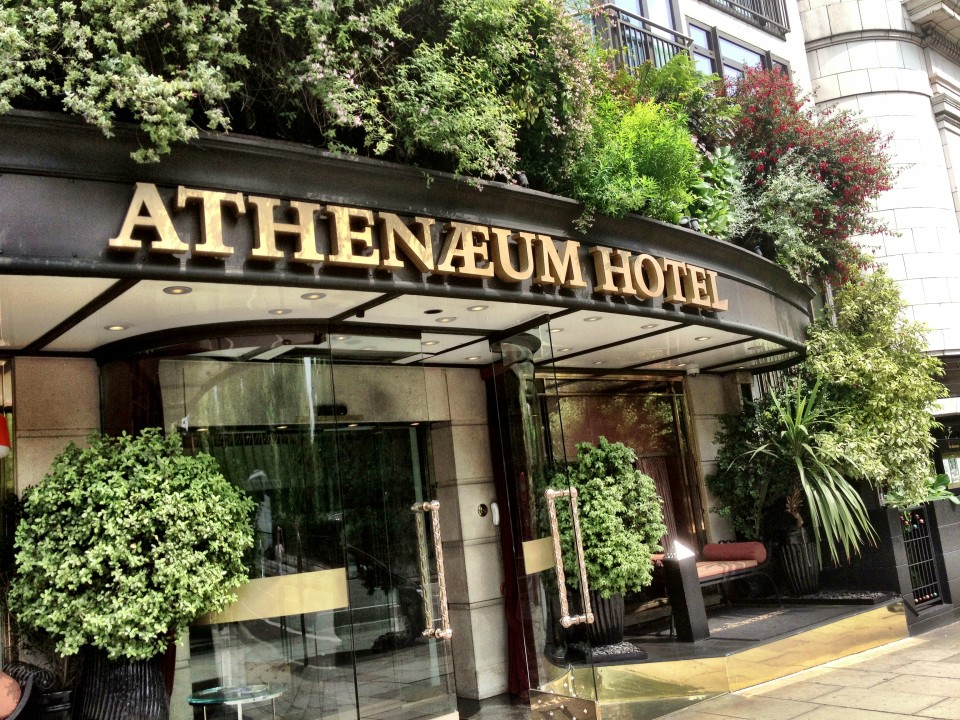 Starting with the welcome tea offered us upon arrival followed by the personal escort to our room right on up until our departure, we found service to be consistently friendly and top-notch. For example, breakfast arrived in our room every morning freshly cooked and on time.  And the doorman was always there for us — never did we need to wait more than a minute or two for a cab. The wi-fi service in the Athenaeum Hotel is not only complimentary but it works very well, so we did not need to use the Skyroam Global Hotspot that we usually rely on for internet service abroad (although we turned it on as soon as we left the hotel).
.

Warm smiling welcome awaits all at the Athenaeum Hotel in London, England

But these examples are just a glimpse into life at “your home away from home in London.”  The Athenaeum can cater graciously to your every need, whether you are there short-term on business or to kick off your travels around the U.K., or whether you have come for an extended stay, or are on your honeymoon or are traveling with young children.  This family-owned hotel has a wide range of updated and well-appointed accommodations from the awesome 3-bedroom, 2-1/2 bathroom Rooftop Penthouse Suite with glorious views overlooking the heart of London, to spacious and luxurious Suites which are well stocked with Tom and Jerry’s ice cream and offer an open-plan or separate sitting room design, to the bright and comfortable “Park View” rooms with floor-to-ceiling alcove views of Green Park.  One of London’s eight Royal Parks, Green Park sits adjacent to Buckingham Palace Gardens and hosts seven annual Royal Gun Salutes performed on its grounds throughout the year. So the very accommodating Athenaeum Hotel not only provides gorgeous views from its windows over Green Park, but it also serves up trail maps and bikes to its guests for their exercising pleasure inside the park and offers distant views of an occasional Royal Gun Salute.
. 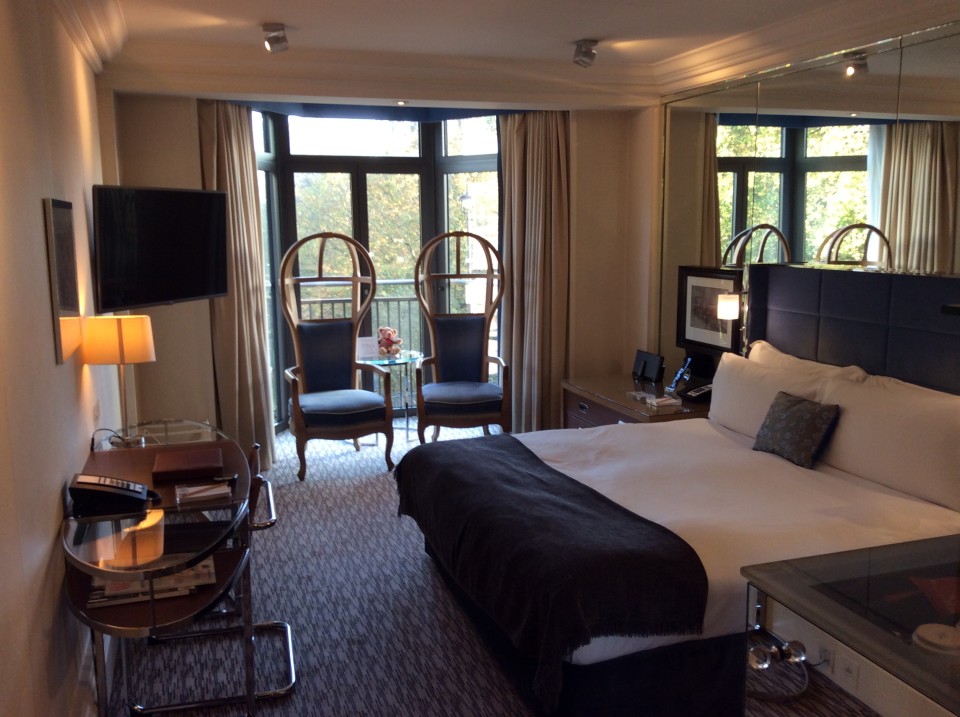 Park View room at the Athenaeum Hotel in London, England

In addition to five categories of suites and rooms, The Athenaeum has a unique offering of 18 fully-serviced luxury Apartments, each with its own front door onto Mayfair and discreet internal access into the hotel. Stay for as brief or long a visit as you like.  If you are bringing  your children with you, the “Kids” Concierge will get in touch with you to stock the apartment with their favorite foods, books and cds, and additionally for their eating pleasure, you can count on the hotel’s restaurant to have a nutritionally balanced menu designed by children for children.  The Athenaeum understands that happy kids are key to adult relaxation and enjoyment.
. 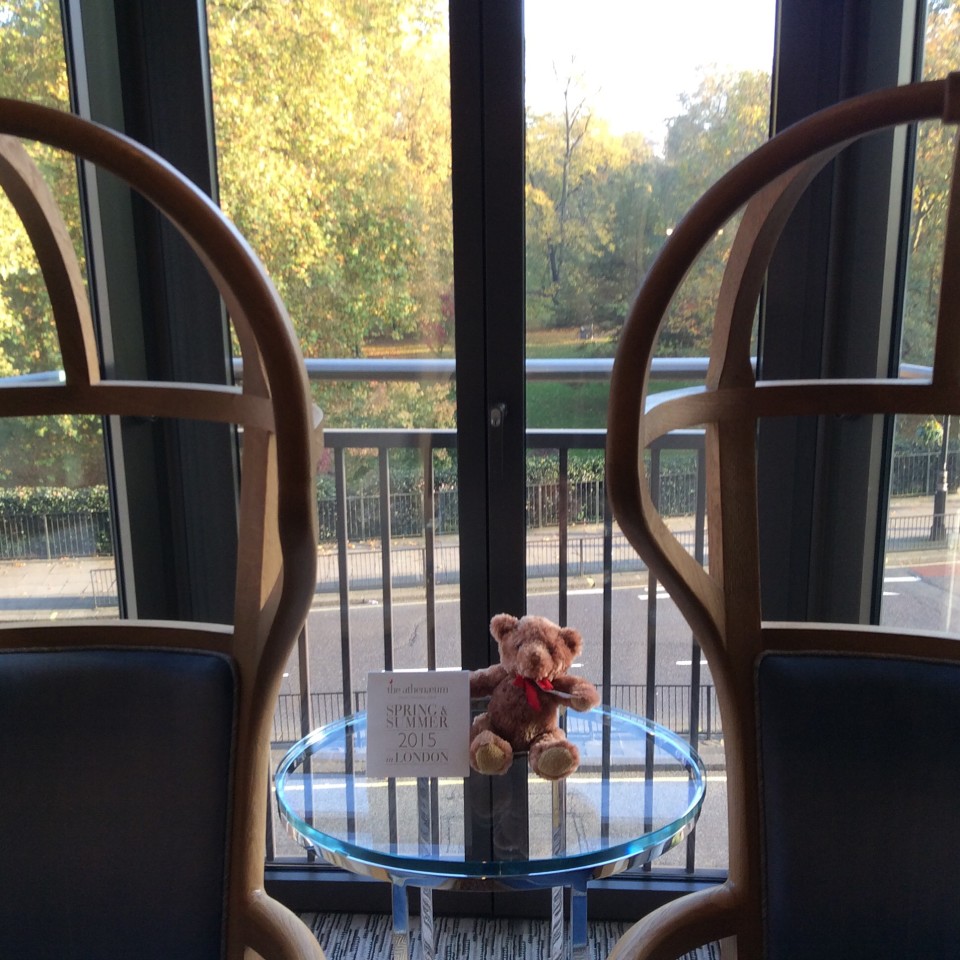 But don’t just think of these apartments as designed for families with children.  Not at all. The Athenaeum has had a diverse history which has attracted a wide range of interesting clients, including those who would relish the privacy offered by these very well-serviced and well-located apartments.
. 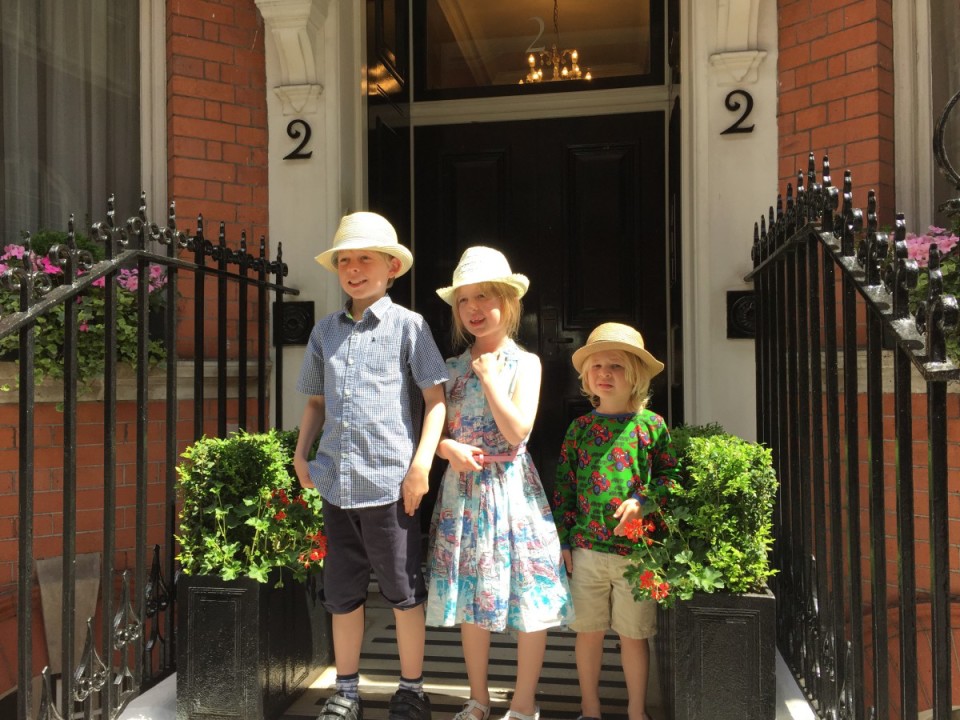 Front door of an apartment at the Athenaeum Hotel in London, England (photo globemousetravels.com)

In 1971, the hotel was purchased by the British entertainment conglomerate, The Rank Organisation, who encouraged the leading lights of the Hollywood entertainment industry to stay in these “private” apartments while filming in England.  Steven Spielberg is known to have installed an edit suite in his adjoining Athenaeum apartment to work on his films.  In addition, the hotel has had the pleasure of hosting Marlon Brando, Harrison Ford, Lauren Bacall, Liza Minnelli, Elizabeth Taylor and many others.  In fact, the relationship with the film industry continues to this day, so don’t be surprised if you meet up with a producer, director or actor in the lobby or elsewhere in the hotel.
. 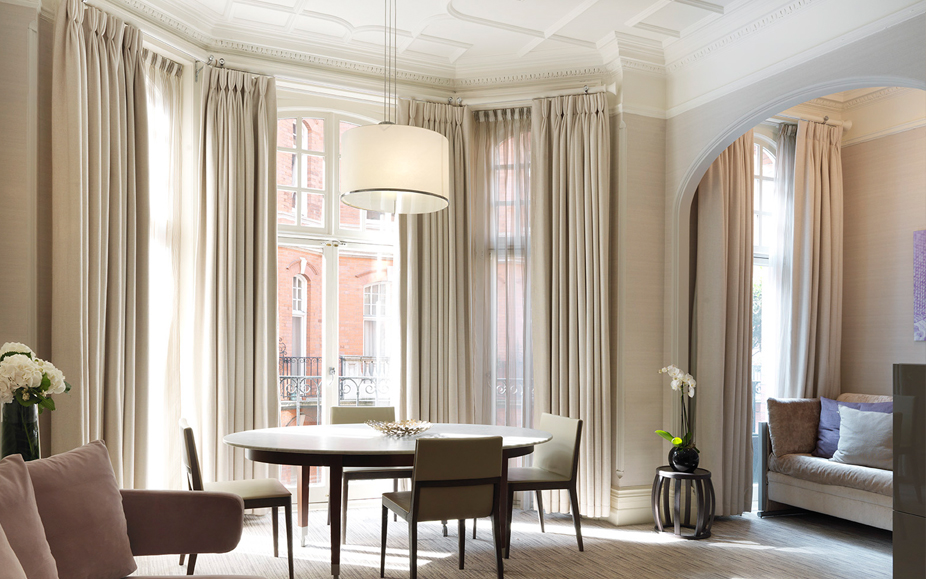 Dining area of an apartment at Athenaeum Hotel and Apartments in London, England

Besides hosting Hollywood celebrities and providing some of the friendliest service in London, The Athenaeum has a long tradition of haute cuisine, including breakfast, an award-winning afternoon tea, elegant and intimate fine dining, 24-hour room service, and a spectacular Whisky Bar featuring Ivo, one of only two Whisky Sommeliers in London, plus a unique whisky and cheese pairing!
. 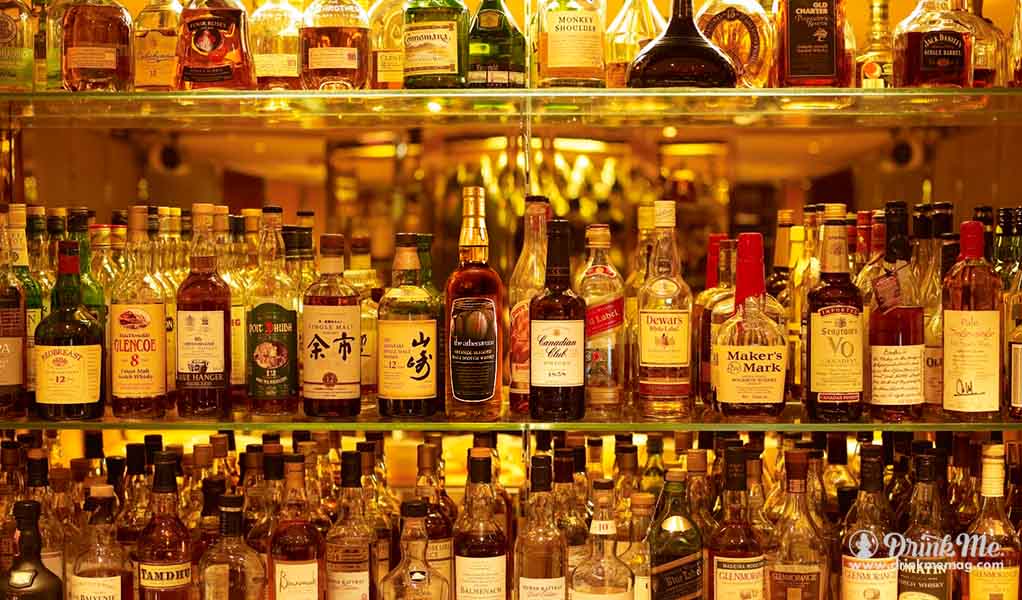 We enjoyed a delicious gourmet “Best of Britain” dinner  at the hotel’s award-winning dining room, with our food sourced from farm-fresh and local ingredients, complemented by an impressive wine selection.  With the restaurant’s motto “If you don’t see what you want on the menu, ask us and we’ll cook it for you”, what more could you ask?
. 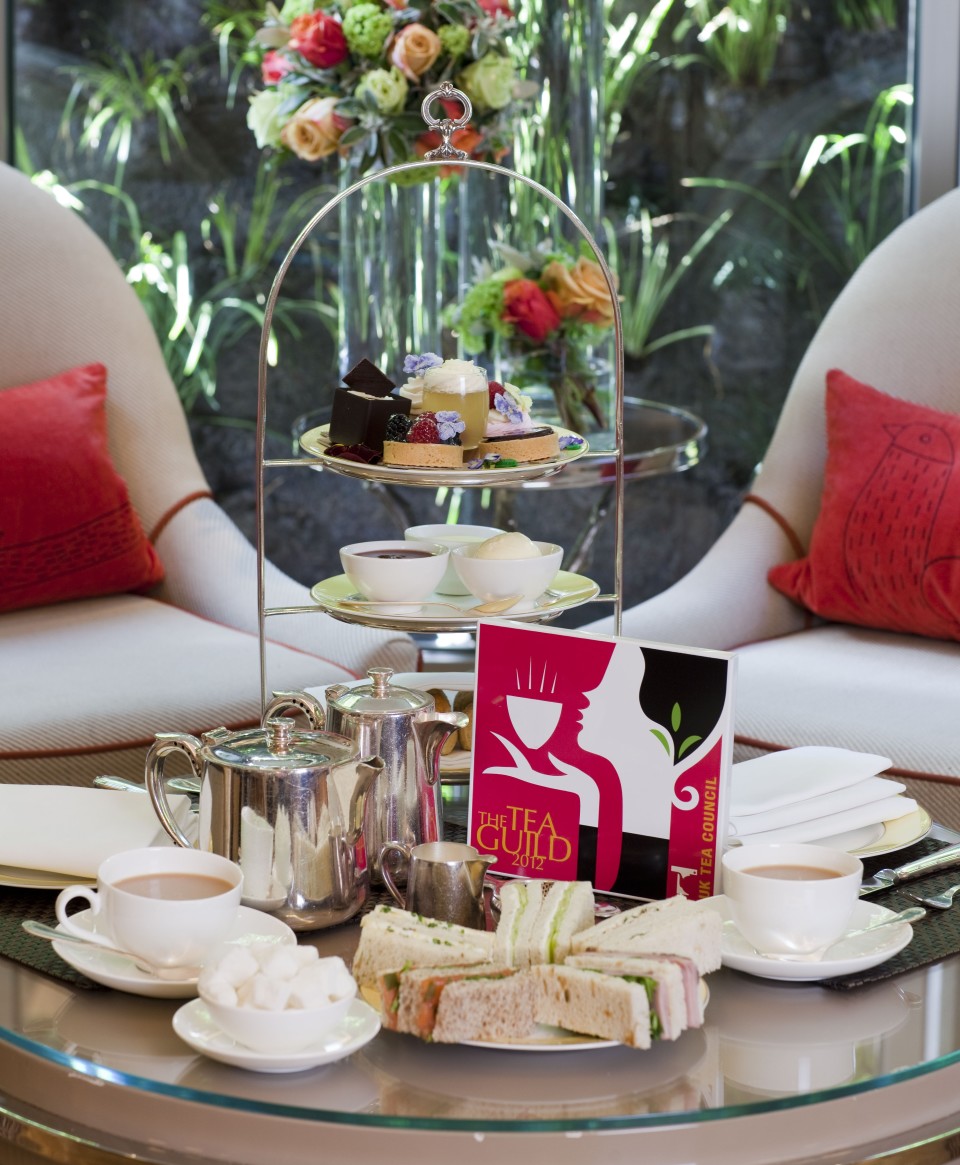 Breakfast daily in our room in the glass alcove overlooking the lush Green Park was truly the ideal way to begin the day. And oh how we missed that impeccably cooked breakfast and fabulous service once we returned home!  While the in-room dining selection is extensive, we feasted every morning on our favorite — the renowned “English breakfast”, with perfectly scrambled eggs in butter, home-made sausages, gammon (back bacon), sauteed tomatoes and mushrooms, hash browns and toast with farm-fresh butter and jam accompanied by fresh fruits and coffee or tea. The waiter brought our food promptly and was always careful to make sure that everything was prepared to our satisfaction.
. 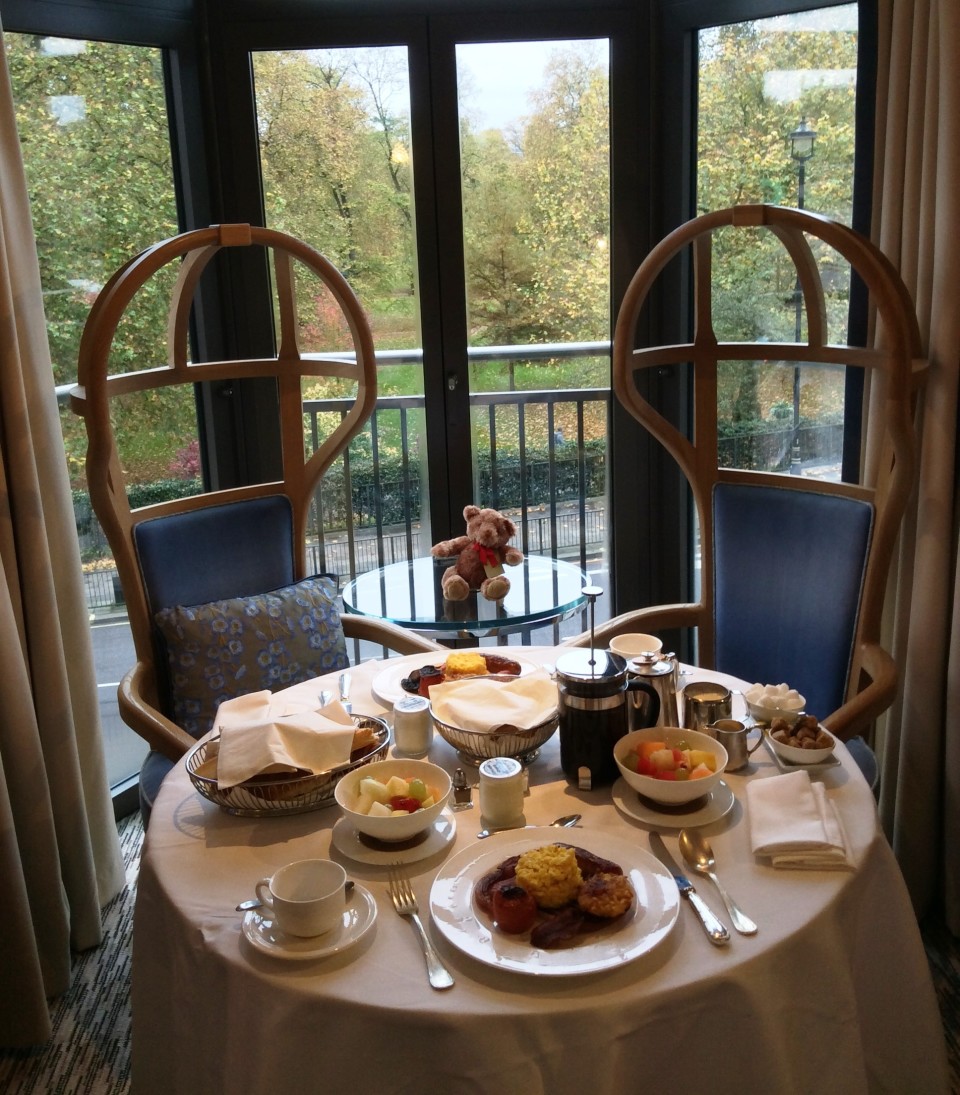 Finally, The Athenaeum is more than just a boutique luxury hotel.  Thanks to its rich history and the creativity of its management throughout the years, this hotel has developed a distinctive personality.  A guest can’t help but be a bit awestruck by the hotel’s Living Wall, a vertical garden on the northeast corner of the hotel featuring yucca, lavender, jasmine, fuschia, rosemary, junipers, mosses, and self-seeded wild flowers.  Designed and built in 2009 by award-winning artist and research scientist Patrick Blanc, this garden was “created to echo the fantastic open space of Green Park opposite the hotel … and to bring a fun, striking and intriguing design statement to the hotel for guests and Londoners to enjoy.”  Taking this notion of intrigue and fun one step further, The Living Wall features red bird boxes which provide valuable nesting sites for the city’s blackbirds, starlings, tits, and robins.  They also house little cameras to provide live video feed of the birds making their home at The Athenaeum year-round.  How unique is that?
. 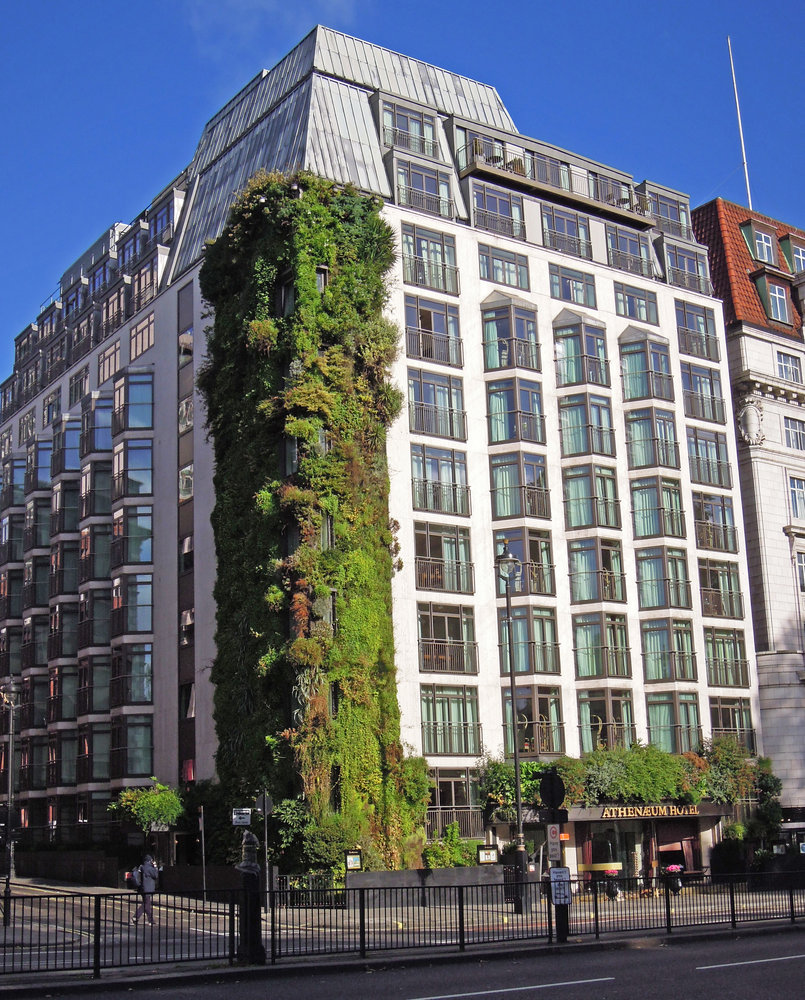 The Living Wall of the Athenaeum Hotel and Apartments in London, England

But there is more.  Open the drawer of the night-table by your bed and you will find a red hardback book entitled “Say Hello to Sally For Me” dedicated to Sally Bulloch, executive manager of The Athenaeum Hotel for more than 20 years.  A superb hostess and innovative manager with a dynamic personality, Sally was at home chatting with famous personalities from Sir Denis Thatcher to the Beatles and Joan Collins as well as many Hollywood celebrities. Sally is largely credited with transforming The Athenaeum Hotel into a magnet for personalities from the world of entertainment.   Moreover, Sally was well-known for teddy bear collecting .. so the Hotel’s mascot, “Arthur Neum” Teddy Bear, who will greet you at The “Athenaeum” reception desk, and then again in your room, is one of Sally’s many legacies. 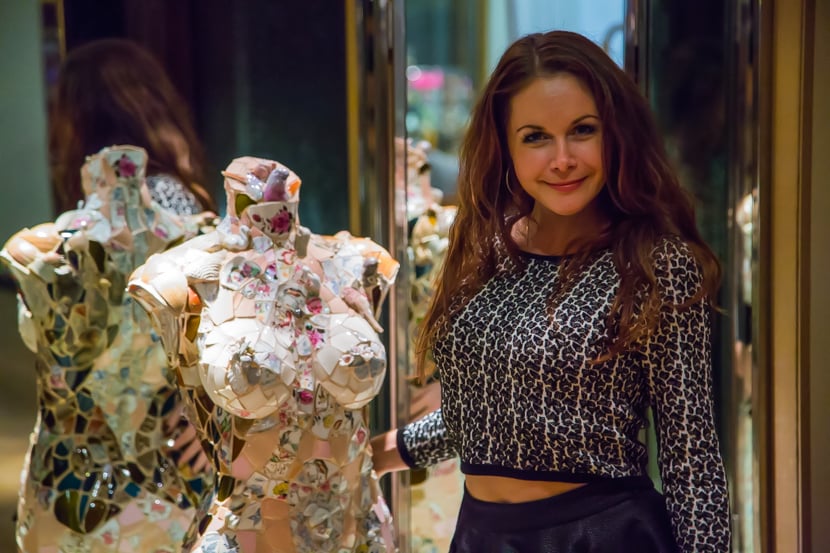 If the service, location, well-appointed and comfy rooms with fabulous floor-to-ceiling views or The Whisky Bar don’t excite you, then maybe The Living Wall or Arthur Neum will. Welcome to The Athenaeum Hotel, a hotel with a unique and fascinating personality. You will have to come visit to discover more yourself.

Stay tuned to BonVoyageurs.com for more Countries of the World as we share our joie de vivre from around the world. Luxury escapes, cruises and city breaks to Quebec City, New York, Washington, Buenos Aires. In Europe, places like Paris France, Nice France, Provence and the Cote d’Azur (French Riviera), Tuscany and Florence in Italy, Rome, Napoli and the Amalfi Coast. In Asia, countries like China, India, Nepal and so much more!
« Afternoon Tea at the Legendary Brown’s Hotel !
Pennsylvania 6 DC, heating up Washington’s restaurant scene! »