London these days is full of celebrity chefs striving to be as innovative as possible which makes the city’s culinary scene very eclectic and alive with buzz. But when it comes to Afternoon Tea, one of the United Kingdom’s finest culinary traditions and indeed, one of their finest contributions to the civilized world, I prefer to go where ​respect for ​”tradition” reigns along with quality of service and ingredients. ​The English Tea Room at​ Brown’s Hotel,​ the home of Queen Victoria’s favorite Afternoon Tea​, is my choice.​ ​ 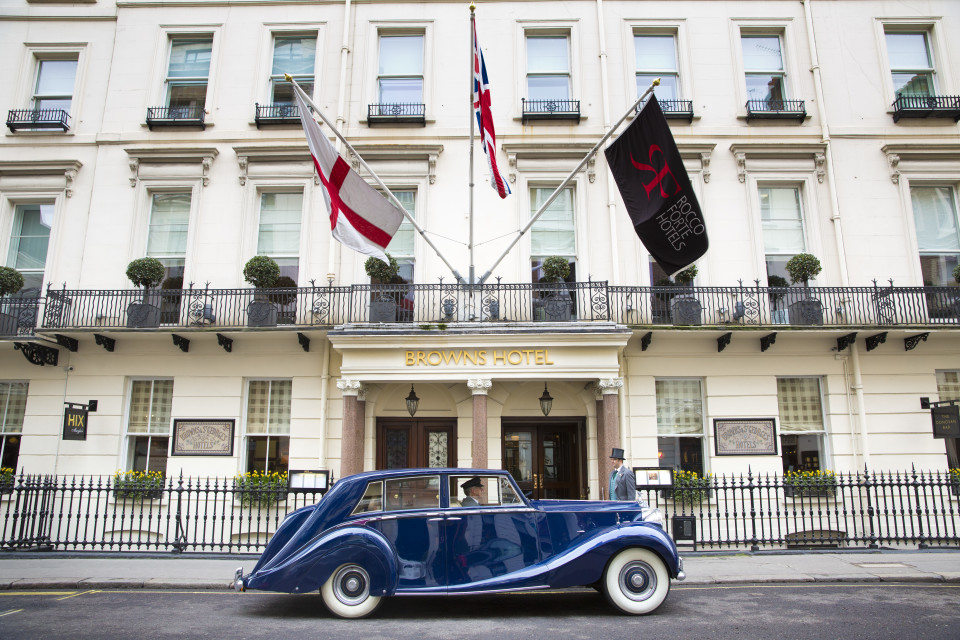 Why Brown’s Hotel? For a multitude of reasons​, beginning with the history of the hotel. ​A​ favorite haunt of many British writers​, from Sir Arthur Conan Doyle ​and Bram Stoker ​to Agatha Christie and Oscar Wilde, Brown’s has attracted many renowned personalities over the years ​since it opened its doors as London’s first hotel in 1837. Among them was Alexander Graham Bell who made the first ever telephone call from the hotel in 1876. 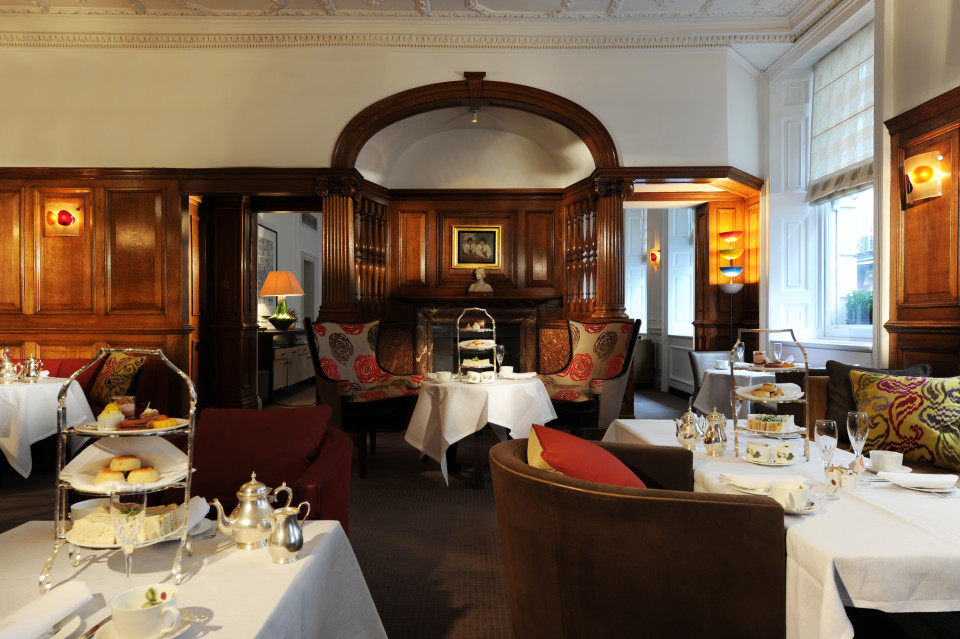 Thanks to Brown’s well preserved traditional Victorian elegance and sophistication — with major remodeling efforts​ having ​focus​ed​ on 21st century comfort and just the right touch of modernity — one can almost feel the presence ​of Brown’s legendary clientele ​hovering over the Hotel’s tea rooms these days. My husband and I had the distinct honor of being seated in President Franklin Roosevelt’s favorite armchairs by the fireplace, located strategically with a commanding view of the main rooms and in close proximity to the grand piano.​ ​Moreover, we were so excited to learn that this was the very room in which Rudyard Kipling spent so much time writing The Jungle Book. 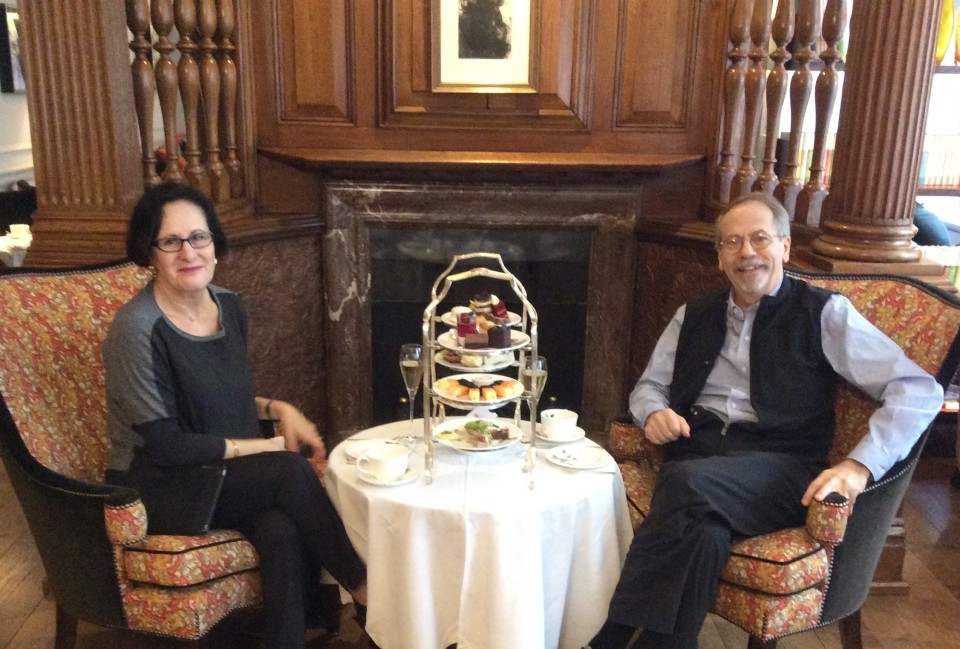 Afternoon Tea at The English Tea Room of Brown’s Hotel in London, England

​Aaah the piano … in a world where music often makes too bold a statement, at Brown’s a selection of the world’s most popular music, from Cole Porter to ​Henry Mancini to Andrew Lloyd Weber, is played by a very talented pianist who fulfills his role of providing ​the perfect​ ambiance ​of beautiful​ background music that allows ​guests to ​converse easily and intimately​ while savoring ​their​ ​Afternoon Tea and music.​ 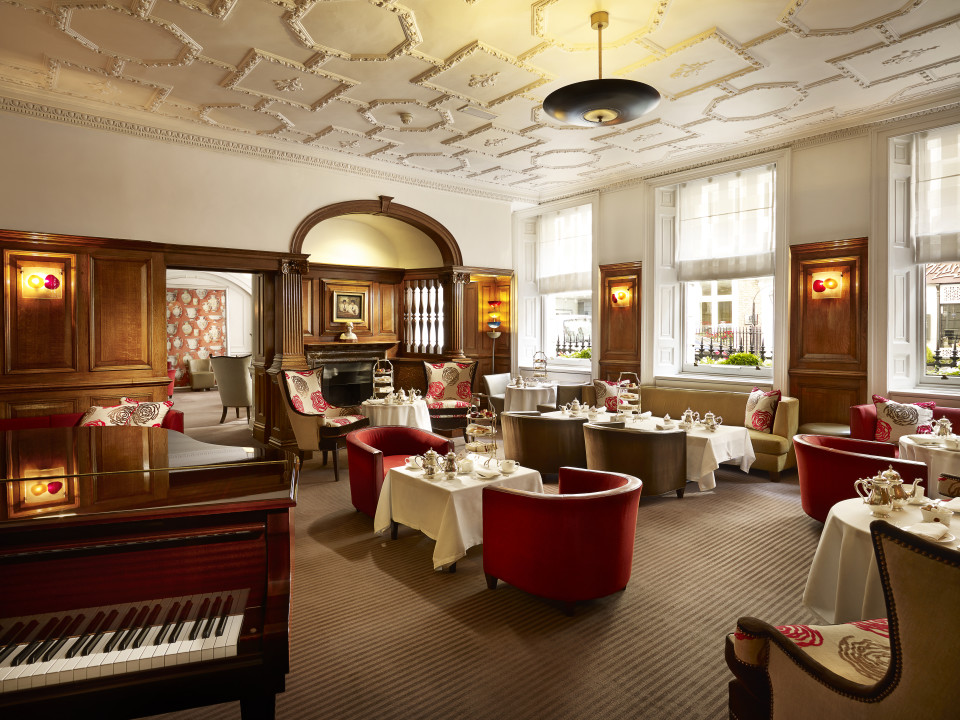 But we are here for more than conversation and entertainment. As we studied the menu of The English Tea Room, we were impressed by the range of selections offered. Did we want a “Traditional Afternoon Tea” or a “Tea-Tox’ Healthy Afternoon Tea” with significantly fewer calories thanks to innovative offerings? Or did we want a “Gluten-Free” Tea? And did we know that since we were at Brown’s on the weekend, that “Traditional Afternoon Tea” would be be brought to the next level with the accompaniment of Champagne, regular or rosé? 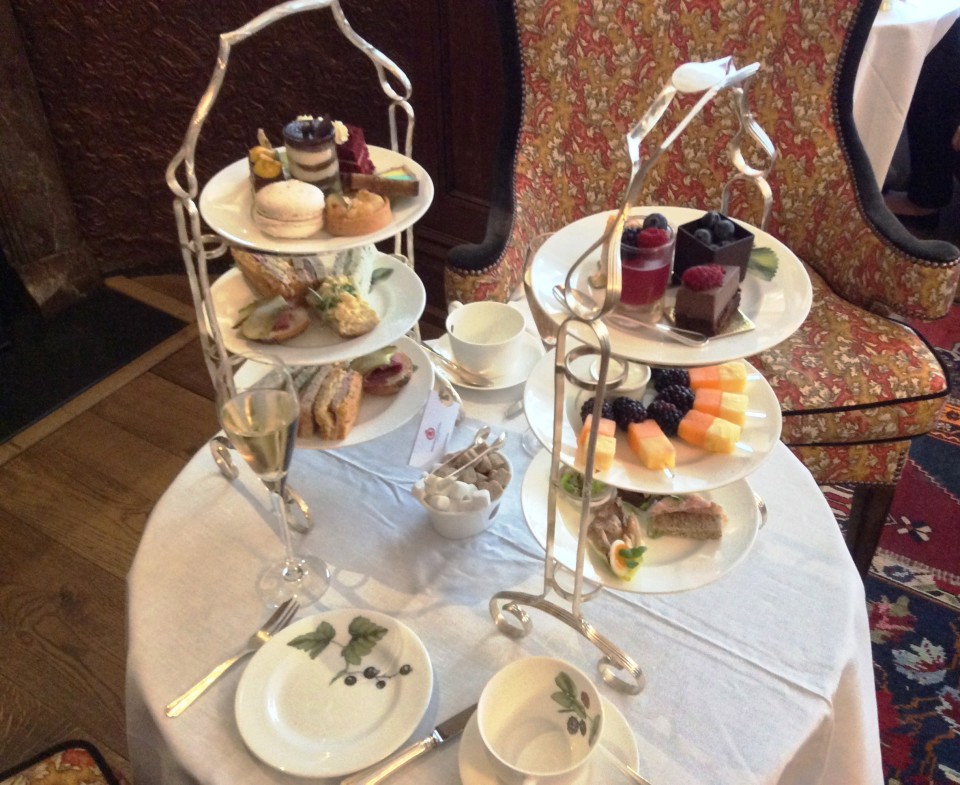 Afternoon Tea at the English Tea Room of Brown’s Hotel in London, England

​While we we studied the food options, The Tea Room’s Tea sommelier introduced us to Brown’s Seasonal Tea Library, monitored and curated by their tea traders, Lalani & Co London. We had met our first “tea sommelier”!​ Brown’s bills its “seasonal tea library” as “a collection of the world’s most exquisite teas from family-owned tea gardens” which as they come into season, “are selected for Brown’s Library, stored carefully and prepared to perfection.” Indeed, Brown’s has its own personal tea blended to be the perfect accompaniment to their savory sandwiches. It is this dedication to excellence which clearly puts Brown’s English Tea Room at the apex of London Tea Rooms.

So how was afternoon tea at The “legendary” English Tea Room in Brown’s Hotel? Awesome, my taste buds were happy, happier and happiest. I live with regret that I cannot find an afternoon tea on this side of the pond to begin to rival that which I enjoyed to the utmost at Brown’s. 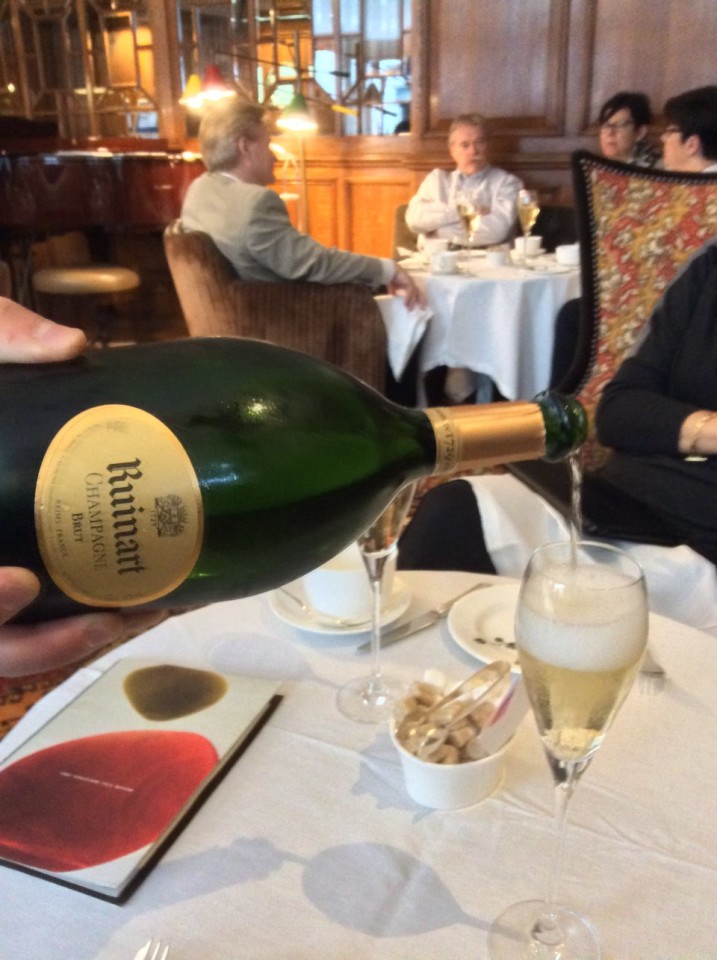 We started with a glass of Ruinart Champagne, a small French boutique champagne which Forbes calls “The best champagne you’ve never heard of” (Nov 12, 2014). France’s oldest producer of champagne, Ruinart was founded in 1729 and recently purchased by the French luxury conglomerate, LVMH, already well known for its Dom Pérignon, Moet & Chandon and Veuve Clicquot brands. So champagne connoisseurs — be on the look-out for Ruinart as Forbes predicts that we can expect a “discreet expansion” in the coming years. From my standpoint, I remain singularly impressed that I had the distinct pleasure of discovering this superb champagne in London — and not in Paris! 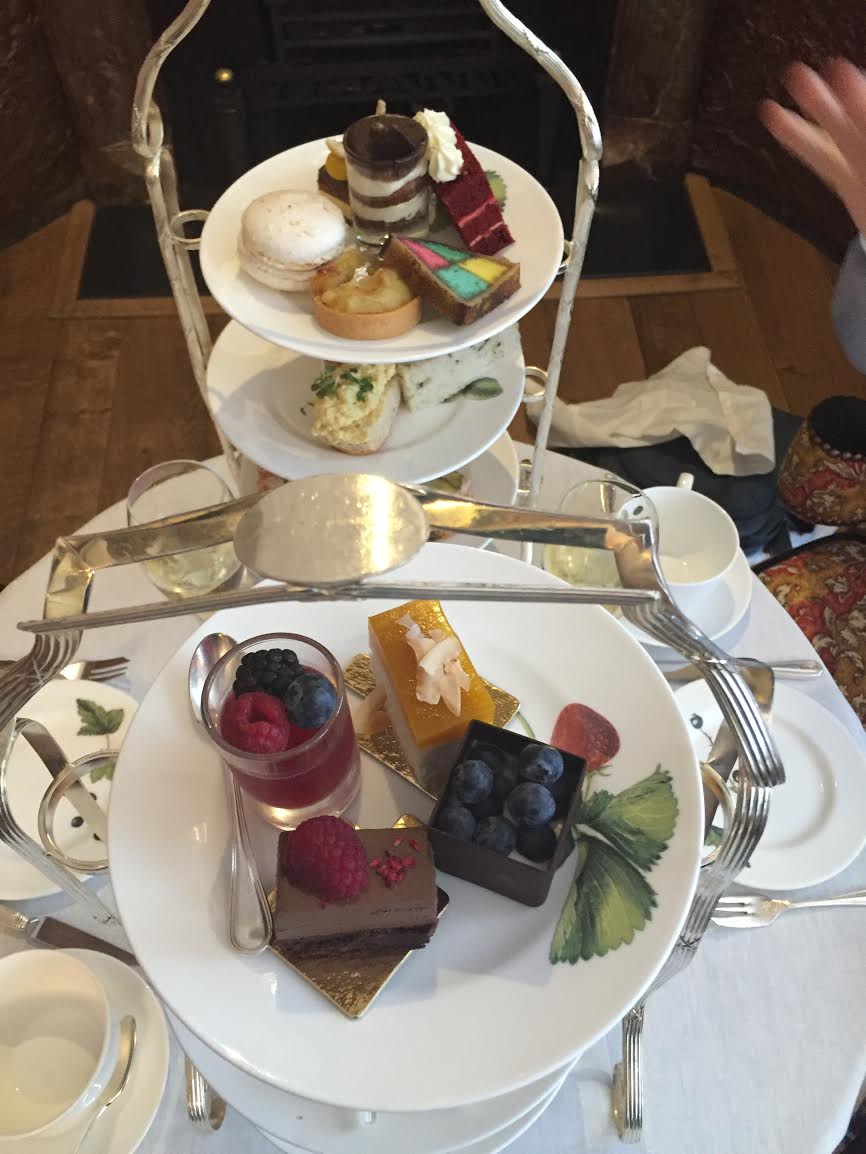 Afternoon Tea at the English Tea Room of Brown’s Hotel in London, England

As we finished sipping the champagne aperitif, the tea service began.  Intrigued by innovation but respectful of tradition, we ordered Brown’s “Tea-Tox’ Healthy Afternoon Tea” as well as a “Traditional” Afternoon Tea.  The former came with original offerings such as “smoked chicken and guacamole on spelt bread” and “chicory Leaf with Smoked Mackerel and a soft-boiled quail’s egg” while the latter was comprised of freshly cut tea sandwiches from my all-time favorite, “smoked salmon”, to “English country ham and cheese” and “egg salad” with plenty of watercress to go around.  We enjoyed the counterbalance of the light and healthy with the traditional, each prepared with top quality British ingredients.  Paired with Brown’s own personal tea blend, the first tier of our Afternoon Tea was truly superb.
. 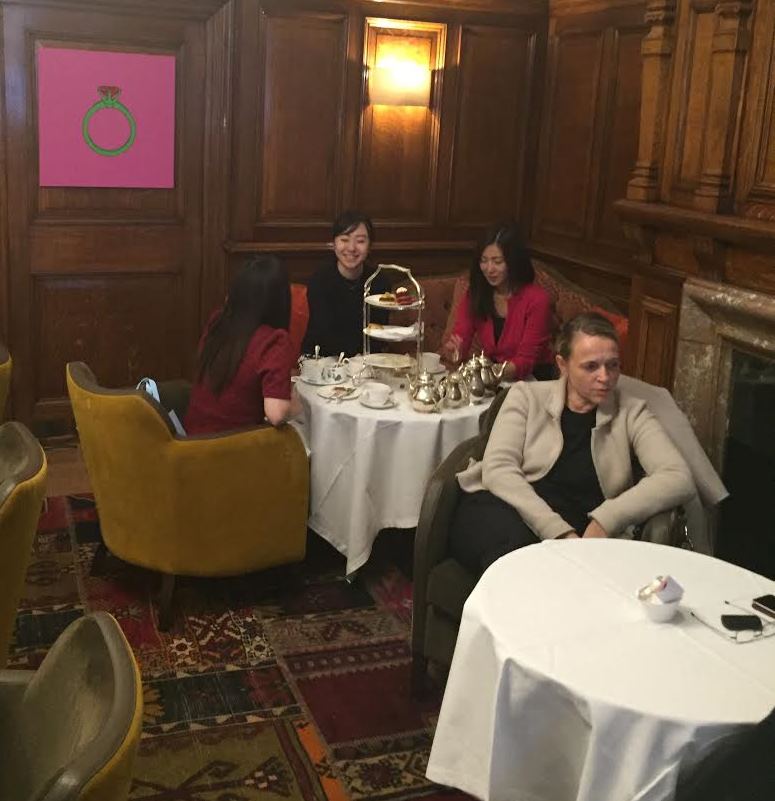 The second tier of the “Traditional” Tea was comprised of freshly baked fruit and plain scones served with clotted cream and strawberry preserves, perfectly paired with White Tea. Although we have lived in England and enjoyed many a delicious Afternoon Tea in fine restaurants and country inns as we traveled the country, we have never had scones, clotted cream and preserves that we have enjoyed more.  In fact, the cream and preserves were so thick, rich and divine, that instead of putting a polite dab of each on my scone as I usually do, I slathered on the creamy and fruity calories and savored every bite.  And then there were the many original offerings from the “Tea-Tox'” tray.  I couldn’t resist trying the  chocolate-raspberry soya slice made with “Valrhona” Xocoline (sugar free chocolate), dark chocolate cream and layered with a gluten free sponge cake.  Of course, to feel good about my selections, I also felt compelled to enjoy the fruit kebabs with a honey-yogurt dip along with the seasonal fruit sorbet.
.
When the third tier arrived, I wished I had run a marathon that morning, but I dove in anyway.  “Traditional” assorted pastries and Tea-Tox'” offerings — my favorite was the dark chocolate tulip filled with crème fraîche and blueberries — were delightfully complemented with the very delicate Silver Needle and Rosebuds Blend Tea.
. 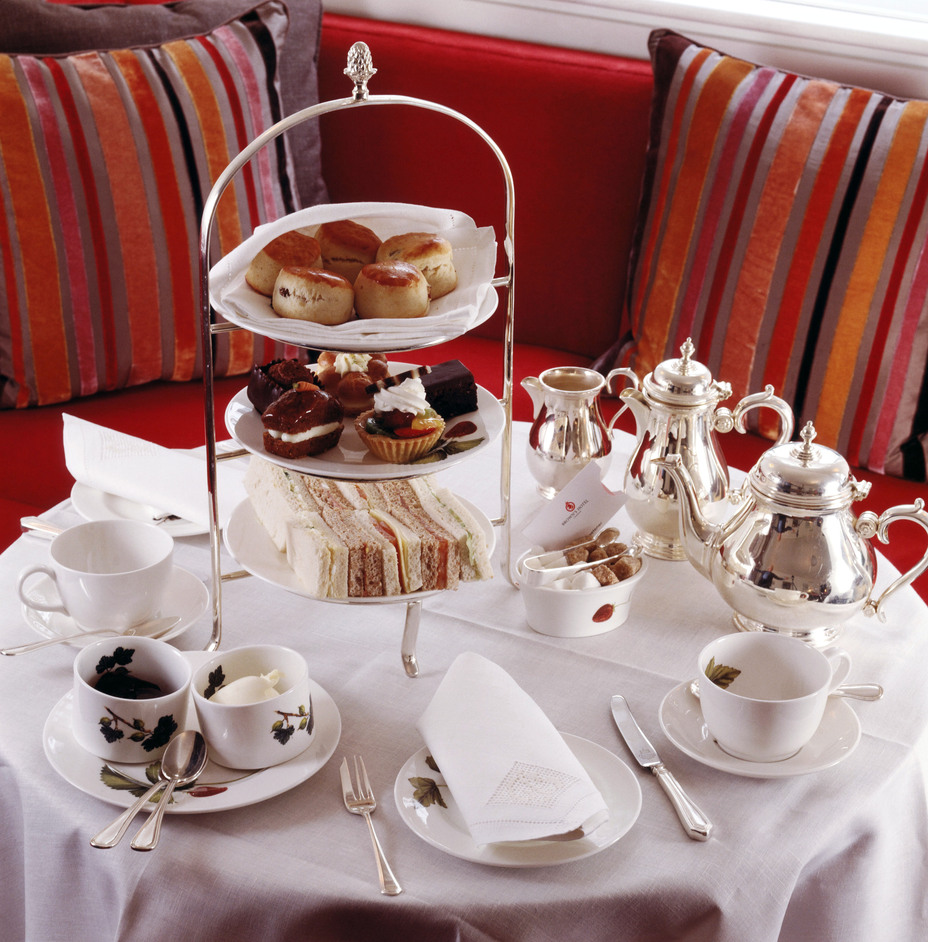 By now you might think that we would be well sated and that Afternoon Tea was complete … but you would be wrong … at least on the second count.  The 3-tiered trays are not all there is to a Brown’s Afternoon Tea.  Not only will your server offer you seconds, and indeed thirds, of anything your heart desires, but after you consume all the miniature offerings of sweet treats on the trays, your server will pull around a trolley replete with assorted cakes.  “Which cakes would you like to try, Madam?” is a marathon request, but you only live once, so it goes without saying that we continued the feast with cake and more of the delicate Needle and Rosebuds Blend Tea.
.
What else does Brown’s do to enhance your Afternoon Tea experience?  Their service is impeccable, their sommelier always there to bring a fresh pot of tea or respond to any new selection you may want to try, the music a perfect complement, the decor and ambiance just what is needed to respect the history of the establishment.  But there are a few more compelling elements at Brown’s …
. 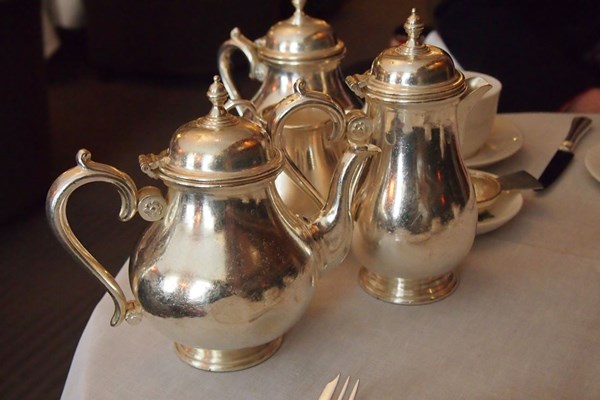 ​The teapots used for their tea library were designed by British ceramic artist ​Billy Lloyd, in cooperation with with Lalani & Co.  Each piece was handmade in London by Billy himself, with the size and shape designed to perfectly infuse teas of the quality offered by Browns.  ​And to keep the memory of your most elegant and enjoyable experience alive, Brown’s sends you off with a gift of tea leaves from England’s first ever tea cultivator. A consumable memento and a perfect ending to the perfect Afternoon Tea.​
.
​ Not too surprisingly, Brown’s Hotel and The English Tea Room have won many accolades over the years.  Indeed, finding a Tea Room richer in history and renowned clientele would likely be an impossible challenge.  So when you are next in London, the city which now ranks as the #1 destination in the world for savvy travelers, savor one of the world’s finest traditions … Afternoon Tea, with champagne if you come on the weekend, at the extraordinary, legendary English Tea Room at London’s historical Brown’s Hotel!
. 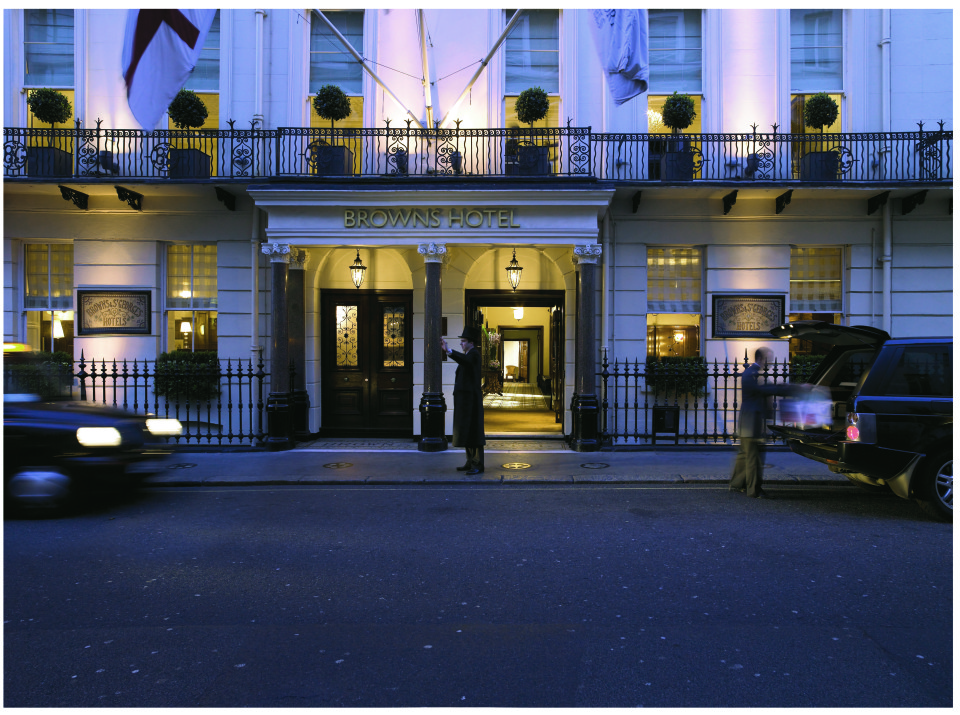