The Israeli breakfast best in the world? I expected to be enthused by the Israeli culinary scene, but I never expected to be excited by “breakfast”.  I’ve never been a breakfast person … not until I arrived in Israel. Unlike my husband, I have never woken up eager to run into the shower and head down to the hotel dining room to enjoy my breakfast.  But I know that travel which involves touring from early morning to late into the evening requires a substantial breakfast before setting out for the day. 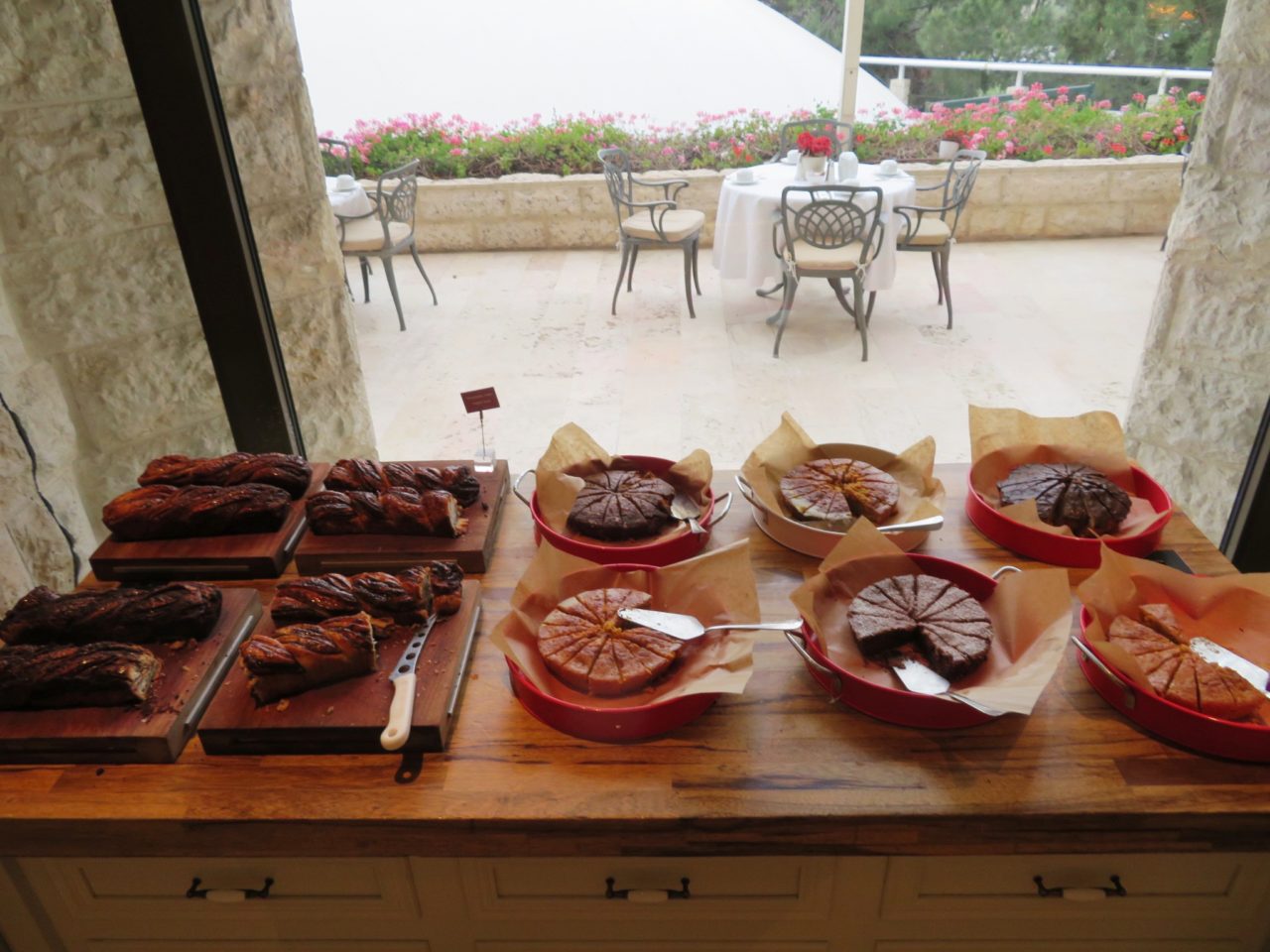 Our recent trip to Israel, however, was transformative.  The very first morning, I was awestruck by the magnificent and wide variety of choices – – healthy and fresh choices – offered up at the breakfast buffet in the restaurant of our hotel, the Dan Tel Aviv Hotel.  It took just that one morning to provide me with that special ah-hah moment.  I had become a “breakfast person” too.   Indeed, all of the other large hotels we stayed in during our two-week tour of Israel, including the Inbal Jerusalem Hotel, the David Intercontinental Hotel in Tel Aviv, the Scots Hotel in Tiberias, all provided breakfasts that tantalized my taste buds and gave me the energy to enjoy a busy day of touring without weighing me down.

Of course I’ve had “healthy” breakfasts before.  I’ve enjoyed light and flavorful Japanese and Chinese breakfasts, and tried smoothies.  With the concept of “healthy” out of the equation — I’ve eaten many a marvelous traditional English breakfast renowned for its farm fresh eggs cooked with butter, gammon bacon, home-made sausage, grilled tomato and mushrooms, and fried bread.  And of course, many a time I’ve savored freshly baked croissants and café au lait in France.   But for me to have the feeling of sheer enjoyment in the morning and get-up-and-go energy after eating, top of the list and far above the others is an Israeli breakfast. 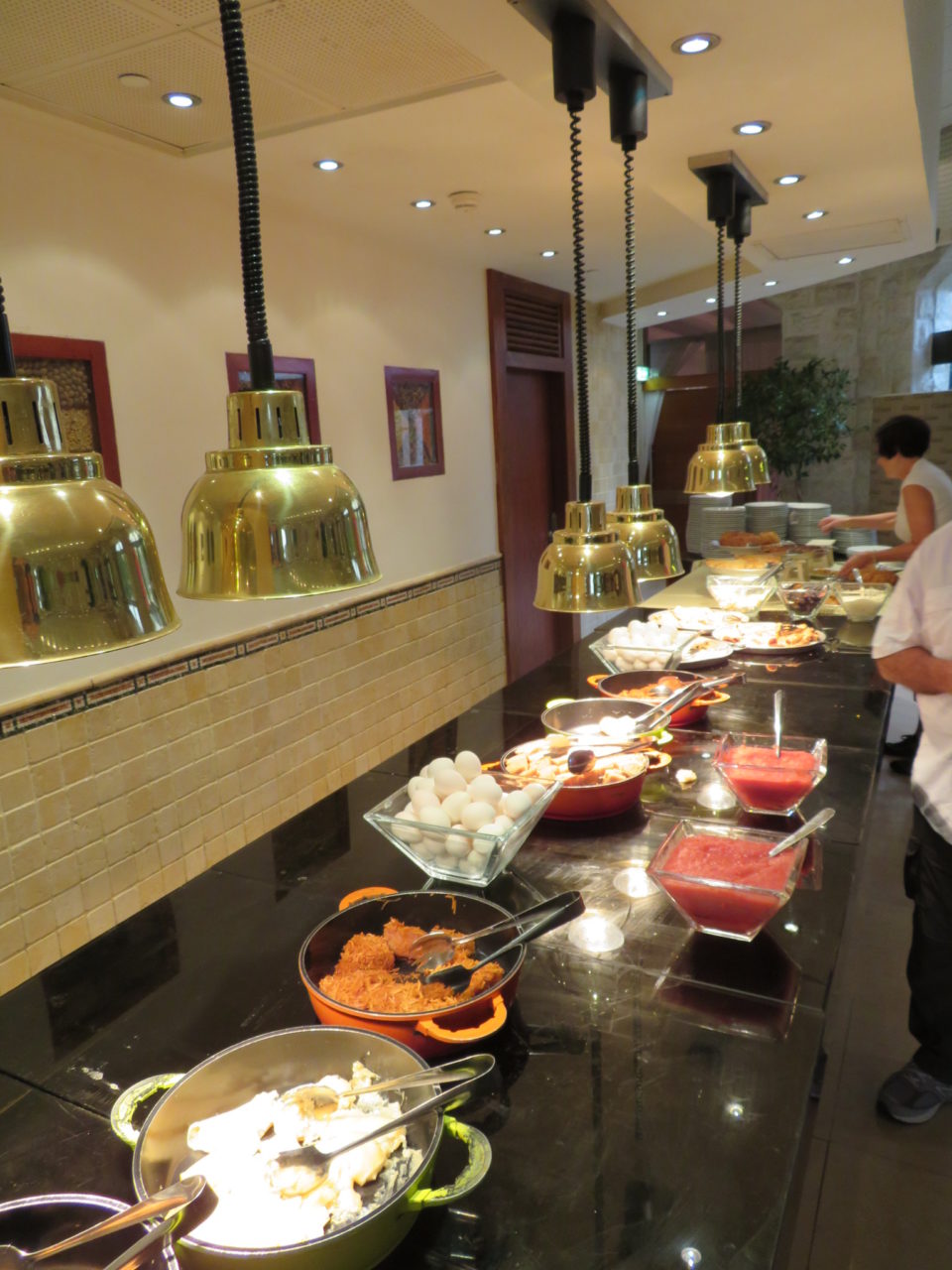 So what is so special about an “Israeli” breakfast?  First of all, in the larger hotels it’s traditionally served buffet-style which allows me to do a walk-about to check out all the offerings before selecting what I want.  Plus I love buffets because they light up my senses, allowing me to see, smell and even taste foods before I actually pile them onto my plate. And I simply enjoy watching the chefs and cooks at the made-to-order stations perform their artistry as they prepare individual orders.

Secondly the array of foods displayed includes a wide range of Israeli, Mediterranean and European offerings.  After all, Israel – like the U.S. – is a melting pot of people from many countries around the world, but their lifestyle is indeed Mediterranean.  We all have heard about the “healthy” benefits of the Mediterranean diet, and I can simply attest to the fact that I felt more energized and infinitely more satisfied after enjoying a breakfast in Israel than I have ever felt post-breakfast elsewhere. 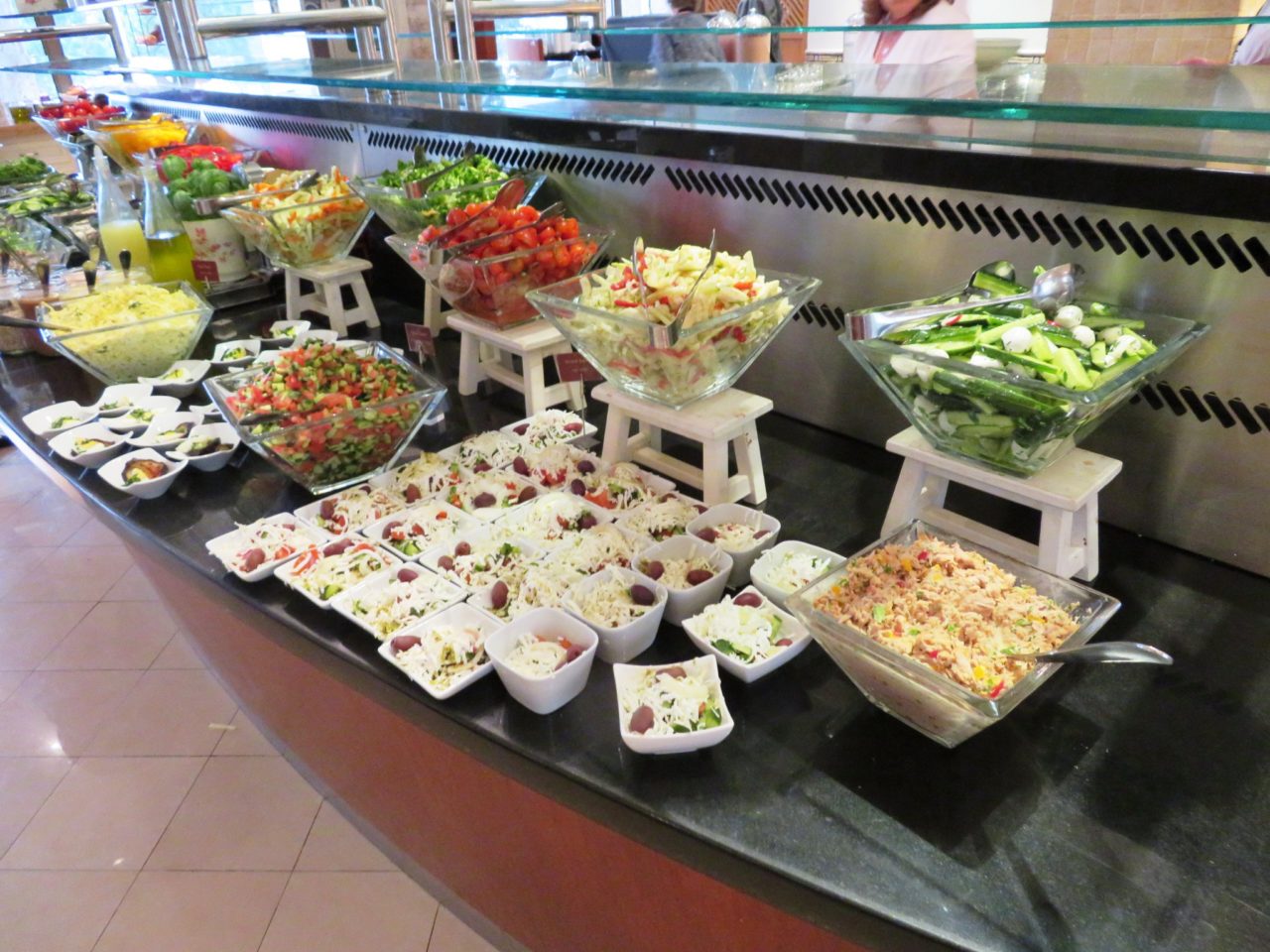 Thirdly, the aromas of the fruit and veggies in an Israeli breakfast buffet talk to me.  Honestly, they beckon me to sample them as I walk by – they are irresistible.  I first had this experience when we moved to France in 1974 and shopped at a huge outdoor farm market.  The sights and smells of all that wonderful fresh produce were so exciting and so inviting.  Most assuredly, like the French, the Israelis must use a system of crop rotation and fertilization that provides the ideal soil base for producing such aromatic and delicious produce.  How they have transformed their desert land into a rich, well-irrigated farmer’s delight is a miracle which enhances my enjoyment.

So what are the wonderful foods included in an Israeli breakfast buffet?  Let me take you on a tour … 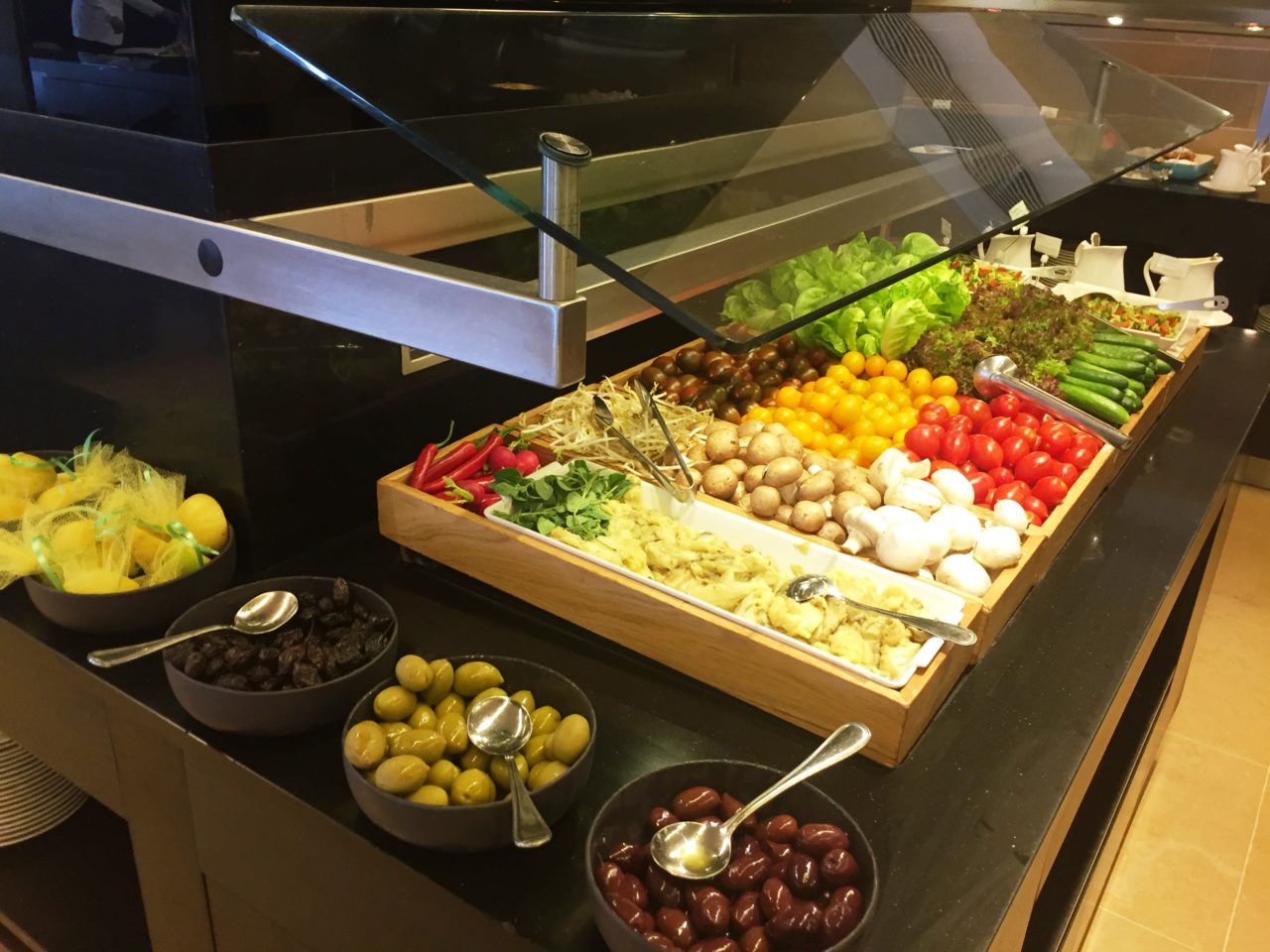 Israeli salads, surrounded by magnificent fresh produce, including artisanal lettuces, varieties of tomatoes, fennel, mushrooms, bean sprouts, pickles of various types, assorted olives and tapenades.  I found that tapenade was the perfect topping for a lightly toasted bagel when I was pairing it with some smoked fish. 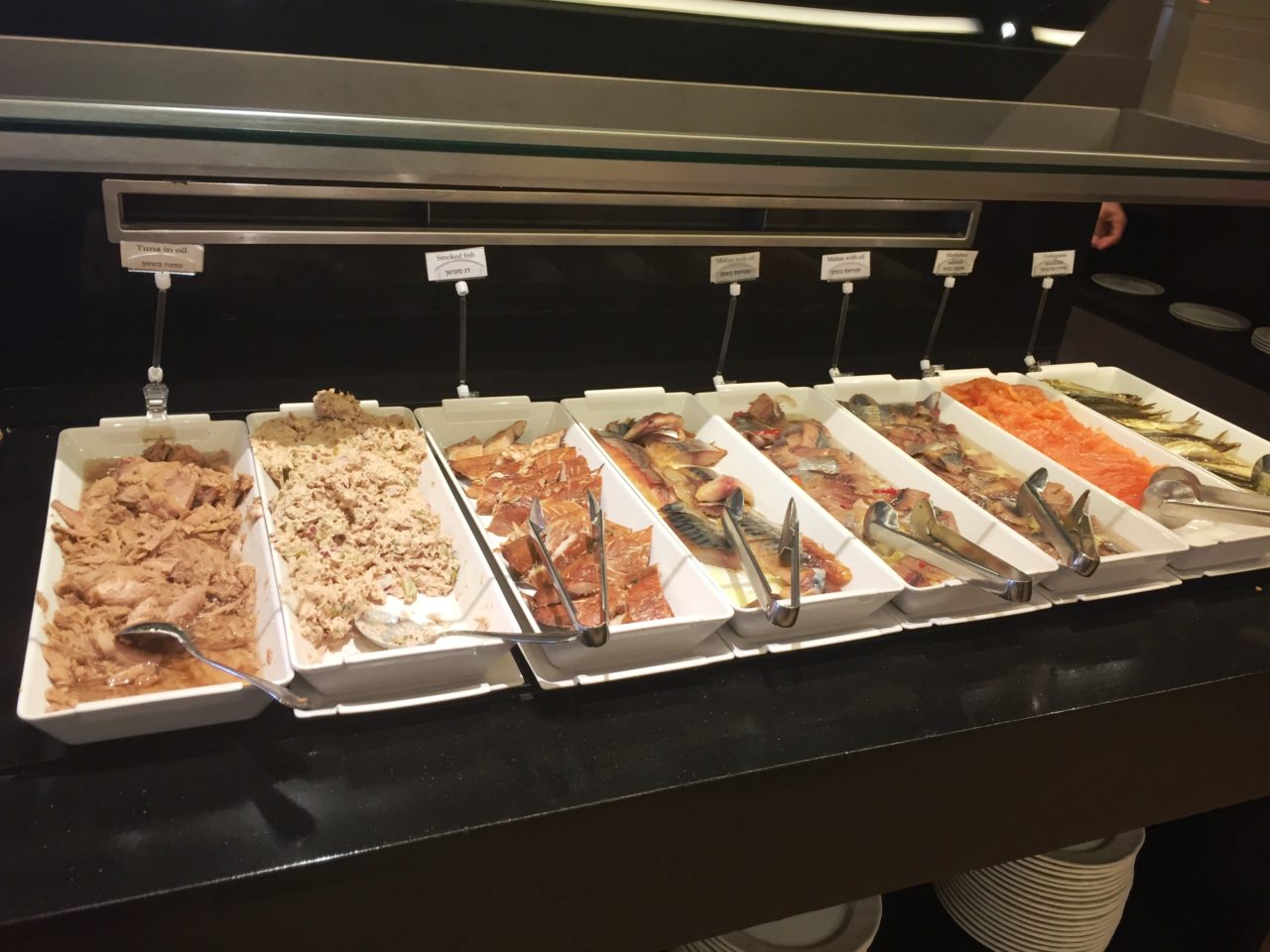 Fresh seasonal fruits, with a focus on oranges and grapefruits, and freshly squeezed citrus juices. 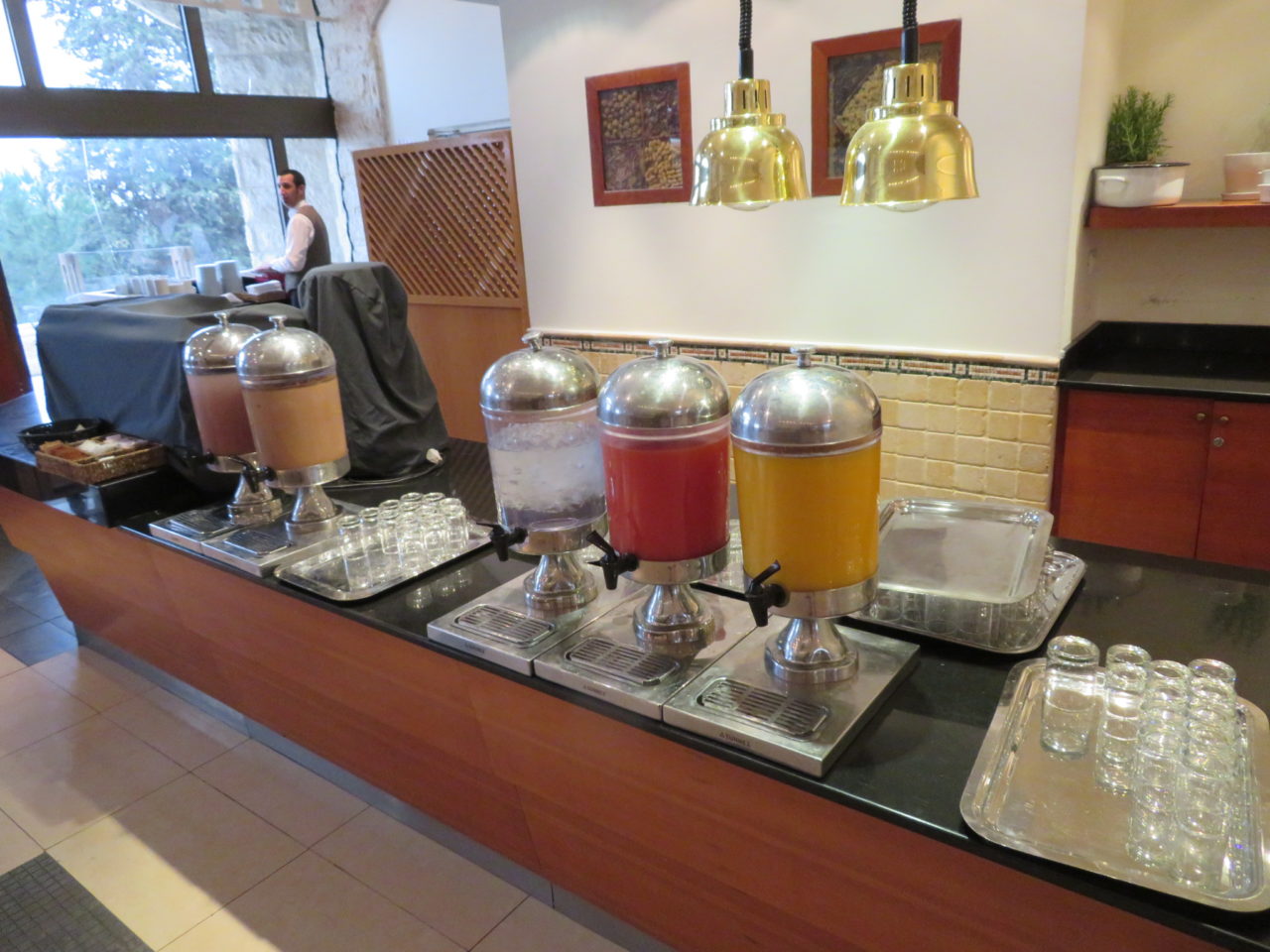 In addition to traditional omelet & eggs-to-order and waffle & pancake stations, there’s a whole array of smoked and marinated fish, along with their accoutrements including capers, lemons, onions, olives, tapenades and cream cheese.  While I enjoy a good omelet, I became seriously addicted to the fish along with fresh salads and fruits in Israel. 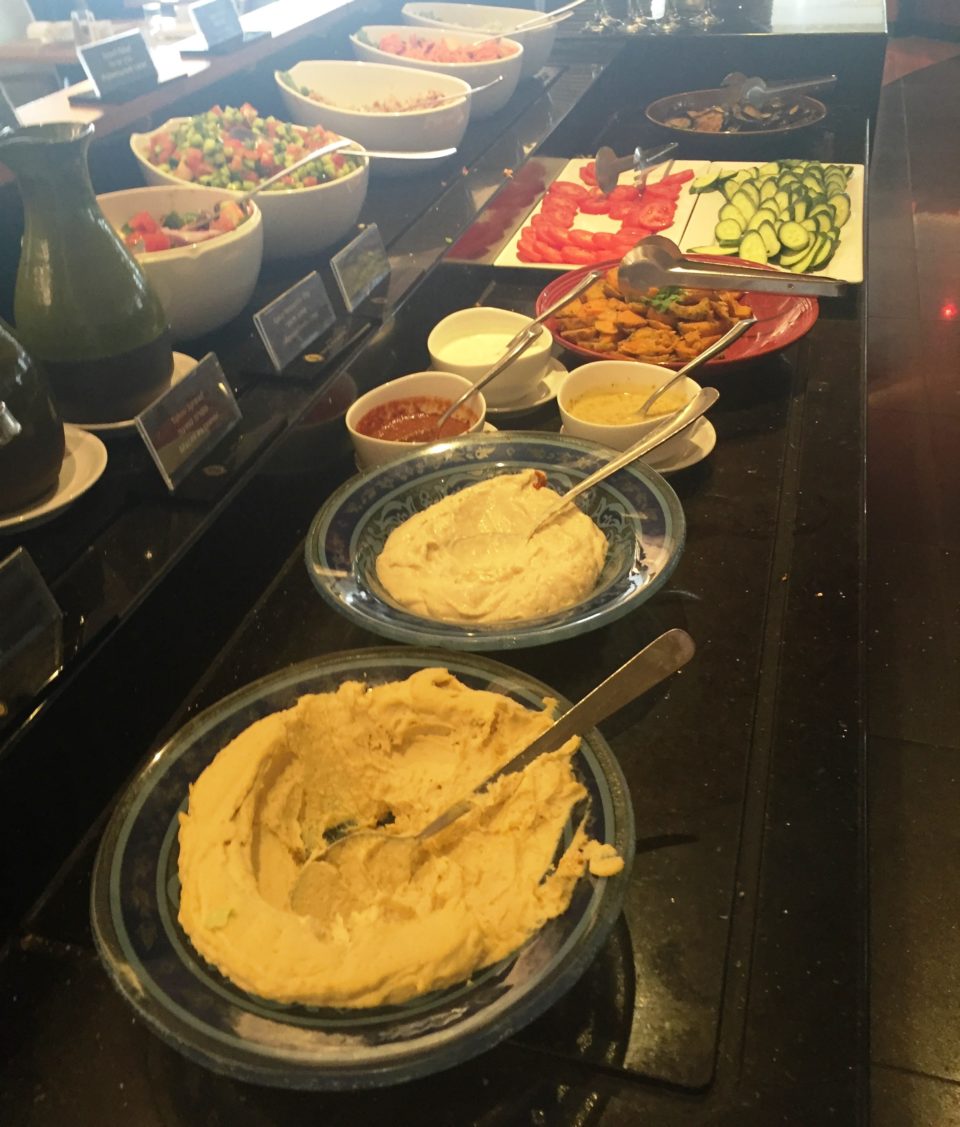 Of course there is the legendary Israeli hummus accompanied with pita bread as well as baba ghanoush … an eggplant dip which means “pampered papa” or “coy daddy” in Arabic.  These dips are a staple in Israel and a perfect complement to most any meal. 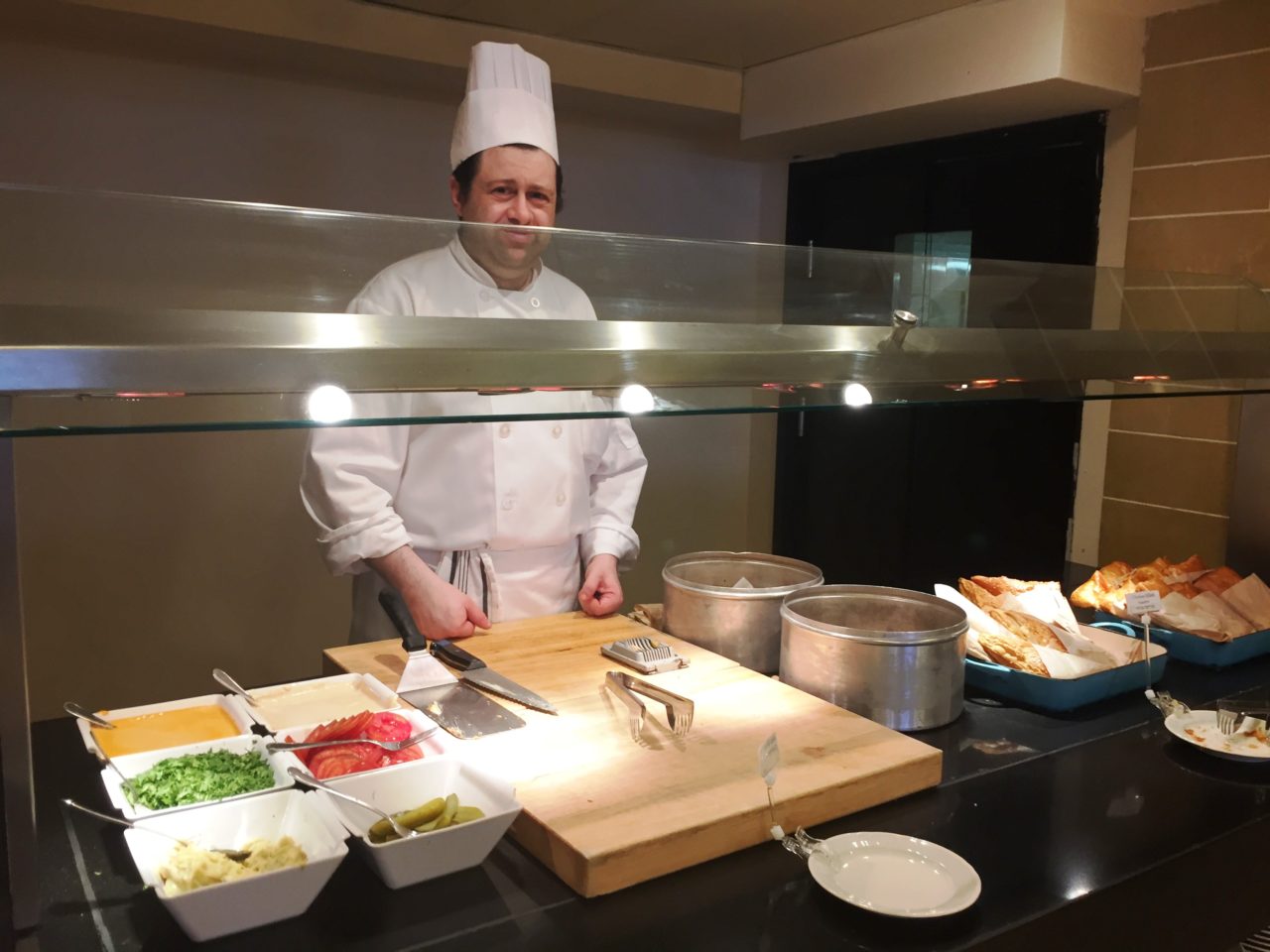 One of my best discoveries for “breakfast” is the Boureka station … serving up a flaky pastry garnished with sesame seed and stuffed to your liking with feta cheese, tomatoes, mashed potato, hummus, parsley, tahini, roasted red pepper sauce and finished off on the grill.  Indescribably flavorful and very satisfying with some fresh veggies and fruit.  Not every hotel offers this station, but the Dan Tel Aviv does. 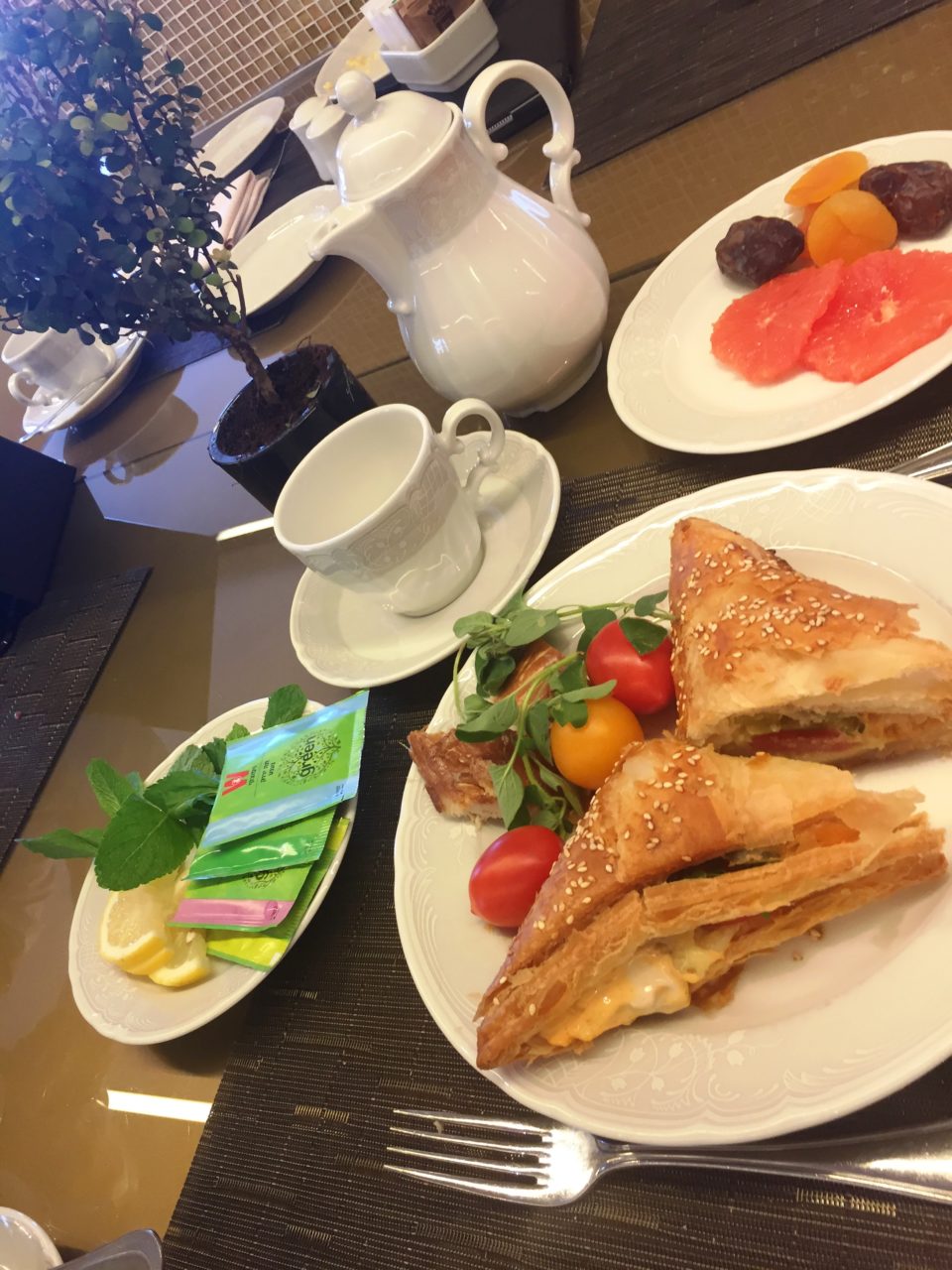 Artisanal Israeli cheeses and yogurt rival some of Europe’s finest. 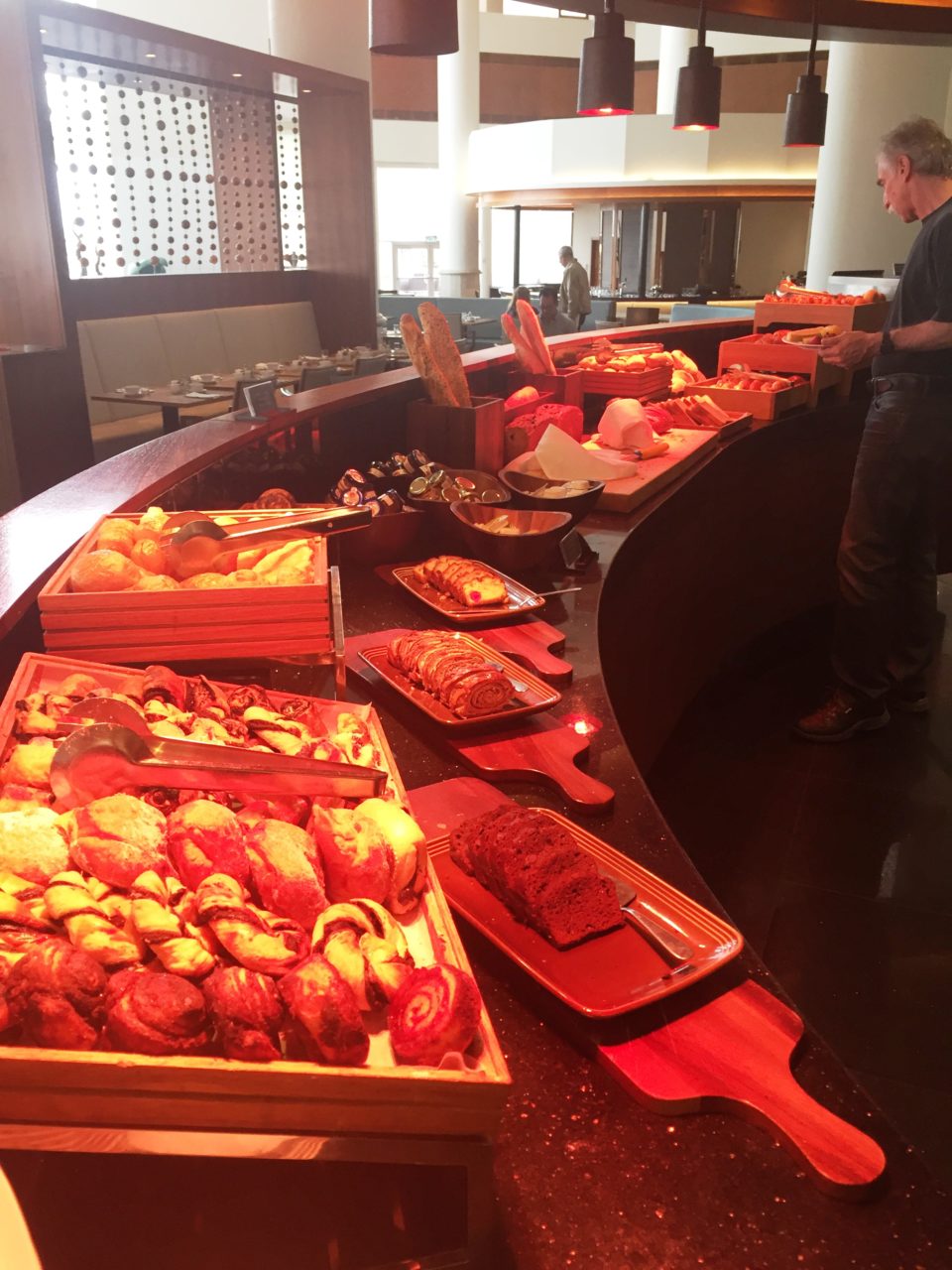 Artisanal breads for you to cut to your taste and light airy bagels are displayed along with traditional loaves and home-made jams besides a toaster for you to heat or toast the bread to your liking. 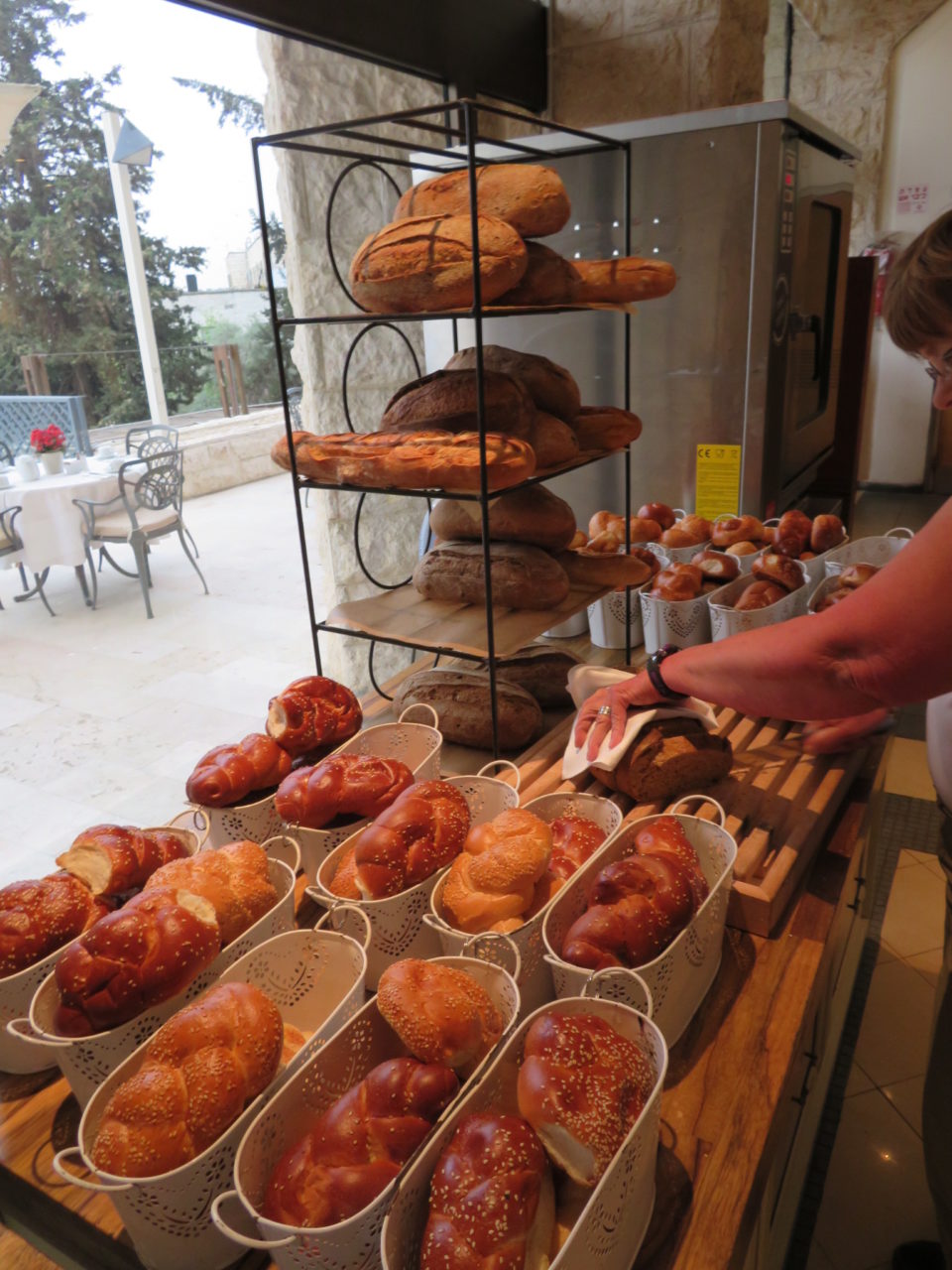 The neighboring station offers up a panoply of freshly baked croissants, plain & chocolate, pain au chocolate, and other sweet rolls.  Plus, to satisfy your craving for sweets, there are dates and other dried fruits, and always a traditional cheesecake or Shabbat cake typically flavored with citrus, dates, cinnamon or poppy seed. 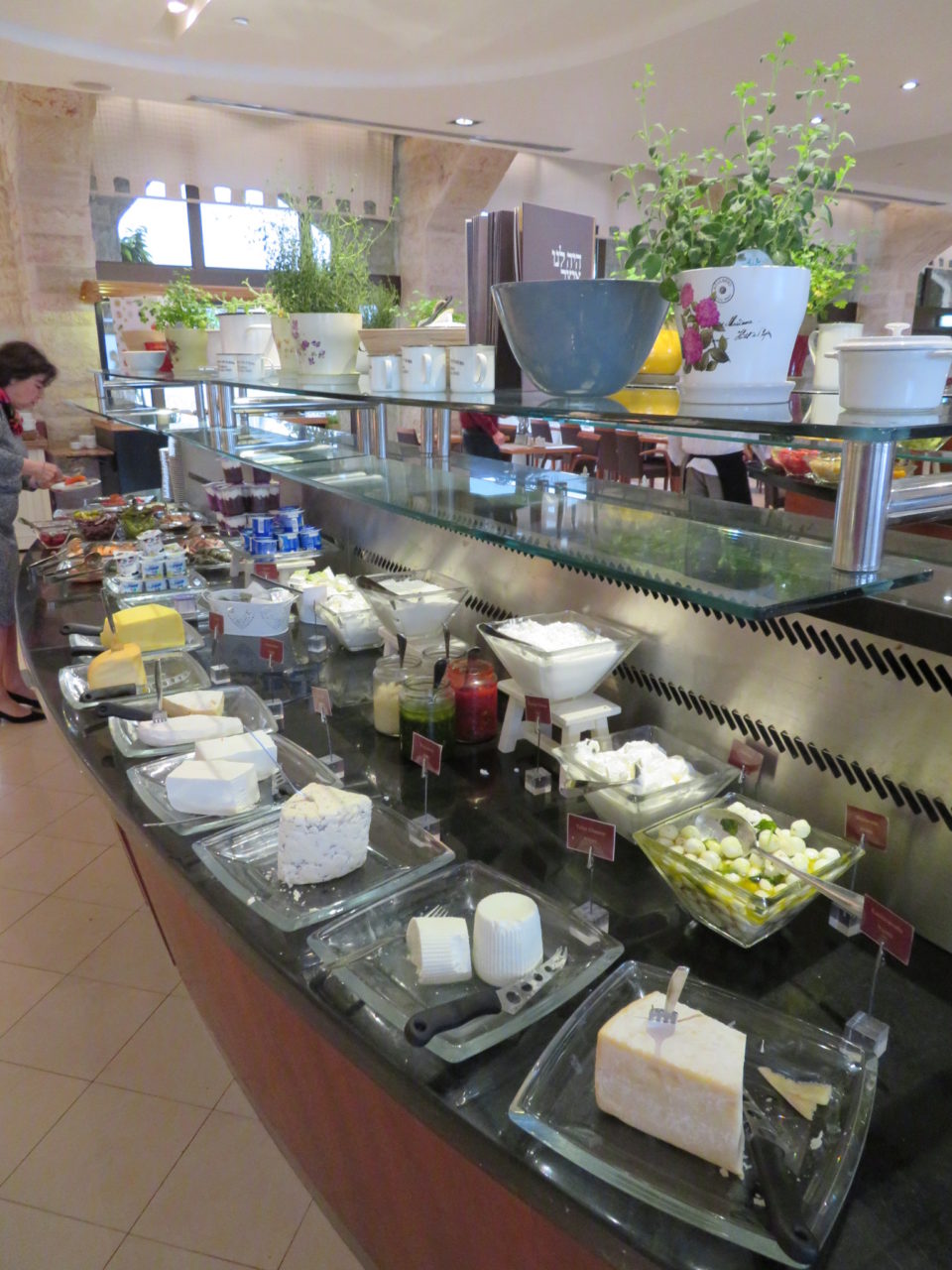 Assorted coffees & teas are usually available at the buffet but waiters will come around to refill your cup at your table.  After drinking a large glass of the sweetest, most delicious orange juice I have ever had, I always moved on to a pot of green tea with my “main course” and then finished up with a double espresso to accompany a slice of cake for “dessert”. 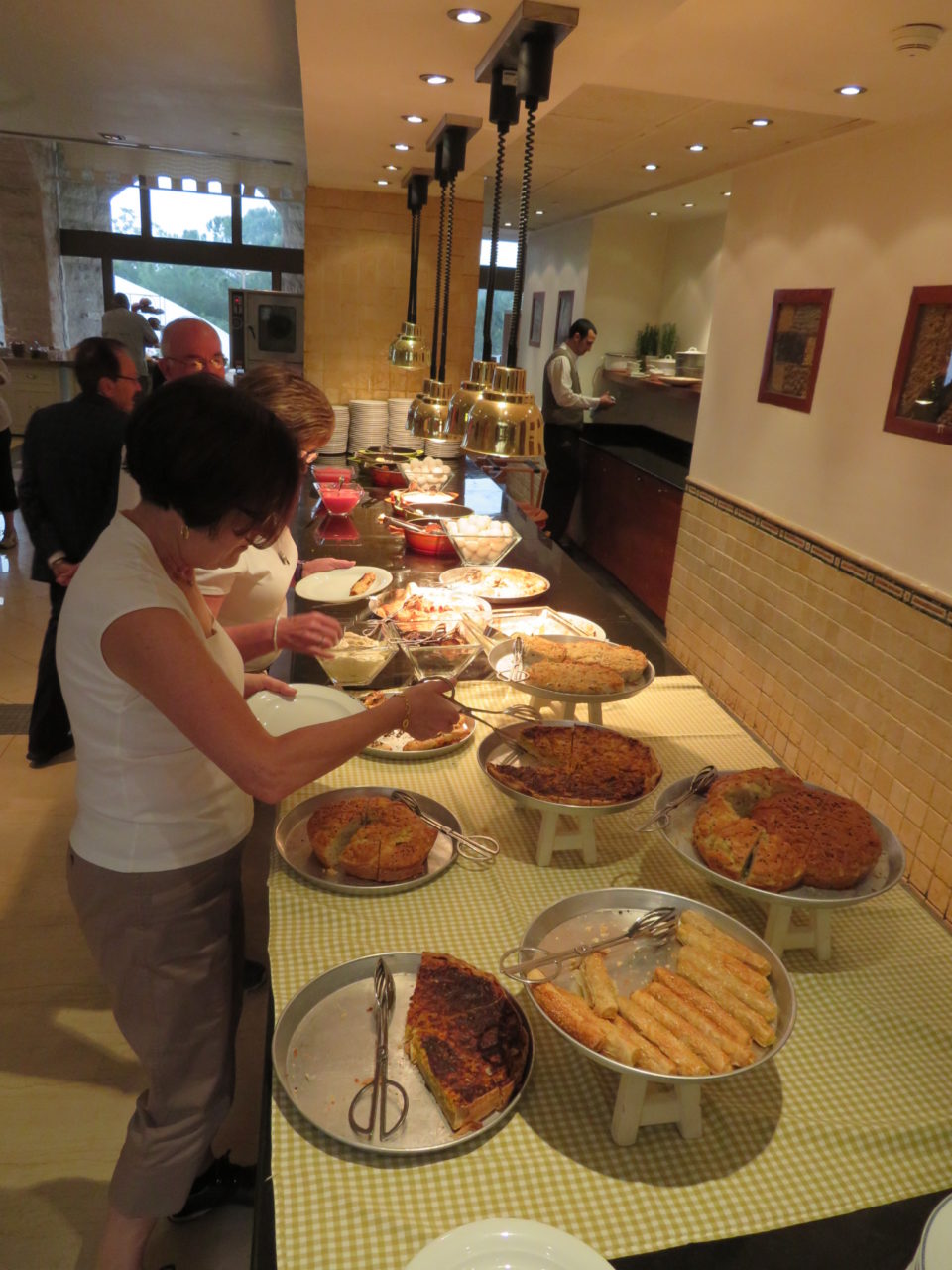 Fodor’s calls the Israeli breakfast “legendary”.  I just call it the “best in the world”!

Stay tuned to BonVoyageurs.com for our writings about our Israel trip as well as for more Countries of the World as we share our joie de vivre from around the world. Luxury escapes, cruises and city breaks to Quebec City, New York, Washington, Buenos Aires. In Europe, places like Paris France, Nice France, Provence and the Cote d’Azur (French Riviera), Tuscany and Florence in Italy, Rome, Napoli and the Amalfi Coast. In Asia, countries like China, India, Nepal and so much more!

TOP 10 travel experts and influencers on social media and rated as one of the most influential travel bloggers in the world, Denis and Lynn Gagnon have been circling the globe for more than 45 years. Former international business travelers, they know how to travel - with class, comfort, and style. Members of the National Press Club, PTBA , NATJA and SATW. Wish to connect? Email them at [email protected]il.com.