Start or finish your Alaska Cruise Tour on land! 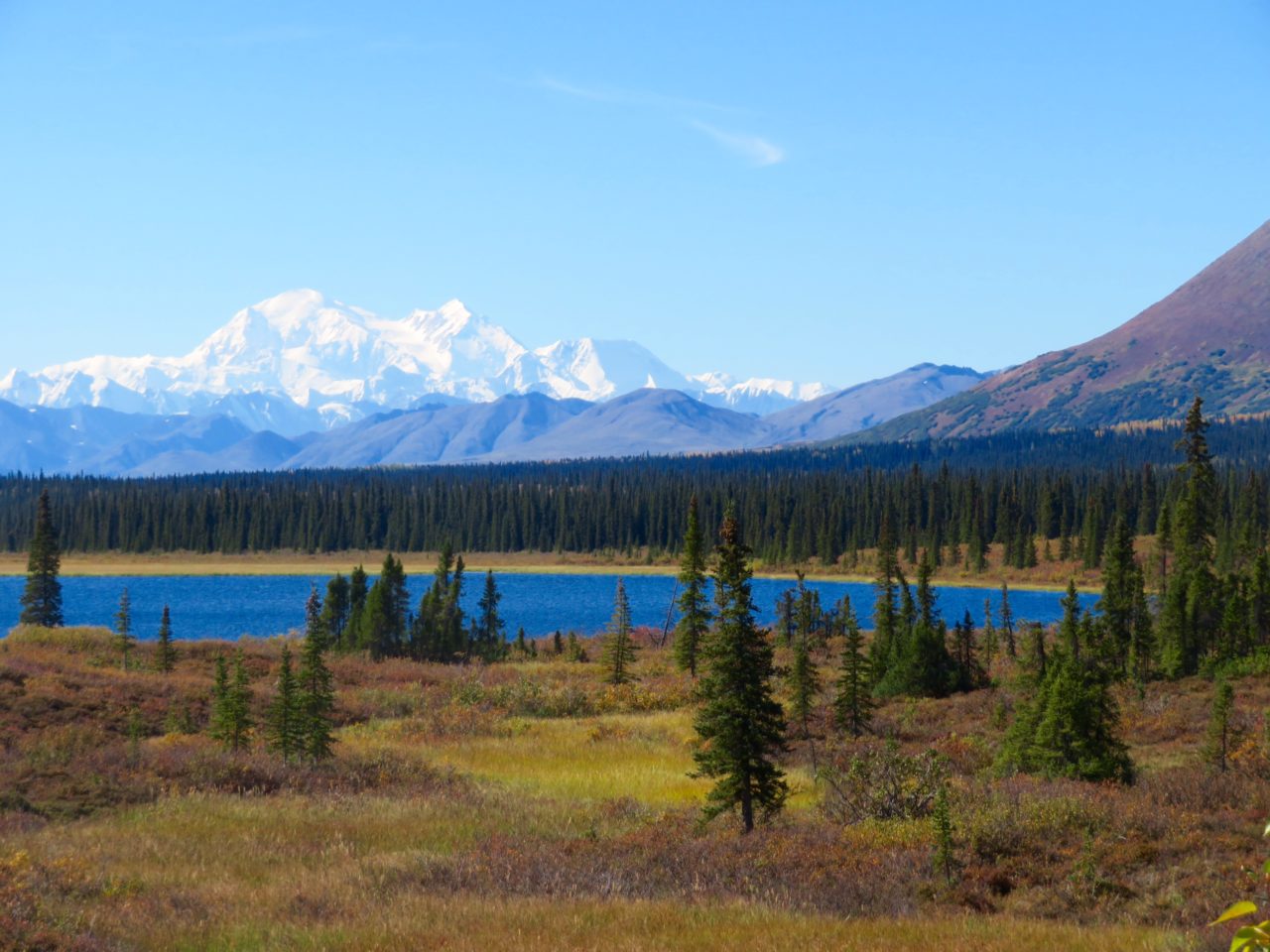 Are you considering taking an Alaska Cruise?  After all, the Alaska cruise is on the bucket list of most American tourists … and for good reason.  It is a glorious adventure in one of the world’s last unspoiled regions.  You can get a glimpse of Alaska on a “classic” one week sea cruise with land excursions of the ship, or you can take a 10- to 15-day land and sea Alaska cruise tour for an even more authentic taste of “The Last Frontier” state.  We have done both, and it was the land and sea cruise which truly left us with spectacular memories we will never forget. 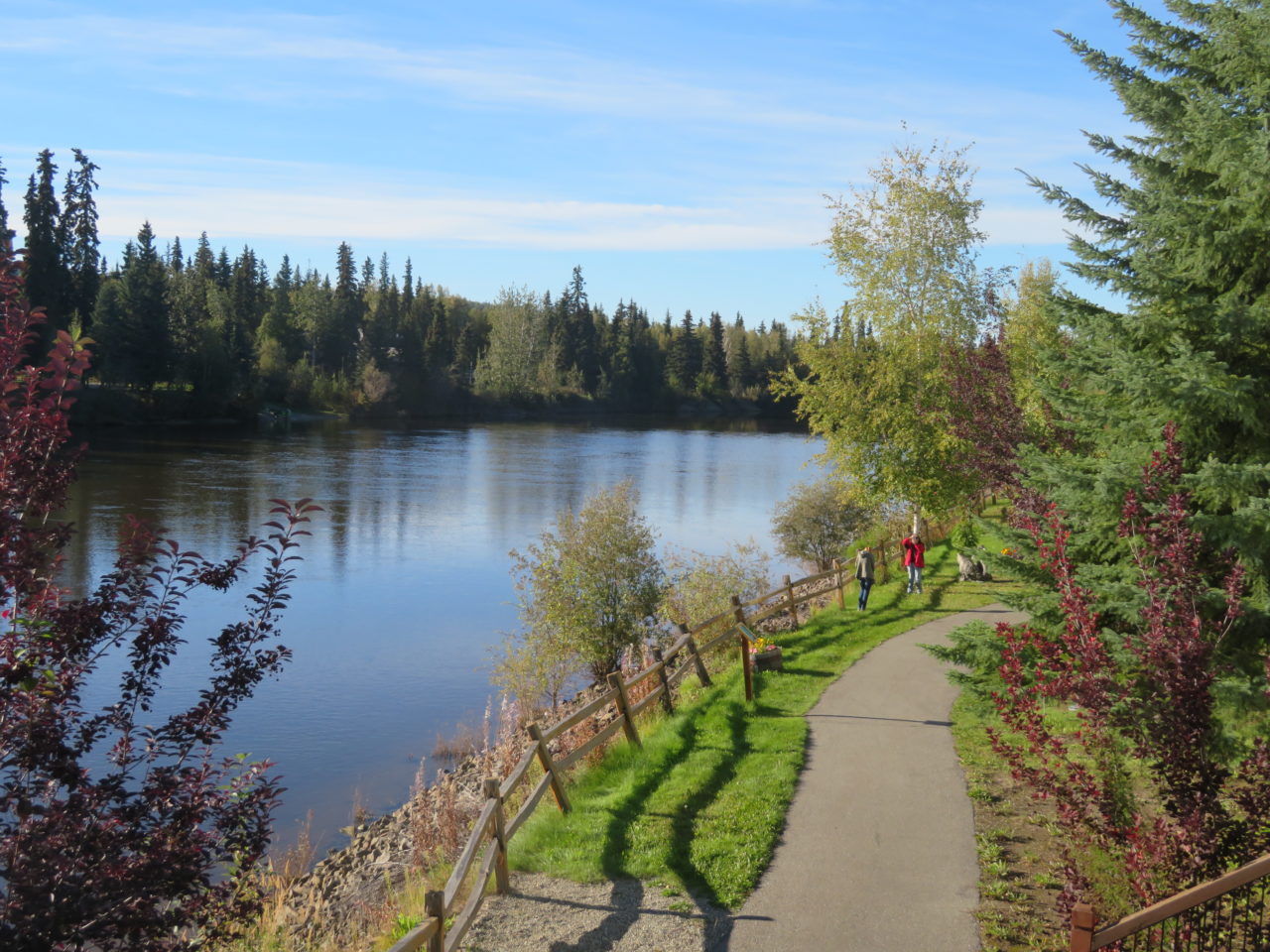 Our first experience was with the “classic” one-week cruise itinerary used by most cruise lines, usually out of Vancouver or Seattle.  It followed the coast along the most southern tip of Alaska with stops in Skagway, Juneau and Ketchikan, included two days of magnificent glacier sightseeing from the ship and offered excursions to the local towns. While it is a very scenic cruise to take, particularly for tourists who have never been to Alaska, it offers just the “tip-of-the-glacier” of Alaska experiences. 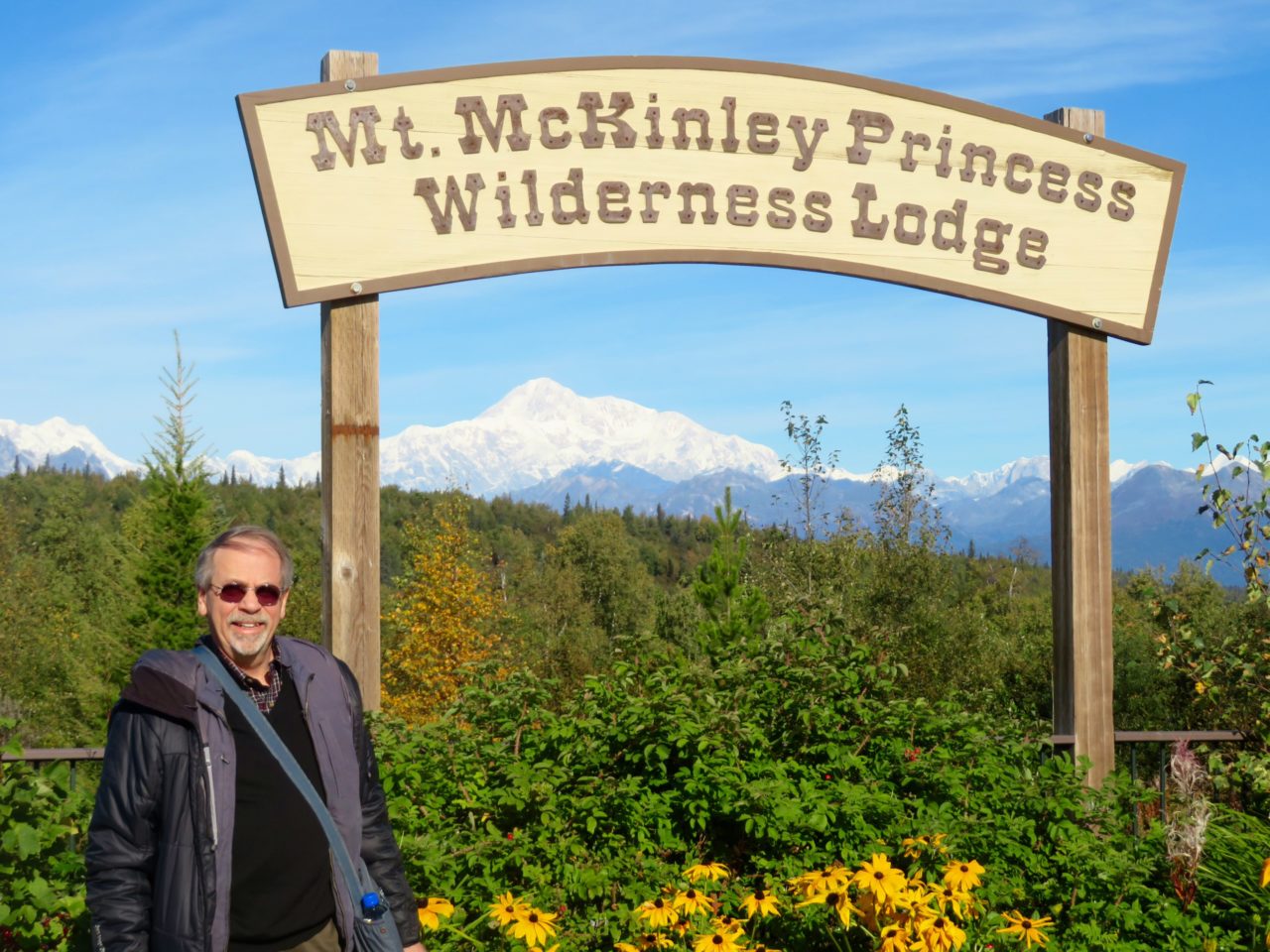 It was not until Princess Cruises invited us to experience their land and sea Alaska cruise, which they​ refer to as an ” Alaska Cruise Tour“​, that we discovered how much more exciting Alaska can be as a cruise destination.  If you want to experience the true wonders of the “49th state”​ and take in its breath-taking scenery and natural beauty, I would unequivocal​ly​​ recommend​ that you start – or finish – your Alaska Cruise Tour on land!​ 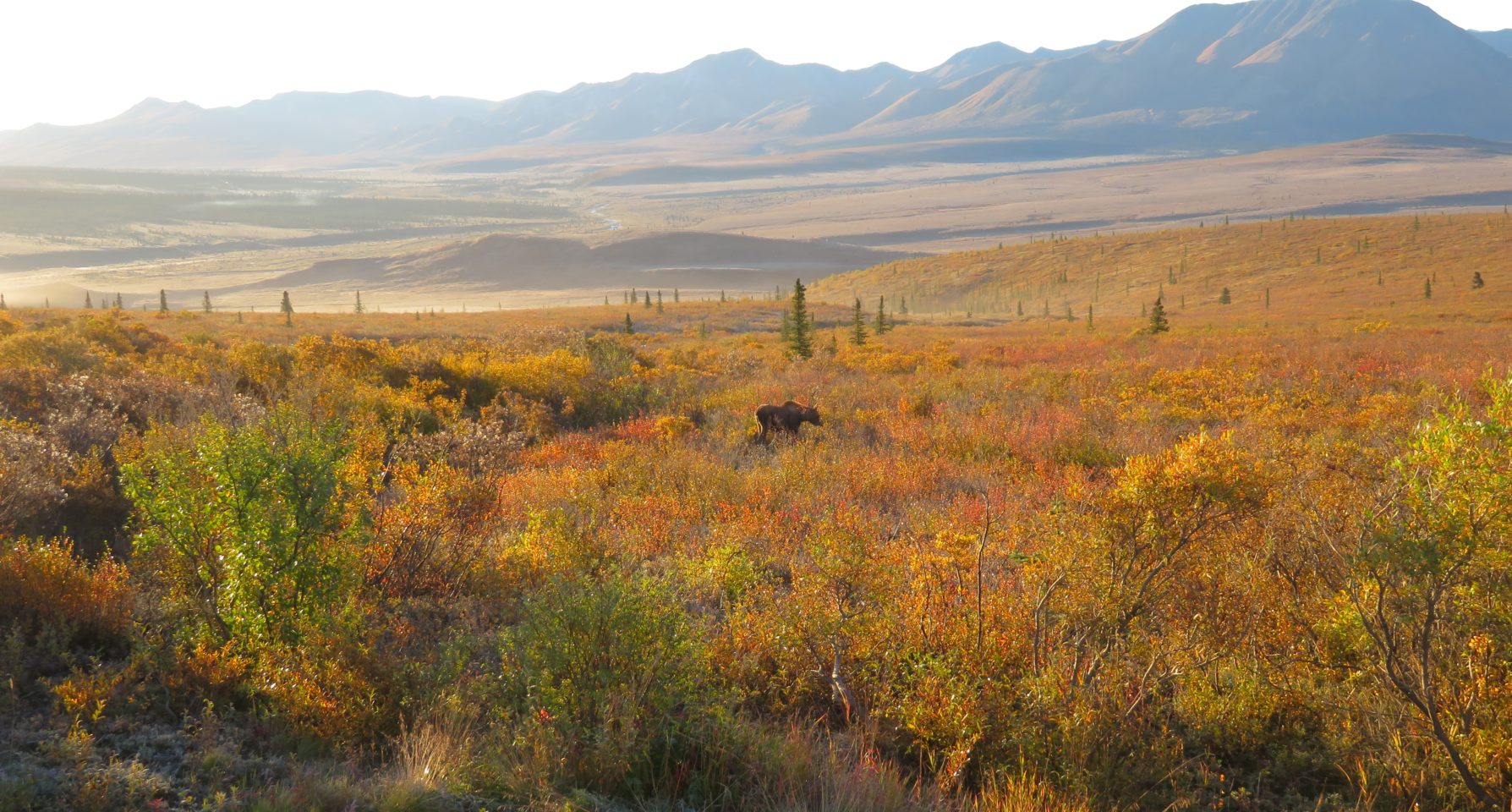 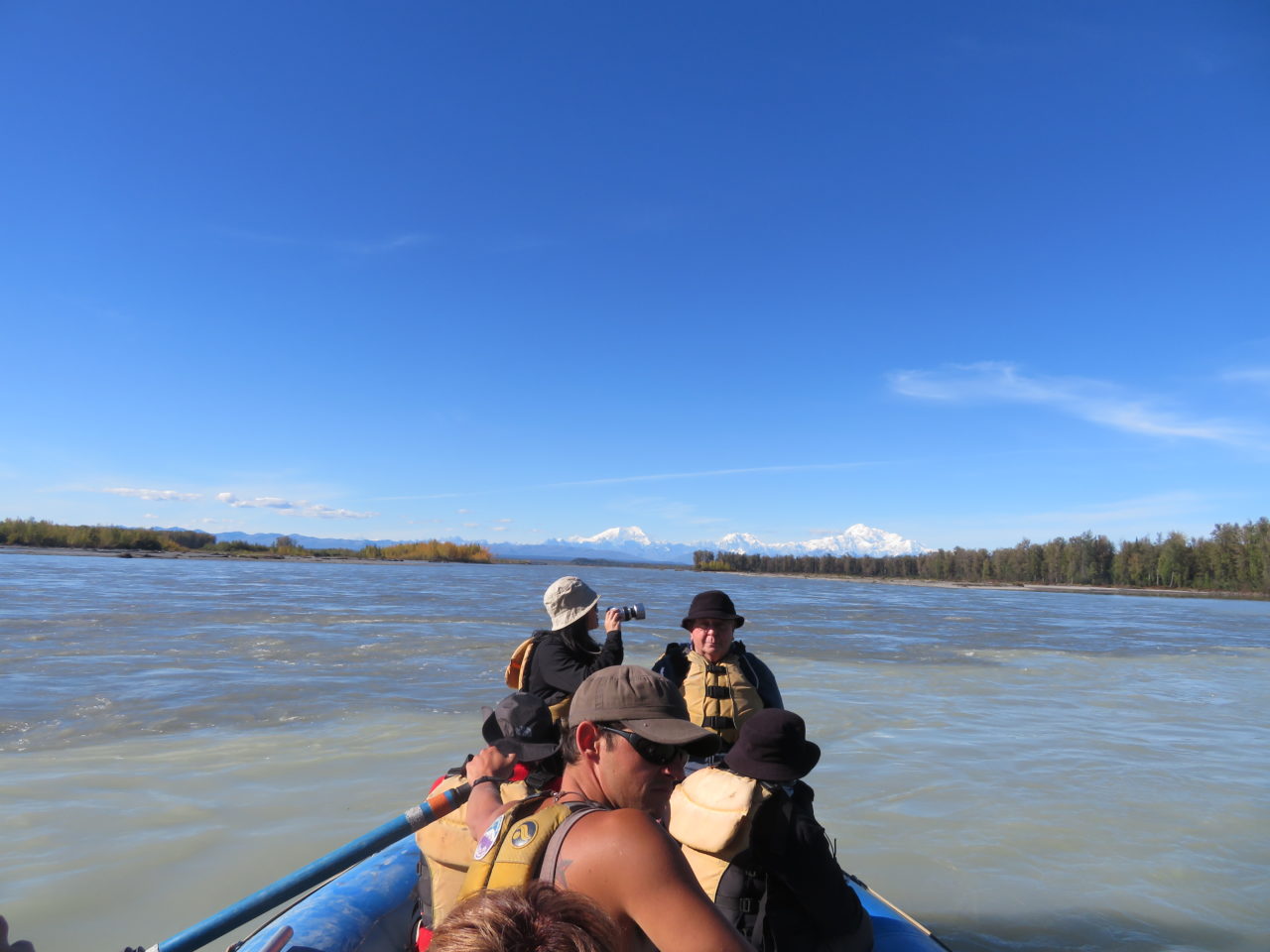 River rafting in the shadow of Denali ~ Alaska Cruise Tour

Alaska is by far the largest state in the United States, more than twice the size of Texas, the second largest state. Yet, ​many​ Alaska cruise​s​ only sail along the coast of the panhandle section of Alaska, a territory in the southeast part of Alaska which accounts for only 6% of the land area of the state of Alaska and less than 10% of its population.  In other words, a typical Alaska cruise only scratches the surface of what the state of Alaska has on offer for visitors. On the other hand, cruises which include a land tour of Alaska​, ​either before or after the sea portion of the cruise​,​ will bring the visitor to the part of the state which accounts for the majority of its population, its land mass, and it’s touristic attractions. The simple way to say this is that if you want to see Alaska, you​ must start​ – or finish -​ your Alaska Cruise Tour on land! 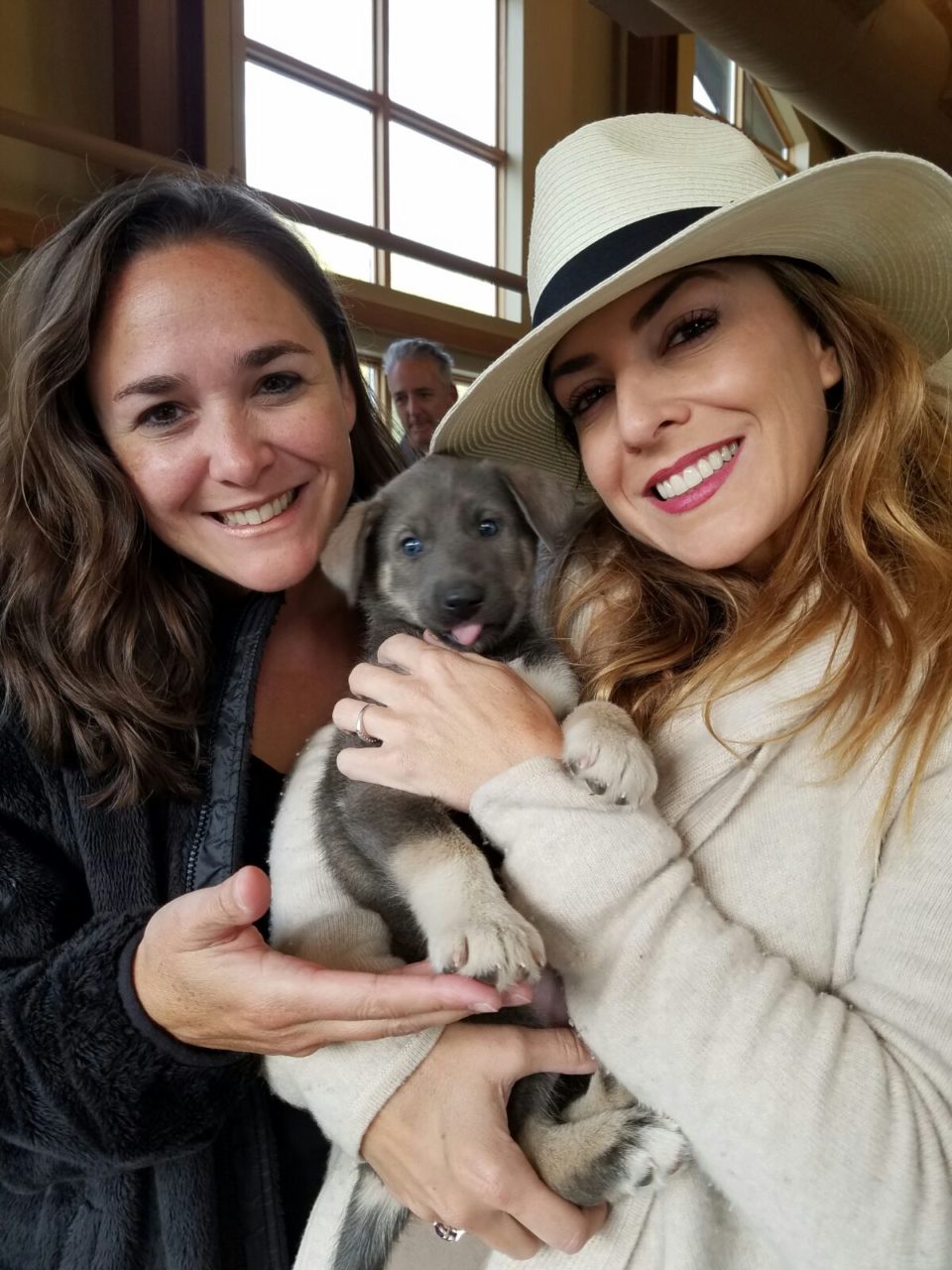 Alaska contains the four largest national parks of the ​entire ​United States, and they are all located in the upper mainland of Alaska, the area where the “​land​”​ tour portions of Alaska cruises will bring you. The majestic beauty of the parks is simply breathtaking. 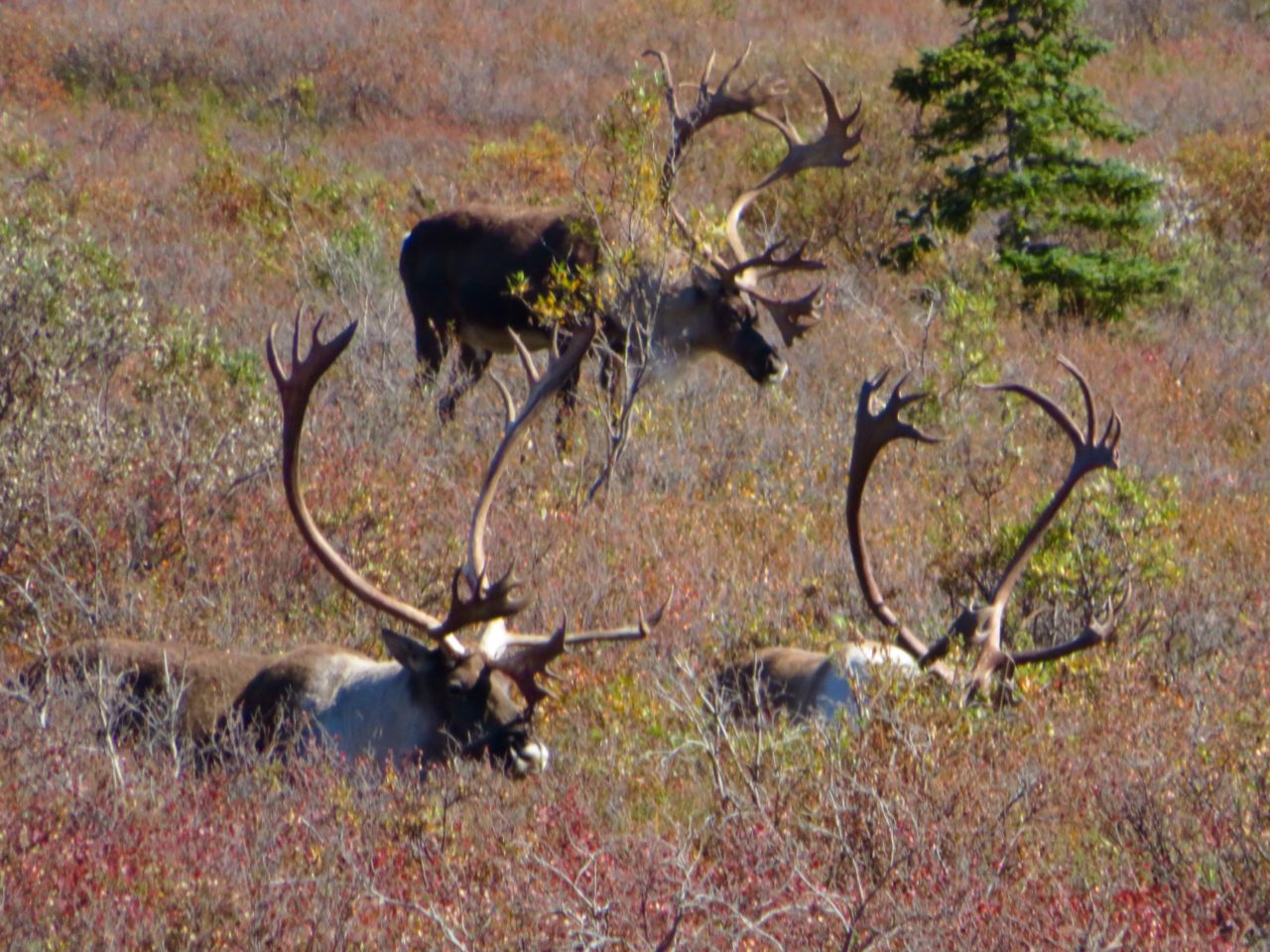 All land tours of Alaska wil​l, at a minimum​,​ bring visitors to Denali National Park, located between Anchorage and Fairbanks, the two largest cities in Alaska. Denali National Park is by far the oldest national park in Alaska, established in 1917 around what was then called Mount McKinley to protect the area’s abundant diverse wildlife, including grizzly bears, caribou, moose and the ubiquitous white Dall sheep.  The white caps of Denali, the tallest mountain in the United States and in North America, dominate the skyline of this region of Alaska and can be seen as far as Anchorage, 160 miles away on the Pacific coast. Denali National Park is so well protected that it is home to the only sledding dogs of the National Park Service, used for traveling around sections of the park in wintertime. 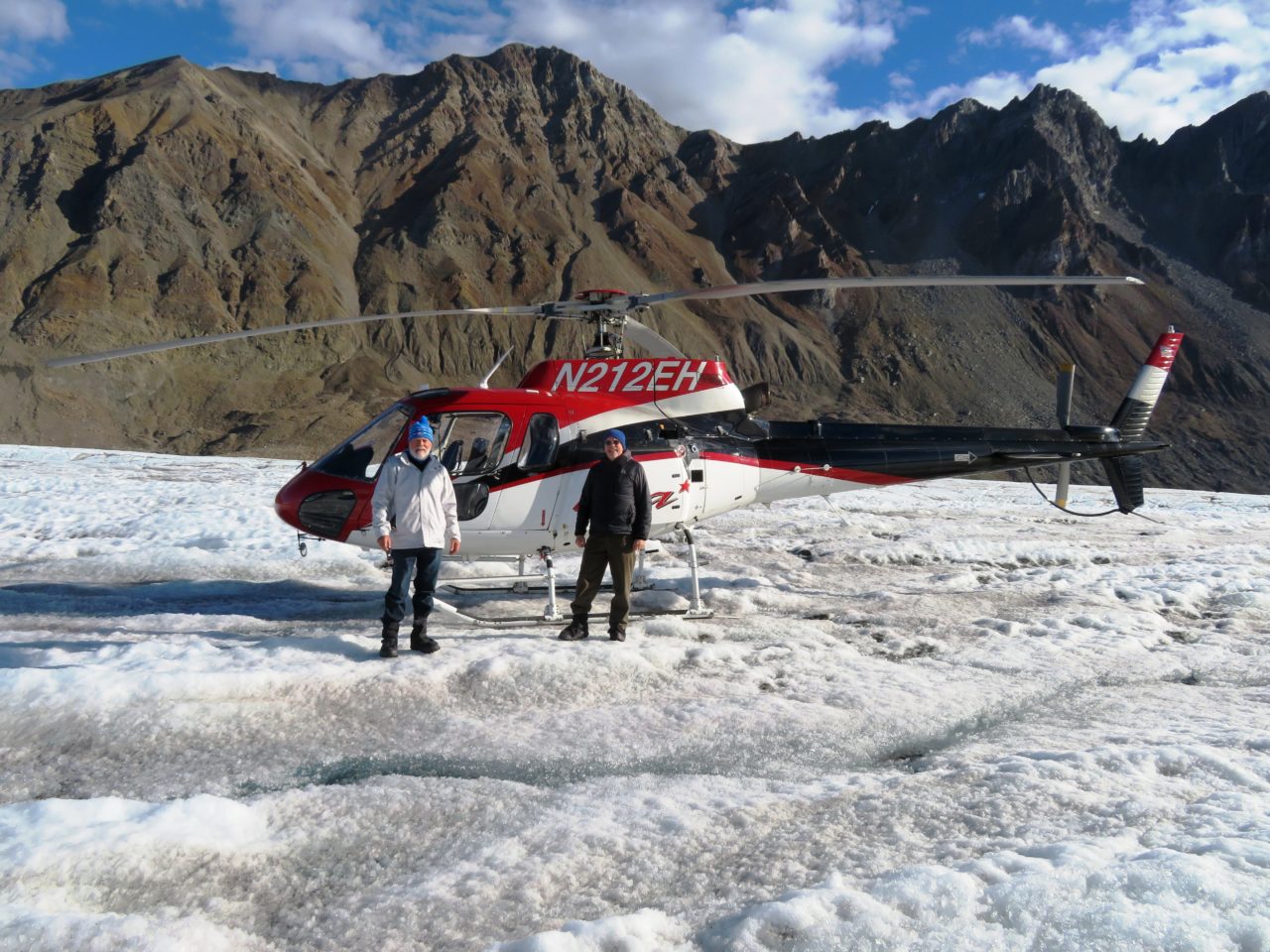 Helicopter landing and hiking on a glacier ~ Alaska Cruise Tour

W​ith Princess Cruises, w​e had the chance to tour Denali National Park, admire the magnificent views and gaze in amazement at the animals we encountered along the way.  Our bus driver, a well-trained National Park Service ranger, had a keen eye for spotting the caribou hiding in the tundra, the bear napping in a stream, the Dall sheep spotting the tall mountain ridges, and each time he quickly stopped the bus to give us the chance to fully take in the scene and shoot some photos. 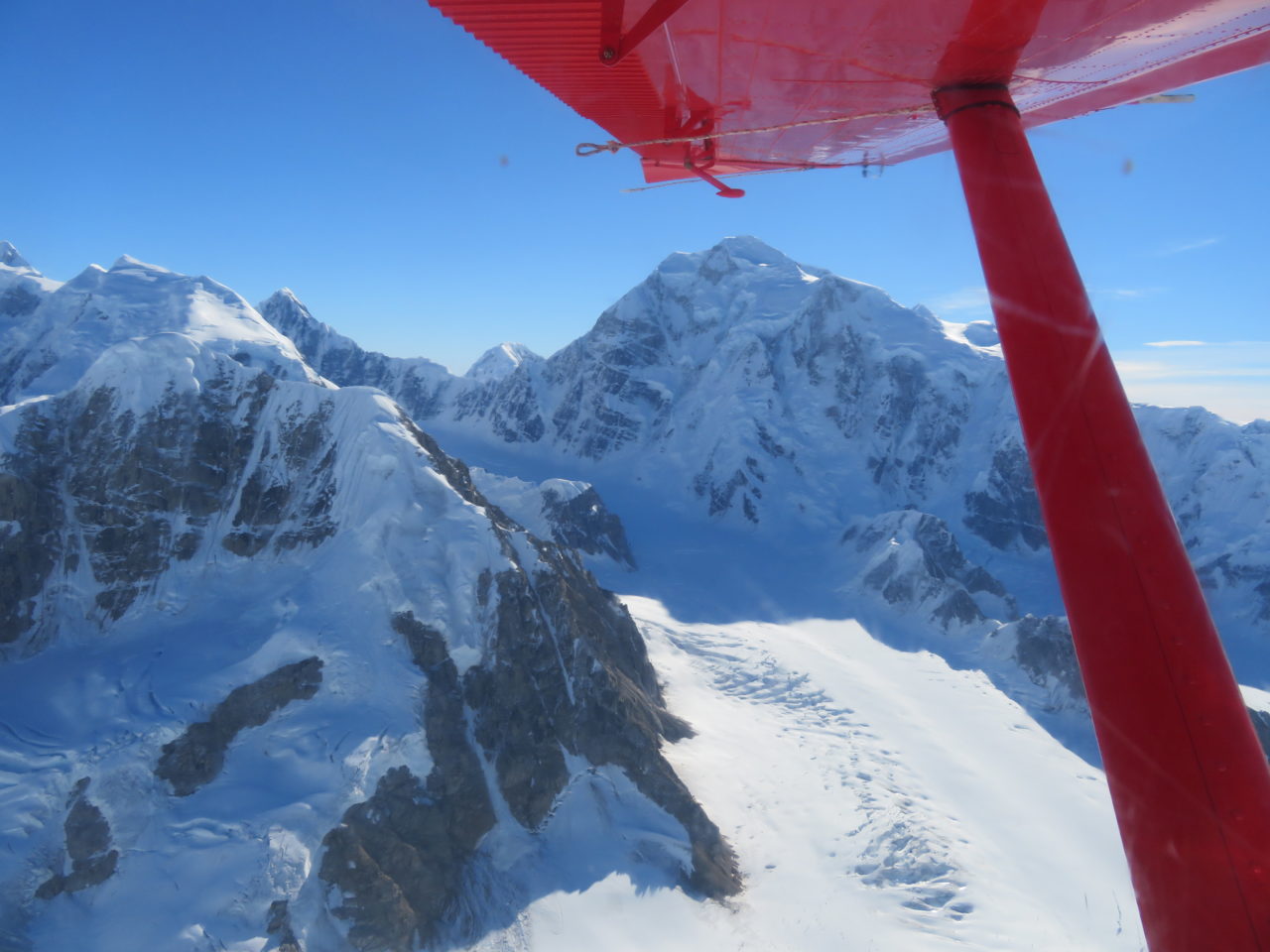 Some of the Alaska Cruise Tours may bring tourists to the other three giant national parks of Alaska, the Wrangell-St.Elias, America’s largest national park, the Gates of the Arctic and the Katmai national parks, and that gives us one more reason to want to return to Alaska. There is no need to go to the far corners of the world to find remarkable natural beauty.  Simply start ​- or finish – ​your Alaska Cruise Tour on land! 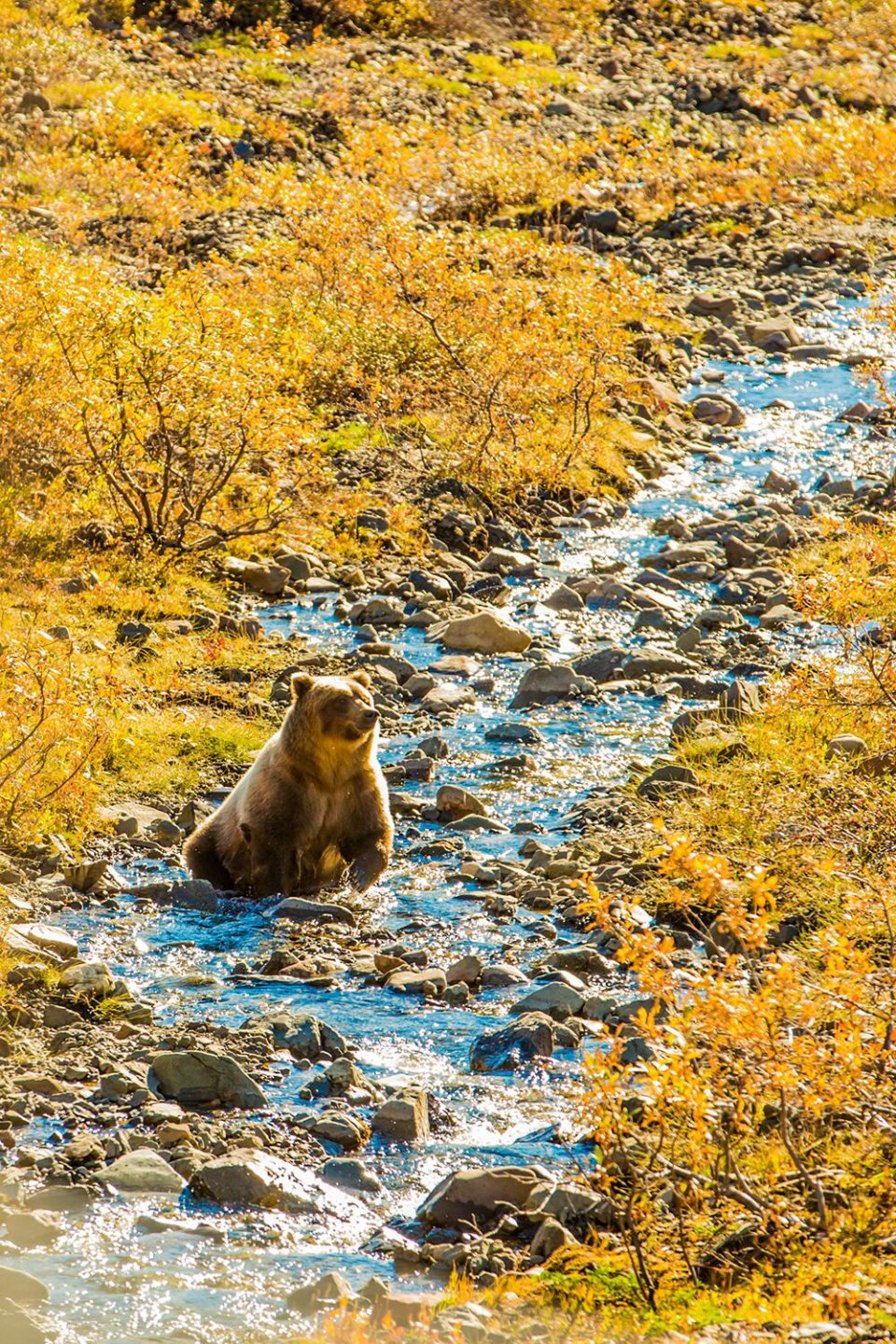 The range of experiences made possible by the vast natural wonders of Alaska is truly overwhelming. During our sea and land cruise with Princess Cruises, we had the opportunity to sample quite a few of these extraordinary adventures. ​ Perhaps our favorite was flying on a small single-engine plane around Denali and the surrounding mountains and glaciers​ for the awesome views and photo opportunities. We were fortunate to be flying out on a clear day, with a stunningly blue sky which offered a marvelous contrast to the sparkling white of Denali’s snows and glaciers. 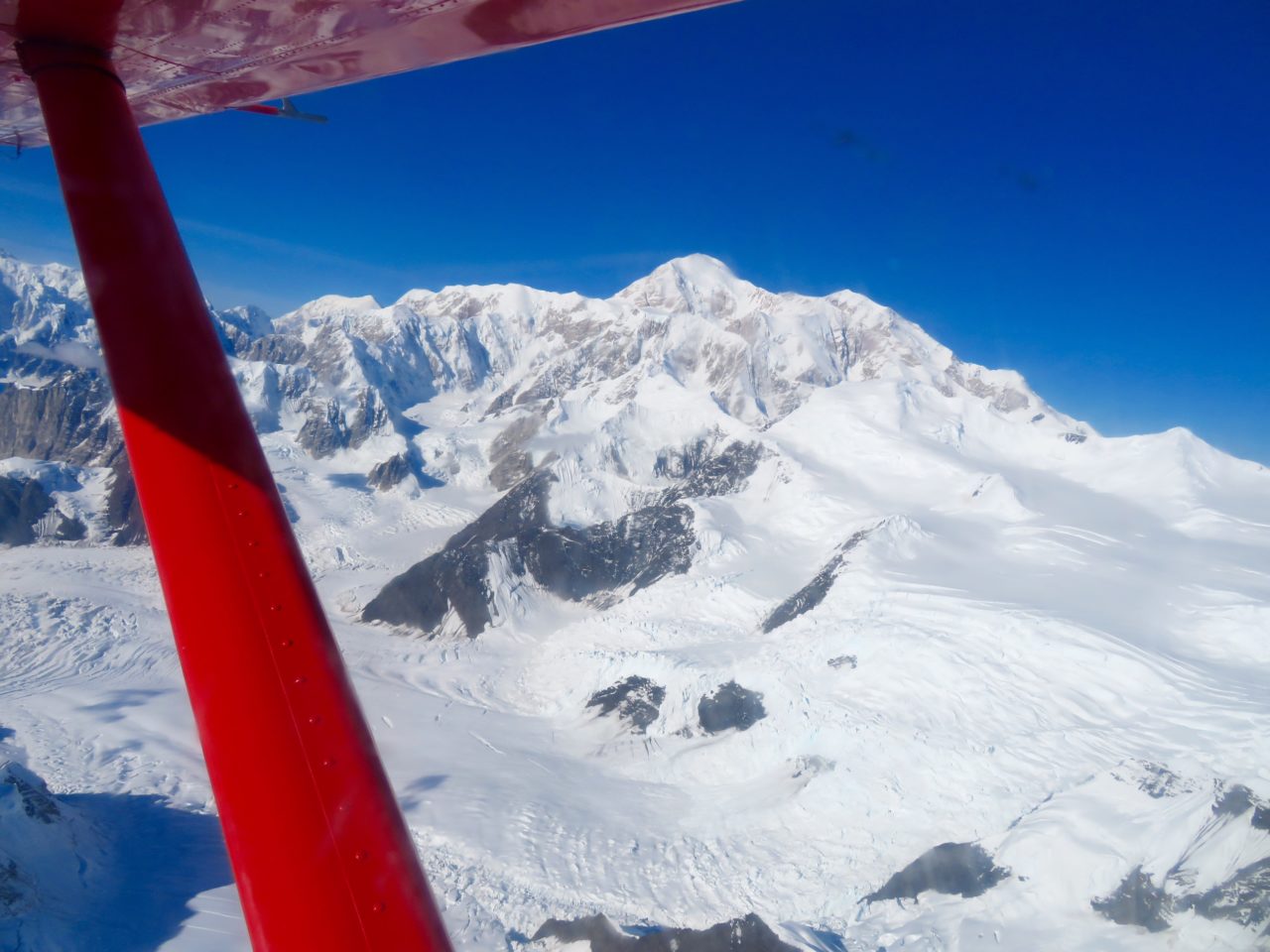 We also thoroughly enjoyed land​ing​ by helicopter on a glacier and​ ​hiking on mountains of ice and crevices​, and river rafting in the shadow of majestic Denali. Visiting ​the beautiful landscape of Alaska aboard Princess Rail, a Princess Cruises luxury train which offers drinks and bistro dining, provided yet another fabulous was to view and enjoy the wonders of Alaska​. In fact, every day of our land and sea cruise was an exciting day of adventure​ that few places in the world can offer.​ 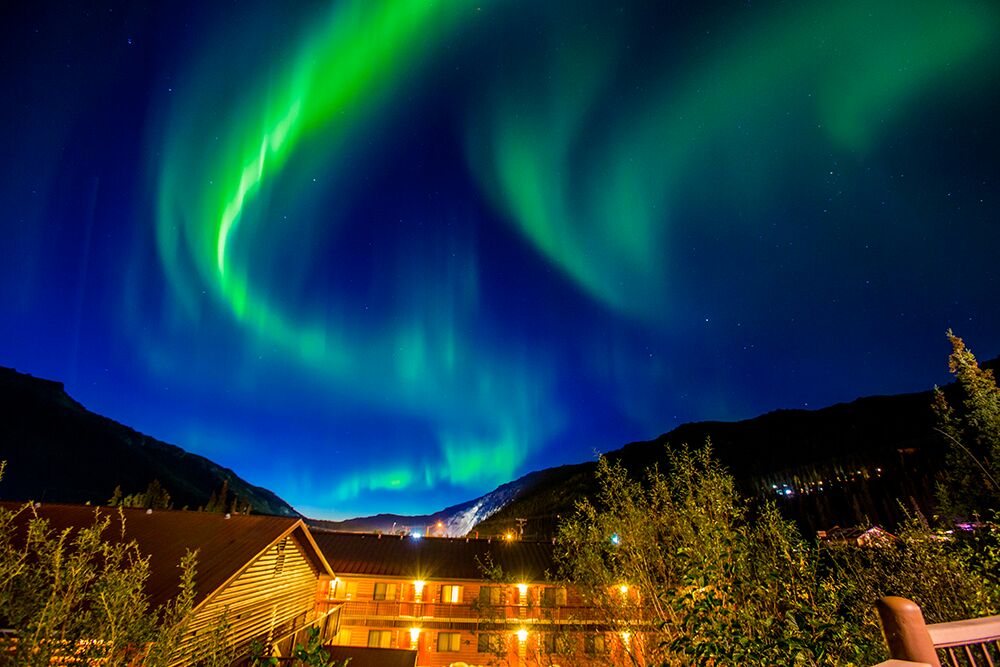 Alaska has an exotic charm and allure all its own.  ​Even though Alaska is ​very much ​​a part of the United States, the climate and the terrain are significantly different ​from that of the Lower 48.  Geographically, the “49th state” is ​at its closest point 500 miles north of the ​Lower 48​ states​, with the Canadian province of British Columbia separating the southernmost part of Alaska from the border with the Lower 48.  After all, Alaska‘s neighbor to the east is the Yukon Territory and the Northwest Territories of Canada, while to the west is the Bering Sea with Russia only 55 miles away.  Consequently, it is not too surprising that our land and sea trip to Alaska made me and my brother feel at times like we were on an “exotic” vacation​. So it would not be too big of a leap to say that a land and sea cruise to Alaska offers the allure of foreign travel without any of the risks or disadvantages​ of “foreign” travel. 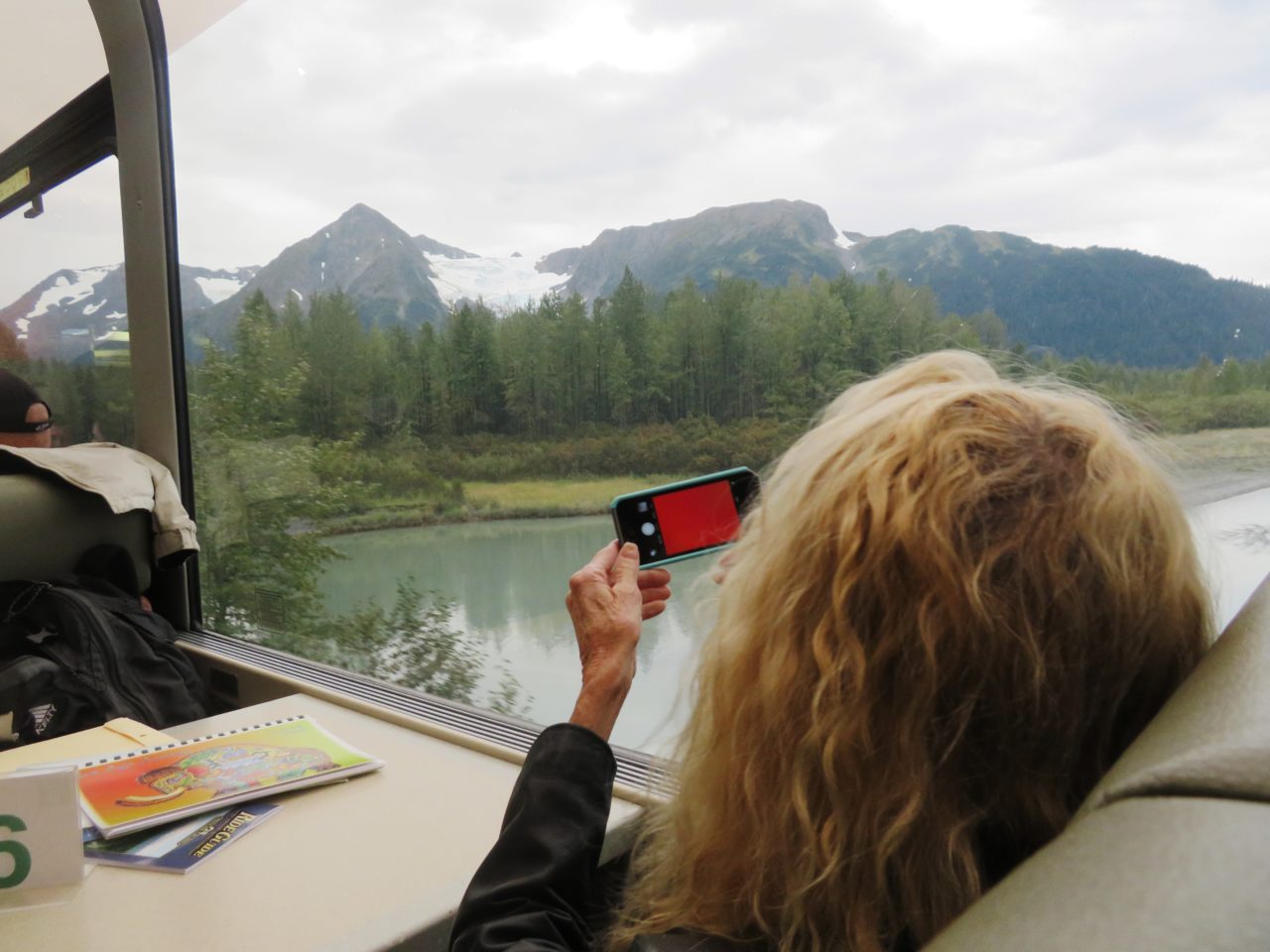 Princess Cruises ​has​ ​made significant ​invest​ments in Alaska where it owns five ​Princess Lodges.  Each ​Lodge is named for its location and ​strategically located near Alaska‘s national parks​ ​as is Princess Rail, a train service with glass-domed observation cars ​which​ ​offer​ scenic and smooth land travel for its cruise passengers all the way ​from Fairbanks south 260 miles to Anchorage and the adjacent port of Whittier. This effectively makes Princess Cruises the most fully integrated Alaska tour operator, able to provide cruise passengers with an in-depth and seamless land and sea tour of Alaska. Plus, Princess Cruises offers an extraordinary Cook-my-Catch program which was fabulous, from the fishing all the way through to the magnificent presentation of our wild salmon and the enjoyment of savoring our own catch for dinner. Please see our related article “Our extraordinary land and sea Alaska Cruise“. 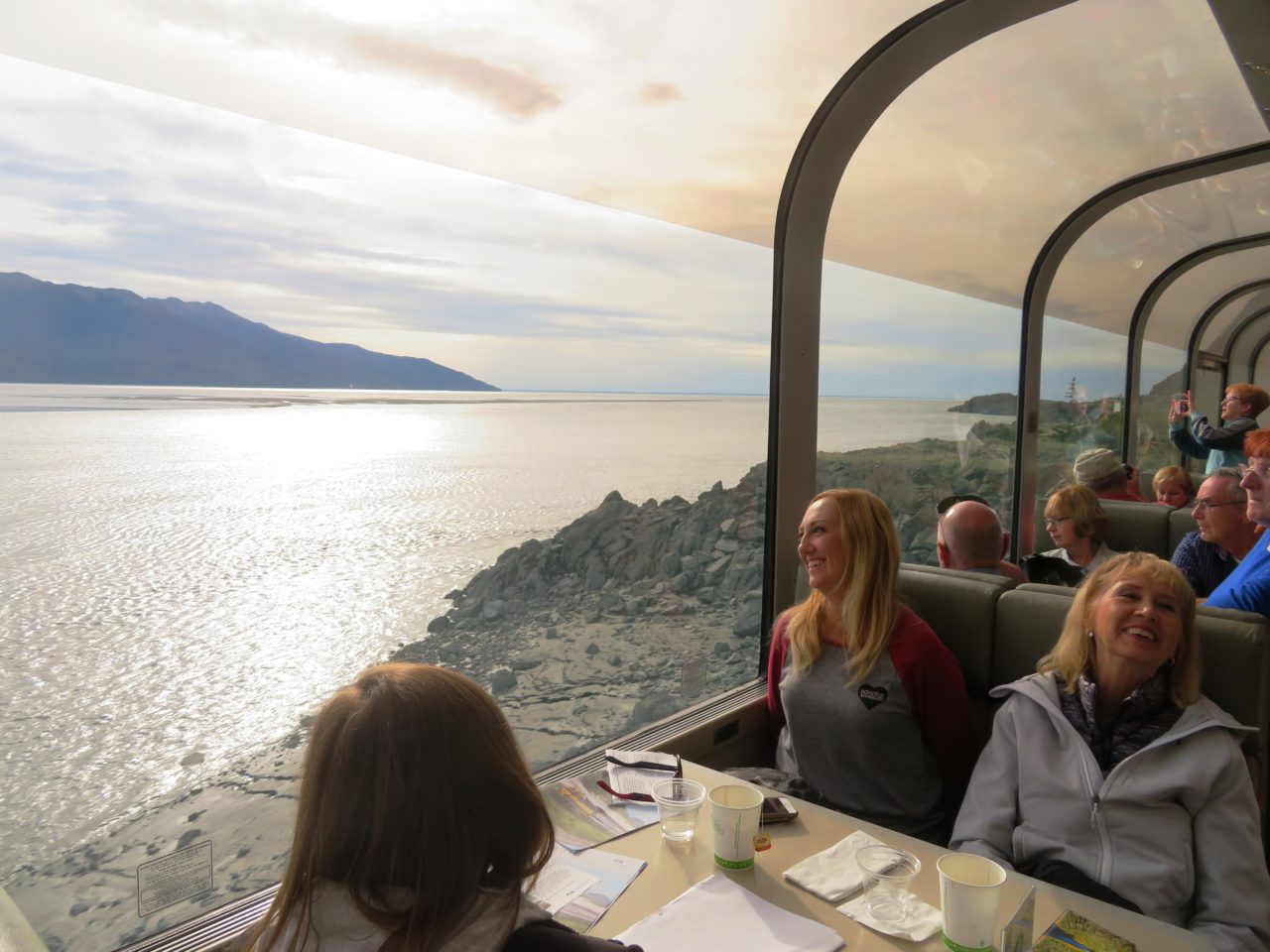 ​​My brother, Simon, and I were so impressed by the comprehensiveness of the Princess Cruises offering that we came back from Alaska eager to return again to experience more. ​ ​A​n Alaska Cruisetour can be the adventure of a lifetime for all tourists … as long as ​you​ start ​- or finish -​ your Alaska Cruise Tour on land! 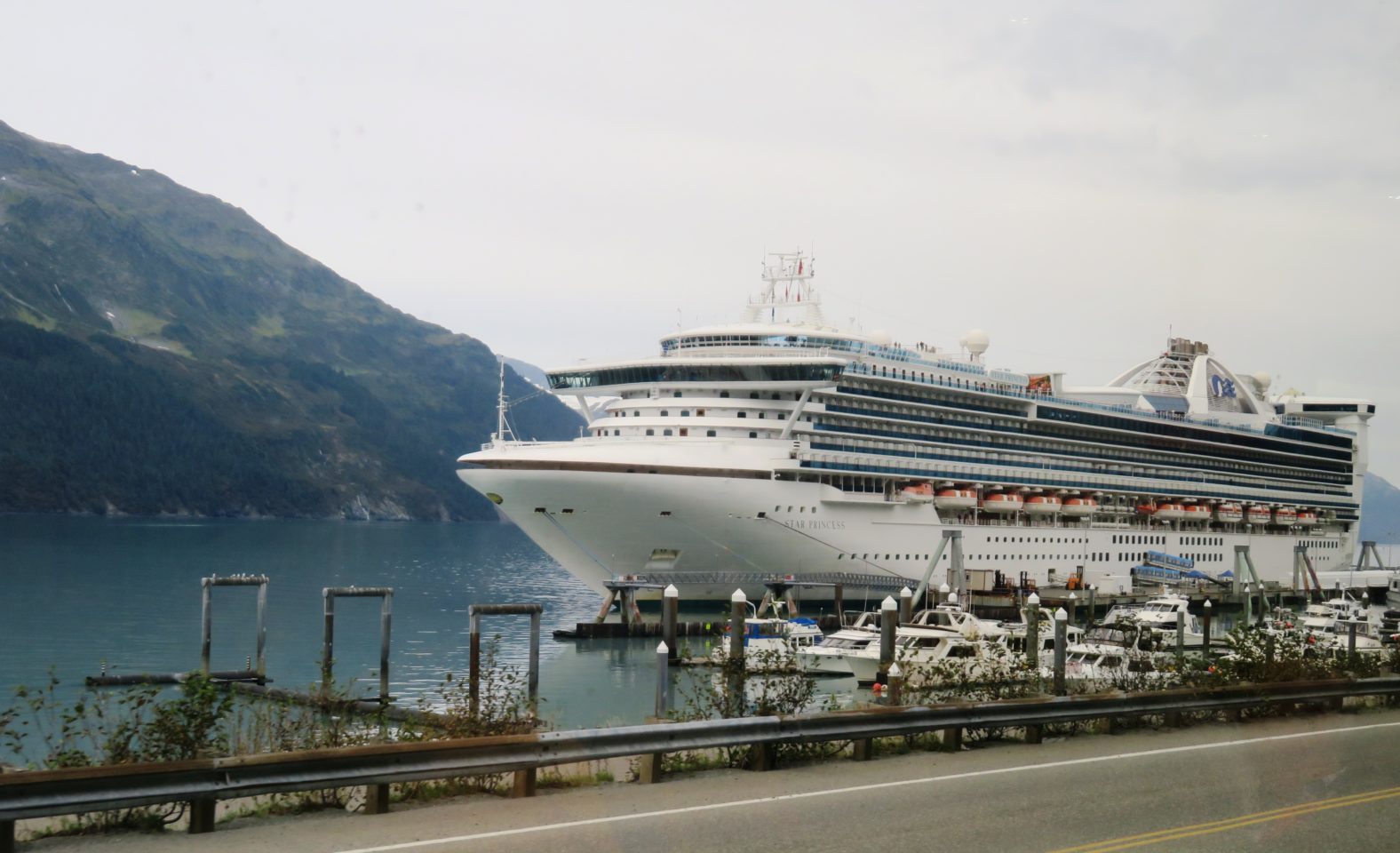 Stay tuned to BonVoyageurs.com for our writings about other Countries of the World as we share our joie de vivre from around the world. Luxury escapes, cruises and city breaks to Québec City, New York, Washington, Buenos Aires. In Europe and the Mediterranean, places like Paris and Nice in France, Florence, Rome, Napoli and the Amalfi Coast in Italy, Tel Aviv and Jerusalem in Israel. In Asia, countries like China, India, Nepal and so much more!
« Paradis Latin … Sophisticated Sexy French Cabaret
Broadway Up Close & Personal: A Review of Feinstein’s / 54 Below »