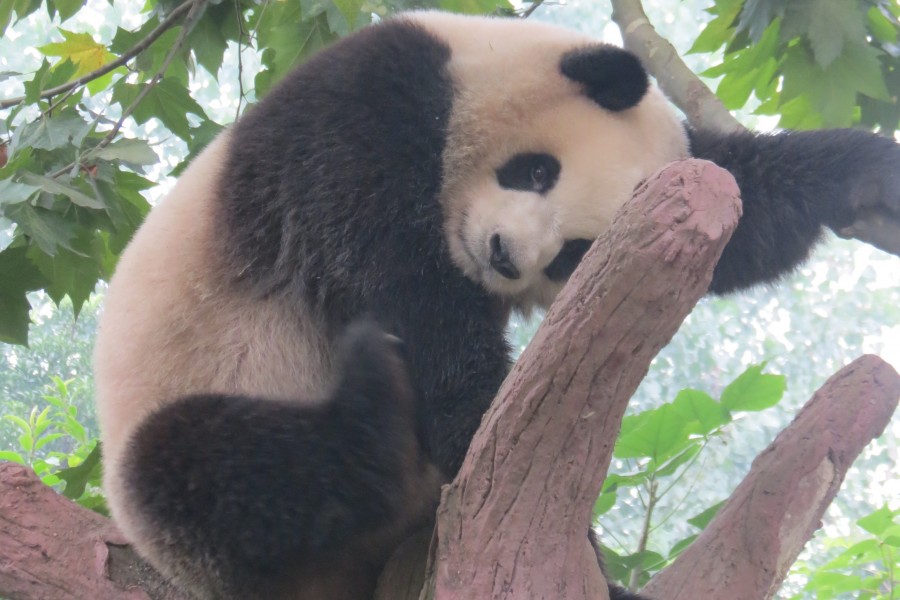 Read the previous posting at “Chengdu China : capital of Sichuan!”

Since we were staying at the Shangri-La Hotel Chengdu, we had made reservations at the very formal and top-rated Shang Palace hotel restaurant, where they serve Chinese cuisine at its finest, but at the last minute decided to take it easy and have room service instead. “Yes, I will hold” I heard her say as I focused on the CNN breaking news report of a deadly earthquake in southwest China. Wait a second, isn’t Chengdu in southwest China?

C-R-I-S-P-Y, I heard Lynn spell out in a slightly elevated voice. I turned around; “she is getting someone who speaks better English”, she said. Where exactly is this earthquake which has caused 43 deaths, I thought to myself as I cursed the slow bandwidth connection available at this hotel. “I want to know what crispy lettuce is”, Lynn was keeping at it as she was now being transferred to a third person;  there clearly was some frustration showing in her voice. CNN had switched its coverage to the murders in the French Alps. “Listen, you are the fourth person I am being transferred to”; there was no mistaking the irritation in Lynn’s voice. What happened to the earthquake report? I asked myself as Lynn suddenly stood up: “Listen, I am paying a fortune a night for this room; I want to know what crispy lettuce is”.

“Oh, you DO speak English”, I heard Lynn say. Finally, I thought. It turns out she is speaking to an Australian working at the hotel, who slowly and at length explains the room service menu items to her and helps her select our dinner. He does not recommend the local dan dan noodles for me, as they are spicy, but suggests the won ton noodle soup.  I know what that is, I am thinking to myself, as I furiously switch the tv channels to find something about the earthquake. Lynn finally finishes with her room service order; where are the bathrobes, she asks. I look in the closet but find that there is only one bathrobe, and there are always two in a Shangri La hotel. So, I pick up the phone. “No, not a battery, a bathrobe”, I am heard shouting into the mouthpiece.

As I hang up the phone in frustration, it starts ringing. Please open your door, a sweet young voice says, which I do. Standing outside our door is the executive chef of the hotel, Peter Trewenack, an Australian, together with a hotel waiter and our room service dinner on a rolling table. Except that it is not quite the dinner we ordered; he took the liberty of adding to it an extra dessert and two fruit platters.  And so there would be no doubt as to what a crispy lettuce was, there are two gigantic bowls of it on the middle of the table. We chat for a bit, and as he learns that we are thinking of doing a Shangri La Hotel tour of Asia, he invites us to contact him so that he can make sure we are properly received when we do. As he prepares to leave, the door bell rings, and I let him know that it’s probably either a battery or a bathrobe!

It was a bathrobe, thank goodness. What followed was a feast of a room service dinner like we had never had before, drowned  of course with the bottle of wine which we had received as a welcome gift.  According to Lynn, the sesame peanut salad dressing for the crispy lettuce was the best she has ever had. Lynn loved the dan dan noodles of Chendgu and I could not believe how fabulous a dish the won ton soup was; it did not resemble in any way what we get in the States and was a meal in itself. No wonder I could not finish the chocolate (yes, chocolate) cake dessert Peter had given us.

I still don’t know where exactly that earthquake was, and I have not even begun to tell you about the fabulous day we had at the Giant Panda Center. But I can tell you once again that the Shangri-La Hotel Chengdu, like the rest of the Shangri-La Hotel chain, is my home away from home when I travel in China !

Read what happens next at “Panda Bear keeper for a day!”