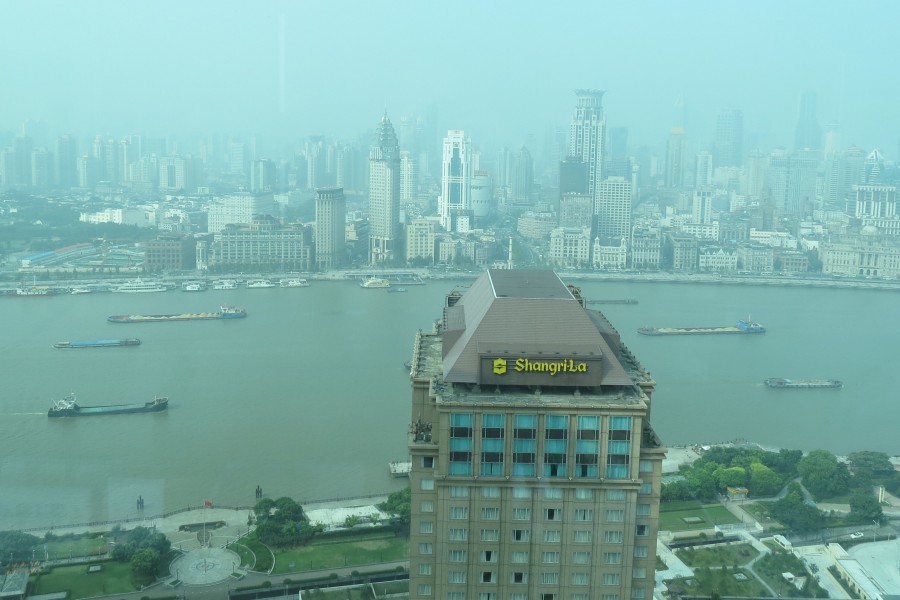 Yichang to Shanghai …. and our home away from home at the Pudong Shangri-La Hotel

Yichang to Shanghai via Shanghai Airlines.

Our Chinese is getting better; sao dan (wait a moment), pu yong shie (you’re welcome), pie tan shin (don’t worry) are some of our latest additions.

And I can’t believe how fantastic the music played on the Chinese cruise ship’s speaker system has been. A tremendous mix of relaxing, varied music from the world over; I would have liked to meet whoever put this together.

One disadvantage of being on a Chinese cruise ship is the difficulty in finding out what’s going on. When everyone is together in the dining hall or in the lounge, for instance, and an announcement is made about the day’s program or a change in schedule, that announcement is first made in chinese and then repeated in english. Unfortunately, as soon as the chinese language announcement is finished, everyone (since they are all Chinese save the two of us) starts talking loudly about it so that we can’t understand what the chinese announcer is trying to say as he is repeating his announcement in english. He would be very difficult to understand even if everyone was silent given how poor his pronounciation is; but add to it the noise of the conversation of 300 chinese and one does not stand a chance to follow what’s going on.

It turns out that I did miss the crossing of the Three Gorges dam locks. When I woke up, our ship was docked downstream from the dam; for the first time during our trip, internet reception on my hotspot was spotty there. At breakfast, our new friends from Guangzhou issued an invitation for us to visit them in  Guandong. I took the opportunity to give a good tip to two of the waiters who had taken such great care of us during the cruise. We then retired to our cabin to pack up our bags and basically pass the time until the ship makes its last run down through the third gorge, Xiling gorge, before docking in Yichang.

The ship was running behind schedule, and it looked like we would not have time to have lunch in Yichang, but would have to drive straight from the ship to the airport for the flight to Shanghai. Lynn called room service to ask for bananas (sorry, out of bananas), or anything else they might be able to put together for us even though we had already checked out. We waited for a while and were about to give up when one of the waiters we had tipped that morning shows up carrying a platter of two club sandwiches, banana bread and potato hash brown. On the house, he says.

The run through Xiling gorge was made in foggy weather, yet again, and with the ship going downstream quickly in order to make up some time. We spent half of that time carrying our luggage down to deck one and positioning ourselves for a quick exit once the ship docked at Yichang. I have never liked the last day of a cruise and this was no exception. All the services shut down, the hallways are full of suitcases, the lounges full of people with their belongings, and, in my case, you worry about how to handle the departure from the ship upon docking in Yichang. How will I get our luggage off this ship?

We were among the first to go through the exit area when the ship finally docked in Yichang, about an hour behind schedule. As we were making our way down the last corridor before exiting the ship, a group of guides boarded the ship as well as a ban ban porter whom I quickly grabbed. Again, he used the stick across the shoulders system to carry both of our suitcases out of the ship up a steep slope towards the parking lot where our driver was waiting.

My verdict on this whole cruise down the Yangtze river, from Chongqing to Yichang: by itself not worth the money nor the time.  I think that Western cruise lines are investing heavily in building ships for this cruise route  and they will make it a popular destination like Alaska or the Norwegian fjords, but a cruise down the Yangtze river should not be mistaken for visiting China just like looking at an Alaskan glacier or stopping in Ketchikan does not tell you much about life in the United States.

We headed straight for the Yichang airport, so did not get a chance to visit Yichang itself, a “town” of one and half million people. We drove past the new Yichang train station whose size astounded me; the width of that station building must have been several football fields. An interesting comment our guide made along the way was that the status symbols of the new middle class in China seems to be a BMW and a membership in a golf club. I wonder how many golf clubs have been built in Yichang?

The first class setup at the Yichang airport was reminiscent of the old days, in that first class passengers not only have their own lounge, but they also go straight from the lounge through their own private security check and their own entrance onto the boarding corridor to the plane; and a beautiful young woman in traditional chinese dress accompanies you during the whole process. This is as convenient as you can get, and used to be the way things were done in the China I used to travel. I was glad to see it has not completely disappeared yet.

We were flying Shanghai Airlines this time around for the one and a half hour flight from Yichang to Shanghai; we left fifteen minutes early and landed fifteen minutes early at the old Hongqiao airport in Shanghai. But this was not the old airport I knew as we taxied at the vast and modern terminal two. In one swoop, we went from rural China to twenty first century China.

Steven, our guide for Shanghai, commented on the way from the airport to the hotel  that in 2008, four years ago, someone counted more than 4,000 buildings in Shanghai with more than 20 stories each. I wonder what the number is now. He also mentioned the tallest building in Shanghai, the World Financial Center building, at 100 floors and 492 meters high, and its nickname, the can opener building; one look at the building and you will understand.

The room we have been given at the Pudong Shangri La hotel is just out of this world. It is on the 34th floor and overlooks the Bund just across the Huangpu river. Our bedroom is a long rectangular room whose long side consists of floor to ceiling windows offering a panoramic view of the Bund and the Huangpu river. I can’t think of anyone in Shanghai having a better view of the city. This certainly compares with the view of Hong Kong island from the Kowloon Shangri La.

We were escorted to our room and to the Horizon Cllub lounge by the assistant manager of the hotel, who happens to be a Canadian from Vancouver. He mentioned that the Shangri la hotel chain is planning a push into the North American marketplace and that is one of the reasons he was hired. After I had inquired from him about the tea used for the welcoming teapot provided to guests, he later came back to see us in the Horizon Club lounge to say that he had telephoned both the Kowloon Shangri-La Hotel and the Xi’An Shangri-La Hotel, and that they both were using Mo Li jasmine tea.

Yes, our box of dark chocolates was waiting for us in the room with a happy anniversary card. But then, after we came back from the happy hour at the Club lounge, we found another chocolate gift waiting for us, this time a tall sculpture made out of chocolate surrounded by sixteen chocolates in the form of a heart. Another superb welcome from Shangri-La Hotels !

Read our next posting at “Shanghai : The future of China!”