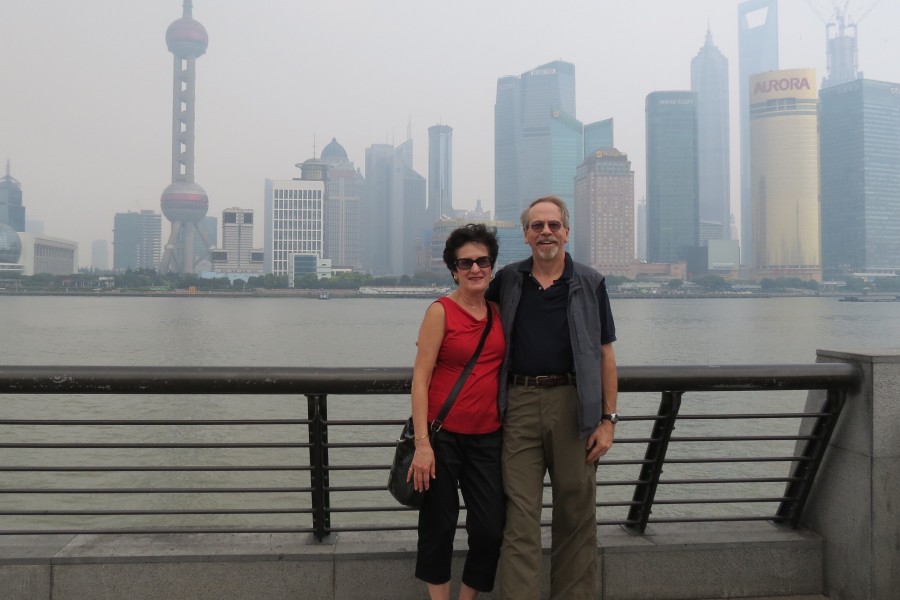 Shanghai the future of China

Shanghai : The future of China!

Read our previous posting at “Yichang to Shanghai via Shanghai Airlines!”

Shanghai, what a city! What progress Shanghai has made since I was last here. Shanghai is without doubt a world class city. I am sitting here at my desk in our room at the Pudong Shangri-La Hotel with a phenomenal panoramic view of the Bund and the Huangpu river, wondering what to say about the day we have just had in one of the  liveliest cities on the planet.

Our day started with a leisurely breakfast in the Horizon Club lounge on the 29th floor, after which we met our guide and driver and proceeded to our first stop for the day, the Oriental Pearl Tower, a very tall structure with two circular observation areas about 900 feet high providing fantastic views of all Shanghai; the lower observation area has a glass floor which Lynn did not dare to step on. Skyscrapers as far as the eye can see. Near the tower are the skyscrapers where Mission Impossible 3 was filmed, and where Tom Cruise crossed between two skyscrapers on a wire, an invaluable piece of information which makes the scenery that much more alluring. And at the foot of the tower is the Shanghai History Museum, which recreates the history of Shanghai in a most captivating manner. I could easily have spent the day there; it is extremely well done. You do need a piao (ticket) to get in.

Near the Oriental Pearl Tower is the Convention Center, which locals say was built to hide the unattractive chicken feet of the tower. According to our guide, the three most popular sports in China are, in order, soccer, basketball and ping pong.

We then drove across the Huangpu river to the Chinatown area, so called by the foreigners here because of its archway typical of so many Chinatowns in America and its reproduction of ancient chinese buildings. Nowadays, it is a maze of streets full of tourists shops and restaurants surrounding the famous Yu Yu an garden of Shanghai, which was our actual destination. In one of those streets, we walked past Xinxiang steamed bun restaurant, which our guide says is the most famous place for Shanghai’s xiaolongbao (Shanghai steamed dumplings); there is certainly a long line of people waiting to buy dumplings from the stall and eat them on the street just like we would eat a hot dog.

We had been forewarned by our guide about the unrelenting harassment in Chinatown by people putting beautiful pictures of watches or other products in front of us and offering to bring us to shops where we would find the most amazing deals. In practice, tourists who fall into that trap are led to a closed room which is then locked until the tourists buy some fake products at very high prices; they are locked in “because the police is outside and would stop them from offering these fabulous deals”.Alternatively, tourists are offered the chance to see a traditional chinese tea ceremony. The results is the same; they are trapped until they fork out a large sum of money. One learns quickly how to say “Wo pu yao” (I don’t want) in a firm manner.

At the beautiful Yu Yuan garden, a large walled complex of beautiful and peaceful gardens and traditional chinese houses built in 1559 by a chinese official, Mr. Pun, Lynn gets the chance to feed hugely fat Chinese carp as well as admire Japanese koi fish of a similar size. We also try our luck at the wishing waterfall, where, after making a wish, and most importantly after you uncover where the four stone dragons are hidden among the stones, you throw a coin onto the stones; if your coin stays on the stone, your wish is granted. If it falls into the water, you will just have to wait for your wish to be granted.

We then make our way to a nearby restaurant, Din Tai Fung, for lunch. I knew of that name; it is part of a chain of Taiwanese restaurants specialized in and reputed for their dim sum. In our case, we are interested to go there to taste the most famous Shanghai dumpling of them all, the shie fun xiaolongbao (steamed dumpling with crab meat), as well as the niaorou mien (Shanghai beef noodle soup). Lynn always has green vegetables with her meal, so we order some jie lau as well. To drink with that, we go for Long Jing cha (Dragon Well tea), the number one tea in China which comes from the city I know best Hangzhou (where I created a joint venture years ago). Interestingly, our guide puts down the teapot with the spout aimed straight at me; oh oh, have I become a male prostitute? Upon questioning, he says he has no knowledge of this “superstition”, just another of those Beijing ignorant beliefs. Interestingly, this restaurant, like others I have seen during our trip, has chair back covers which waitresses bring and set up whenever they see something like a purse of a bag on a chair; the cover protects both the back of the chair and the belonging from being either snatched or forgotten.

I should also mention toothpick etiquette in China. Most men use toothpicks here as I do, probably as a result of decades of sub-standard dental care; but they all use toothpicks in the same manner, using both hands, one for the tooth pick, the other to hide the first hand and the toothpick. It would seem that it is very bad manners to let other people watch you in full toothpicking mode.

Everything is made fresh daily at Din Tai Fung and you can even watch the whole process of making steamed dumplings behind a glass window. I am able to not only get the bill (maitan), but also get a receipt (fa piao). And the te suo (toilets) are spotless and high tech; I used to take photos of the toilets I went in but that was purely professional necessity. I have now given up the practice, although it would have proven most interesting (at least to me) on this trip. I can just imagine Lynn’s reaction to slideshow of chinese toilets in our family room.

After lunch, we drove to the Bund, the most famous area of Shanghai if not of China, that semi-circular stretch of about 1.5 kilometers along the Huangpu river with a broad boardwalk and the most important colonial buildings of the British concession in Shanghai.  The custom house and the chinese “Big Ben” (which we heard ringing as we walked by) are some of its most famous buildings. We also gave some attention to the Sasoon building, with its green triangular top, built by a rich Jewish family; we were unaware that a contingent of Jews who fled the second world war in Europe found refuge in Shanghai after being denied entry into Japan. Our guide says that the current prime minister of Israel, Ben Netanyahu (a classmate of Lynn’s at Cheltenham High School), was born in Shanghai; neither of us was ware of that fact. I will need to verify that.

We then head for Renmin square (People square), which used to be a racetrack in colonial times, and now is the center of Shanghai. In its midst lies the circular Shanghai museum; but that is not our destination. We are going next door to the Shanghai Urban Planning Exhibition Hall, which houses a huge small scale model of the whole city as well as offers a 360 degree helicopter-ride movie of the city. We discover the site of the 2010 World Expo, the size and location of Central Park (based on New York’s central park), the main areas of expansion of Shanghai over the past 20 years and its plans for the next 20.

Unfortunately, the Exhibition Hall is located right next to a major shopping area of Shanghai, and we could not resist taking a walk through a couple of department stores just across the street. They are humongous and filled with goods from all over the world. We were looking in particular for some products of interest to Dominique, relative to her startup business. I take notice of the broad boulevards, the broad tree lined sidewalks; my goodness, this is becoming such a beautiful city.

We then retreated to our hotel, for a quick rest before our formal dinner at Jade on 36, the French restaurant on top of the Pudong Shangri-La Hotel, where we were greeted by the Chef, Frank Elie.  He basically explained his creations and helped us choose our menu; this was not chinese food, this was original French food at its most creative. I decided on a Gigondas to go with the veal and lamb dishes we had selected; that proved to be an excellent choice. Our table was by the window overlooking the Bund and the colored boats plying the Huangpu river, a sight unequaled anywhere in the world.

Read what happens next at “French Concession Shanghai !”